Kill monsters, sleep with the pretty girls, and (most of all) run errands for every townsperson you meet. All in The Witcher Enhanced Edition. 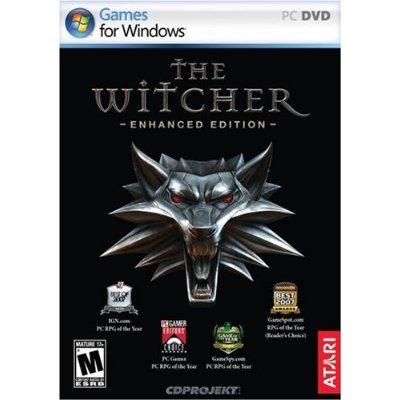 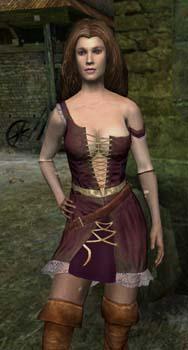 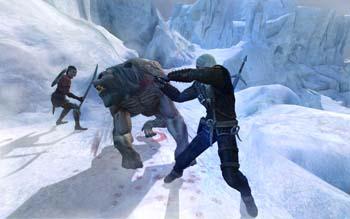 The Witcher: Enhanced Edition is an enhanced version of (duh) The Witcher featuring improved graphics and extra quests. In the interests of full disclosure, I have not played the original version, so any comparisons will have to end there, as that's all I know of the differences between the two.

Plot: Your character, Geralt, is a Witcher. Apparently, Witchers are sorcerers that fight monsters. Or warriors. Or Mutants. Or some combination of the three. Suffice it to say, he's an all-around fantasy hero, with both swords and spells to work with.

An attack on Witcher Headquarters starts things running, as our hero and his buddies now need to pursue the bad guys to recover stolen magical artifacts and exact revenge. Along the way, you'll have the opportunity to sleep with half the women in the countryside, slay legions of monsters, and interact with a wide range of non-player characters, most of whom want to use Geralt as an errand boy.

Game Play: A fairly simply mouse and keyboard system is used for combat and movement. Click on monsters, and Geralt will kill them. You can use keyboard commands to set different attack styles, depending on your opponents, but basically it comes down to clicking on the monsters. Extra damage can be done if you click at just the right time.

At the start of the game, the slow pace of combat almost made me quit the game. Geralt seems to take five seconds between sword strikes. So while combat and movement are in real-time, in theory, it feels more like a turn-based system, and a slow one at that. Combat is slow, boring, repetitive, and too frequent in the game's prologue, and the game suffers for that.

Once you get out into the countryside, and get some different attacks under your belt though, combat noticeably improves. Geralt gains access to magical potions that he must brew, and magic spells that can be cast with a right mouseclick. These advantages make combat much more tolerable, and Geralt's skill with a sword improves as well, making him much smoother on the attack.

The game is structured around quests that you discover along the way. Most of these are either of the 'kill 10 of these monsters' variety, or the 'fetch this object from this person' type. Some are optional, some are required to advance the plot. These can get repetitive after a while. Luckily, the games map can be used to add a pointer that shows you where to go next for a given quest. This helps reduce the random wandering in the wilderness.

Geralt often must make decisions on how to handle a given situation that affect the game's plot. So there is a feeling of affecting the storyline, instead of just walking through the story that is appreciated.

One last note is the inclusion of sex. Geralt has the opportunity to sleep with many of the women he meets along the way. Once he does, he is given a trading card with an image of his lover. This seems like a very insensitive, even misogynistic, approach. But this is the character and world they want to depict, and somehow the immorality of it fit in with the rest of Geralt's world.

Graphics: Graphically, The Witcher is a treat. Faces are highly detailed, especially during cut scenes. Load times as you pass area boundaries are not bad. The game incorporates day and night and weather, so that keeps the world looking fresh and ever-changing.

Monster designs seem a little more original than many RPG's. While some of the archetypes will always be in these games, they at least came up with new names and altered looks for them, instead of sticking with 'orcs' again.

Sound: The voice acting is adequate, but nothing special. Although apparently some of the broken English from the first release is fixed in this one. Some of the sound effects, especially during combat, will grate on your nerves after the 1000th time you hear them.

While wandering in the wilderness, there is a nice ambient soundtrack going, which helps sell the look of the world.

Replayability: The plot-driven nature of the game seems to make replaying it unlikely. I can't imagine running all those errands again, and the thought of replaying the prologue drives me nuts.

Conclusion: I really want to like this game. I think it's a good game, but the combat system, especially in the prologue, needs serious work. Combat just seems clumsy and unfinished. But overall, the world and story can make up for any deficits and the game offers a good RPG experience.
Review Page Hits: 1 today (793 total)
mediahook