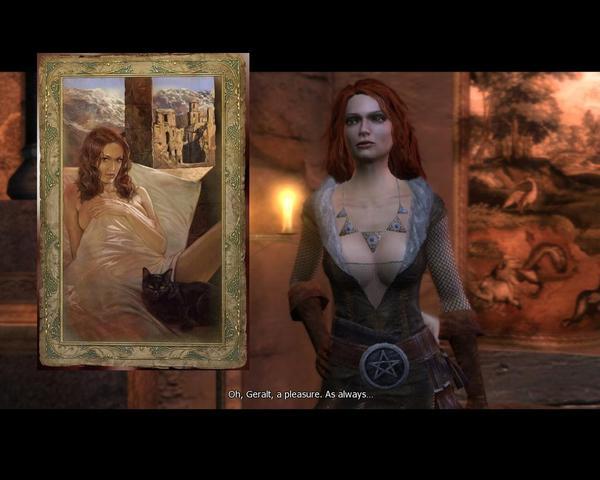 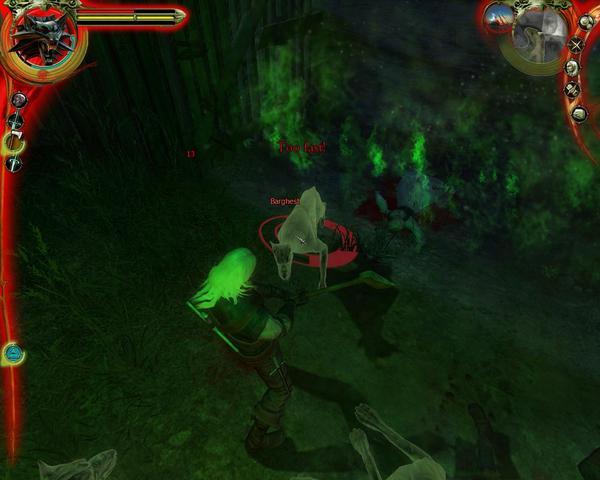 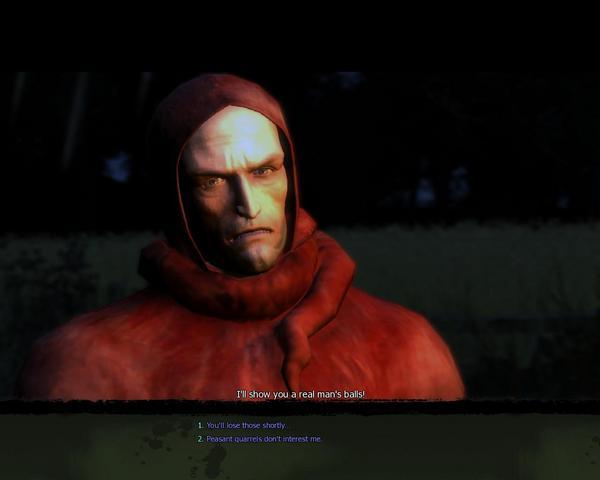 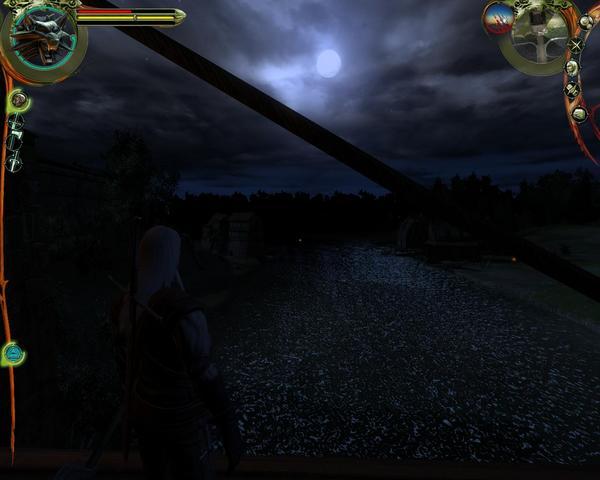 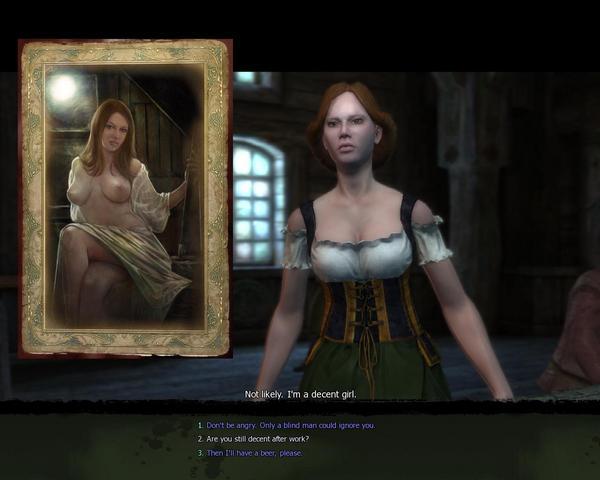 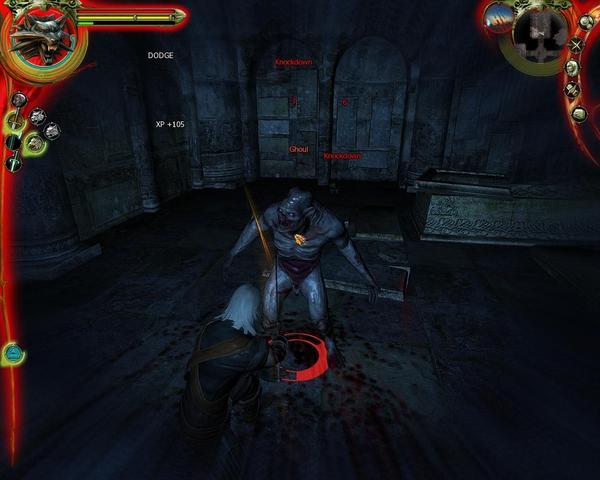 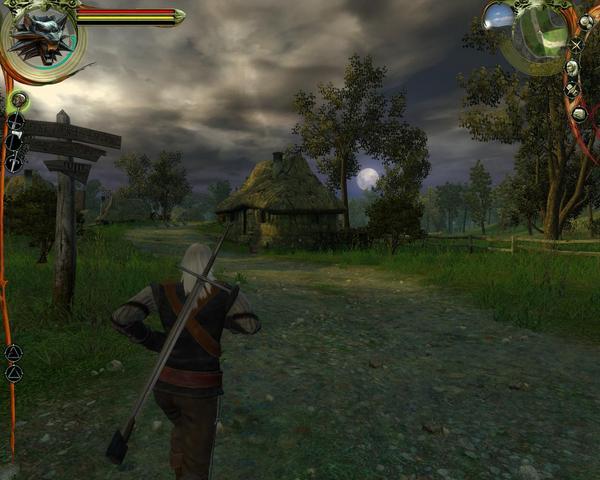 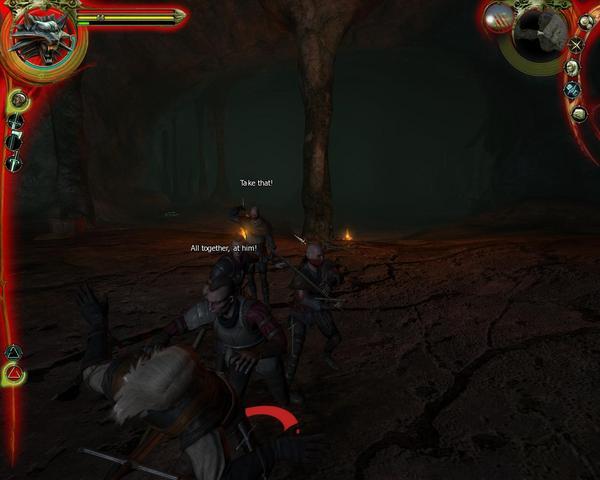 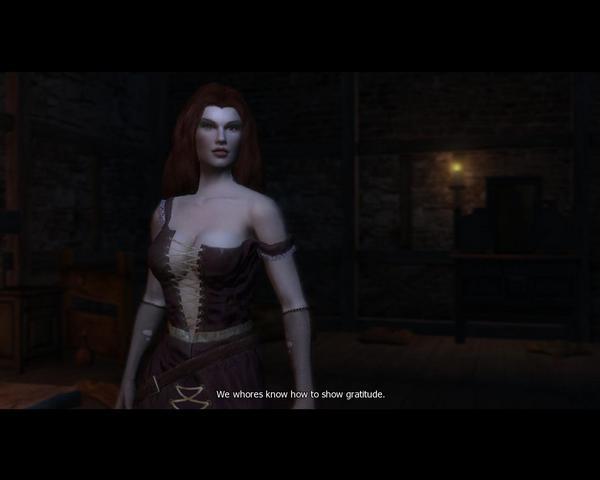 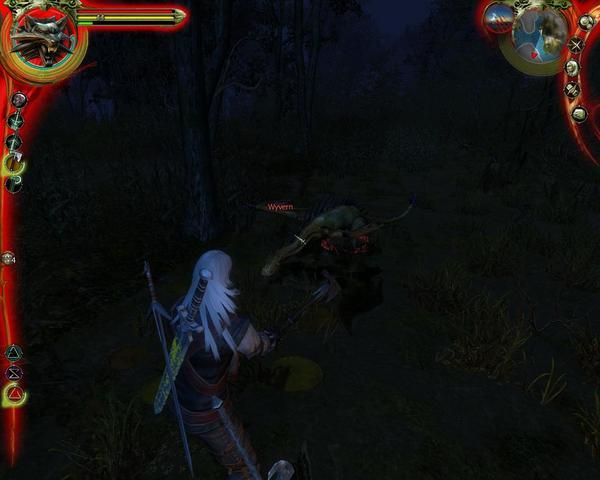 Like the first date, let's get sex out of the way, yes I wish too! But I don't know what dating is like in Poland, but if this game is anything to judge by, it's easy. Women are treated like trading cards, and that's what you get, for the numerous women you'll be sleeping with.

But it's not all good. For the first part of the game, I had no idea of the storyline, as getting these trading cards seems to be the main goal. This does distract, and on the same hand adds something too. As there are many a humorous moments in Geralt's life, and his conquest.

One such girl called Vensa, who early on the game will sleep with you if you walk her home. Admittedly it is through a wolf beast infested forest, and also the cut scene, while you see nothing, is very humorous. But approach her again and she'll retort "What kind of girl do you think I am?" This leaves you even more confused, as I thought we'd already answered that?

Beside the odd perception on women, the cultural divide is non-existent. The developers, CD Project Red, have done well, as games from the east can suffer in translation. Even still there are small quirks that remind you of its native language, such as upstairs is "Stairs up!"

This game starts with cut scenes after cut scene. It's a full 20 to 30 minutes before you are given full reign. Even then it tries to wean the user off slowly from yet more cut scenes. This part is highly annoying, and not always a good start to any game, even if it does set the mood. The main character and the times are all portrayed well. But personally I want to get straight into the game. But thankfully the majority of these are at the beginning; afterwards they are confined to crucial story moments.

I have to say the art and style is fantastic, everything looks as it should, even if it's a little clean for the period being portrayed. The peasants look realistic (though some questions could be raised about the hot looking ones!), monsters look scary and believable, houses and architecture also look rustic and of the period. Even the trading cards of the women you sleep with have the look of lithographs (Early French Pornography!). Even though the game is heavily steeped in fantasy, nothing is out of place. And the night sky is often fantastically drawn, almost to the point of realism.

The gameplay is very involving; it gives the player a great sense of choice, or perhaps the illusion. One such conundrum is the Abigail story, accused of being a witch, and the villagers want her blood. You have to choose a side, and of course you have just slept with her. The thing is, she is a witch, and she played some part in the crimes. However does she deserve to be fed to an angry mob, which is just as guilty as her? Be careful in your choice, because to this day, I am still not sure if I made the right decision!

This also leads to the other more important question! Did I fail that quest? It's funny that gamers are often portrayed as desensitized violent criminals, when more often than not; we often make the right choices in games. We are brought up that way, I know from time to time, its fun to play the bastard, and games allow us that opportunity. But to progress, we are often guided to make the right choice, the morally correct ones, and that has been the way of games since the beginning.

Often will Geralt say things that we all often think, but are too polite to say! This game gives a very good impression of allowing wrong to win once in a while. Of course as the game grows, you can guide him, to be a little less of a bastard, but even still there are times when you wonder if you have made the right decision.

The combat style has been criticized and praised. It works by using timed clicks, to initiate swiping moves of your sword. The time between the click ranges from 1-3 seconds. To be honest, I am not fond of it myself, while I applaud them for the new approach. I think it should never be used again. The problem I have with it is that, while furiously clicking your button, even though it has no effect. Makes you believe the urgency of the battle, giving you that tired fight feeling, or at least it does in your finger. However these timed clicks, distances you from the fight, you are a lot more controlled and feel less intensity.

At first the amount of items to be picked up is vast. Of course being new to the game you believe everything has a purpose. So you start to horde, as you play along, you start to get confused, especially when you realize that you have to start making spells and potions from this vast collection. Don't despair, after some time you will realize what is important and is not. While this could be seen as really confusing and annoying, I think it adds. It, with the free will notion, really adds to the whole question of choices.

The puzzles are pretty much the same as any other of this genre, and nothing new has been added here. Get a quest complete it, so on and forth. However the suspect cases are quite funny. This is where you are given the facts, and have to point your finger. At times in this game you are sometimes given the choice to back down. I don't know what it is about the way Geralt says things, but it always seems that he is too cowardly.

Geralt: "I caught you coming out of the mayors house, the wife says you did the dirty with her, I have a witness, and you smell of her perfume!"
Man: "Yeah so!"

Then you are given the options accuse, or need more evidence. If you choose the latter, you get a response like: "Yeah you're right, what was I thinking, I just can't go accusing people like that, it's not right!" In the background you hear the sound of a dog whimpering with his tail between his legs. This is the only moment that doesn't fit Geralt's character.

In the end, this game is good, and its many finer points can be debated for many a years. And sometimes, just sometimes, the one-liners can come off just a little cheesy. However, I like this game, but there is something missing, just some extra spark that doesn't seem right about the whole game. Is it bad, far from it, but I can't help but feel its missing something!
James