Wizards & Warriors achieves everything an 8-bit game could ever hope for. 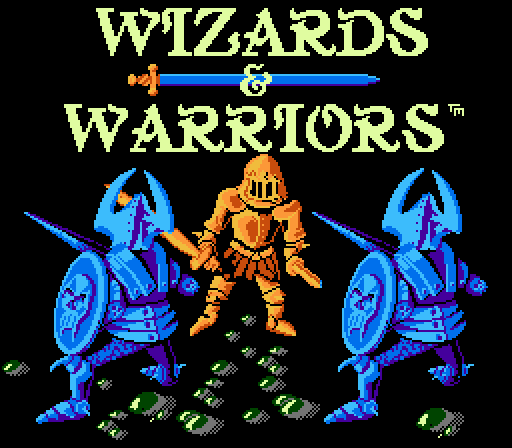 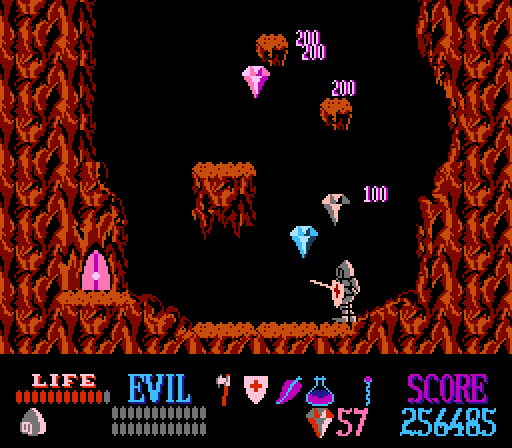 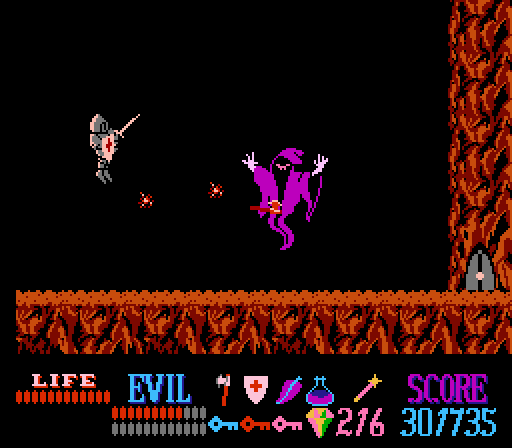 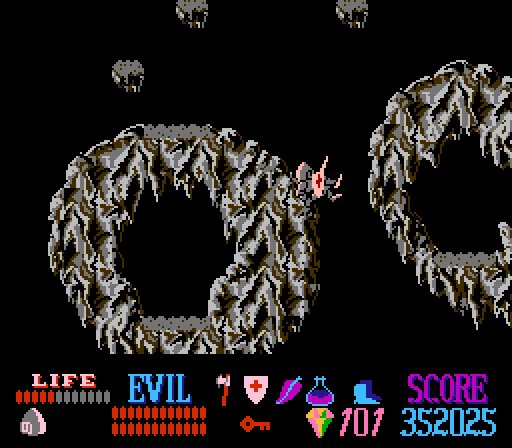 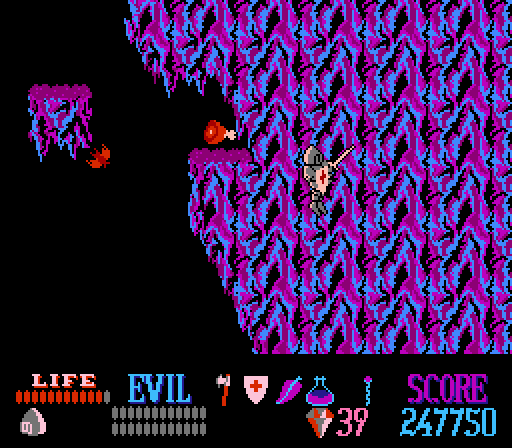 Wizards & Warriors is one of those games you can enjoy any time you've got an hour or two to kill. The game's premise is fairly straightforward - help Kuros gather enough gems to get through each level, then go take out the boss and save one of the many damsels in distress.

The plot is certainly not be a strong point of Wizards & Warriors, but it does have just about everything else going for it: Tight control, great level design, tons of secrets, and a great assortment of powerups to collect as you go. I would go so far as to say this is Rare's finest game.

That's right, Rare. You remember Rare. That company that made all those awesome games back in the day (like Wizards & Warriors) and then got purchased by Microsoft and hasn't made practically anything worth mentioning since? Yeah, that's them. Ignore the Acclaim logo on the front of the box - this is a classic Rare game, through and through.

One of the great things about Wizards & Warriors is that, with the exception of boss fights, when you die, you will start again exactly where you left off. The same holds true when you continue (though you DO lose all your points for continuing, so there is some incentive to the score oriented to get as far as they can on a single credit). You also have unlimited continues if you should need them. Also, there are no bottomless pits to fall in, unlike so many other games of the time. Because of these reasons, the game isn't particularly difficult with the exception of one of the of boss fights if you're underpowered, so most seasoned gamers will probably be able to beat the game with little trouble.

The levels are generally fairly large and require some exploration if you want to find all the keys and open all the chests on each level. The chests most often contain gems, and every level has a set number of gems you must collect in order to proceed, ranging anywhere from 50 to 200. Other items to be found include the Wand of Wonder (which shoots out a freezing ray), the Potion of Levitation (which allows Kuros to get an extra few inches off the ground before making a jump), the Boots of Force (powerful boots that can be used to open locked chests, or deal 3 damage to enemies at close range) and quite a few more.

There are a couple items that are extremely useful throughout the game, but are only available in certain levels: The Feather of Feather Fall in Stage 2 and the Battle Axe of Agor in Stage 3. They're fairly difficult to get to, but well worth it, as the Axe does twice as much damage as the standard throwing dagger, and the Feather makes landing difficult jumps much easier.

It's always fun to find secrets in games like this where there's such a large focus on exploration, and Wizards & Warriors has three different kinds of secrets. First off, there are hidden gems which function sort of like a Super Mario Bros. coin block (you keep jumping and bumping to collect gems until they run out). Secondly, there are hidden doors that you can find, which take you to rooms filled with gems, and a much needed respite from the constant danger outside. And lastly, there are certain spots you can stand or jump at which will cause a treasure to come out of the ground. You get no gems for this last kind of secret, but they are worth lots of points!

There are two major bugs in the game that push it a little further from perfection, though. First off, in stage four (the massive purple cave level), there's a bit of meat sitting in a little alcove where you can't quite jump (it is directly to the right of the chest containing the perfectly useless Cloak of Darkness). However, if you have a speed potion activated, you can manage to get in there with some effort. If you keep moving to the right (through the wall as you can see in one of the review screenshots) and fall as far right as you can, you'll fall into an area where the game will crash, forcing you to reset.

The second bug isn't game-crashing, thankfully. It's more of an oddity than anything else. On the second forest level, if you go all the way to the far left end of the of the forest, turn and face right, and then rapidly activate and deactivate your Levitation power, you'll slowly inch backwards off the left of the screen and wind up in the first forest area (the very first level). When you beat the boss of this level (again), you'll notice that you've saved the damsel you would have saved in the second forest. If you then beat the second level again, you'll win the game and you never have to worry about the pesky skeleton boss or climbing the castle wall at all. And it makes clearing the game on one credit a whole lot easier.

Both of these bugs pretty much require you to know what you're trying to do, though, so it's very easy to avoid them and they would never interfere with a normal playthrough of the game.

It's easy, it's short, and the title is misleading (there appears to be only one Wizard in the game, not the several you'd expect when the plural "Wizards" is in the title) but despite its drawbacks, Wizards & Warriors is one of my favorite NES games. And like a great movie, it keeps me coming back every so often to run through it yet another time.
Review Page Hits: 1 today (405 total)
mediahook