Geometry Wars: Galaxies is an excellent transition from old to new with a bevy of extras that will keep fans engaged for a long time. 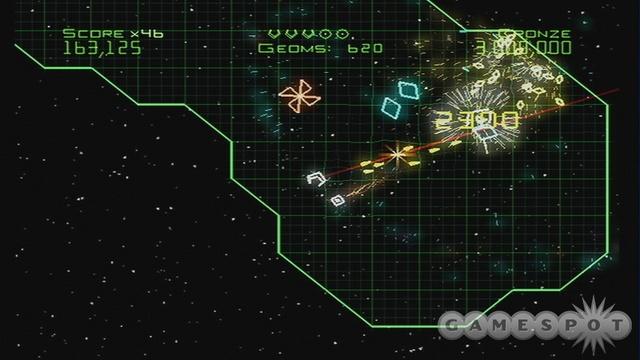 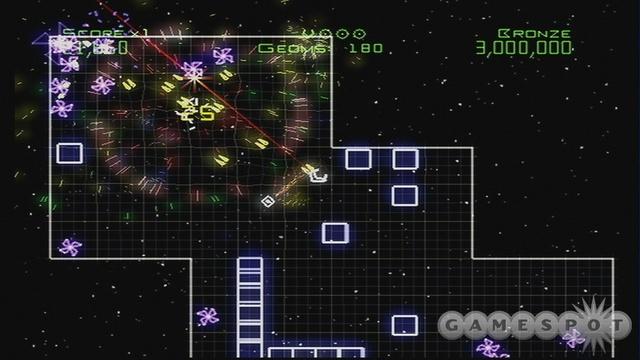 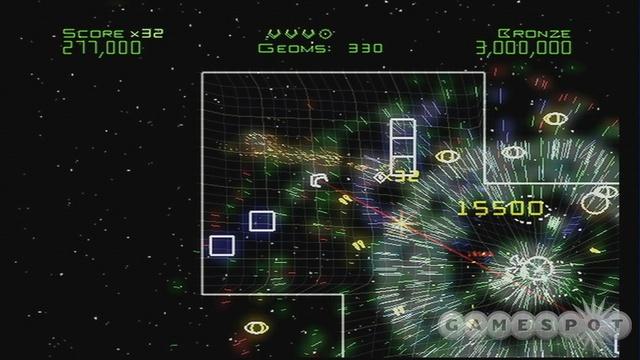 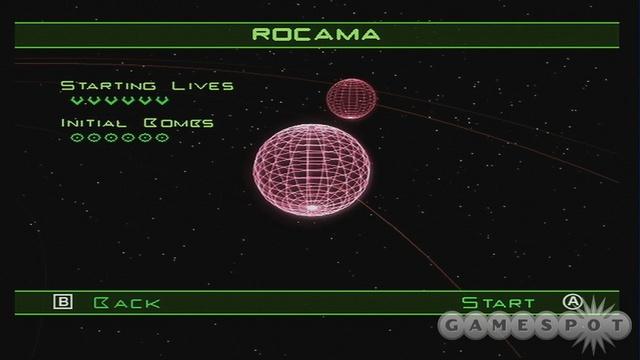 Who would have thought a mini-game hidden in a racing game would turn out to be one of the most popular and exciting games of the past year. Geometry Wars impressed everyone with its delicate controls and its trance-inducing visuals that seem to explode right off the screen. It's caffeine in gaming form, and once you start playing, you can't seem to stop. But surely, with Geometry Wars spending the majority of its life on the Xbox 360, things are looking up for Nintendo fans as Geometry Wars: Galaxies still gives plenty of shooting fun while adding new bonuses to keep you entertained for a long time.

For those who have never played Geometry Wars or have no idea what it is, don't be fooled by the name; it has nothing to with math. Prejudice aside, Geometry Wars is your average shooter with enemies that look like...well, geometry shapes. You constantly shoot swarms of enemies that all look like diamonds, squares, circles, stars and parallelograms (we know more about math than you think!). The concept is simple: shoot anything that moves or gets in your way. Surely it's easier said than done, but the further you go in the game the harder the enemies get, as more of them attack at once, black holes try to suck you into nothing, and some enemies will even try to ram into you, sacrificing themselves just to destroy you. The beauty about Geometry Wars is that no two games of it are ever alike. It's structured to your difficulty, meaning if you constantly hold down the fire button the game will send more enemies at you, but if you are a pacifist and conserve, the game will give you less enemies to deal with.

The game's simplicity is what makes it so appealing. The visuals are impressive, yet they give off a simple old-school vibe. The controls are as simple as using the two analog sticks on the classic controller. The only big problem with Geometry Wars: Galaxies, the mixture of unusual controls. If you happen to own a classic controller, by all means use that when playing, because the two analog sticks make it much easier to control. If you don't own a classic controller however, be ready for the fight of your life...in more ways than one. Instead of using two analog sticks for movement and shooting, you will use the Wii-mote and nunchuk for shooting down foes. Because the sensor on the remote could be infuriating to see sometimes, the game shows you which way you are shooting by giving your ship a red infrared laser in the direction it is shooting (which doesn't entirely help considering how nearly impossible it is to see when the entire screen is literally swollen with enemies). While helpful, it doesn't make up for some inconsistent stutters or the fact you tend to get tired a lot faster by waving your arms around than just using a standard controller to play.

The visuals pack a neon punch in every level of the game. From the moment you start, you will notice striking similarities to its original version as well as enhanced particle effects and enemy movements. In the latter parts of the game, the screen can be so twisted and convoluted with enemies, it will look like a '70s music video, complete with bright lights, flashing objects, and tons and tons of explosions. The music is still the same sci-fi drone as it was in the Xbox Live Arcade version, which is fine. But it would have been nice to have some sort of original soundtrack for the Wii version. Then again, when you're being swarmed by dozens of enemies and flashing neon lights, music is the last thing on your mind.

Visuals aside, Geometry Wars: Galaxies is much more than a ported version of the original. New to the Wii is a mode entitled Galaxies, which lets you earn special power-ups that will help you rack up more points. The points fly out much quicker in this round and the enemies also get much more aggressive. There are also new challenges thrown at you the further you get into the mode, such as blue waves that travel around the screen, sucking in anything that touch them, or enemies you can't see that shoot from the sides. Thankfully, you have a drone ship flying along with you to help you mow down any potential threats. While engaging in combat, certain enemies will drop tiny orbs called geoms, which when collected will allow you to earn special skills and powers for your drone. Many of these powers help increase the drone's attack, defense, or speed; but other cooler ones have it shooting in the opposite direction you are (which makes shooting enemies behind you a breeze), and sniping enemies from across the screen. Since you can only have one skill at a time for your drone, choosing which one to use can be both fun and infuriating.

Multiplayer also makes its debut in the series in Galaxies, and it is both engaging and exciting to play. VS mode lets you take on a friend to the death and after all lives are taken whoever has the most points wins. Co-op lets you two work together to take down the same swarm of enemies. The game gets a lot more aggressive in this mode, and geoms seem to drop a lot slower than usual, but its still great tons of fun to be able to have an extra helping hand unleash fury against those dreaded shapes.

Geometry Wars: Galaxies is an excellent transition from old to new with a bevy of extras that will keep fans engaged for a long time. The psychedelic visuals and addicting gameplay are fun enough that even the most hardcore gamer can enjoy. If you own a Wii and are looking for something to play this holiday season besides Mario, pick this game up.
Review Page Hits: 0 today (580 total)
mediahook