D, A Review For The Playstation Version 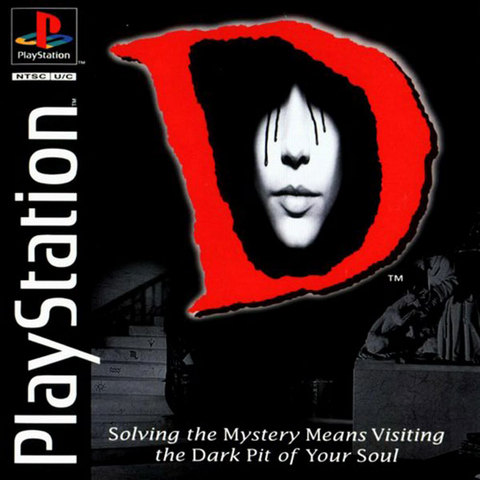 This review is for the Playstation version which has no bearing on gameplay as far as I know. It's the same game on other systems, the only difference is that system dictates how many discs your game has.

On to the review. D is a classic and a really great game. And if the game was released today I think it would be laughed at, fortunately for this gem though it gets to be classified as one of the firsts of its kind. And is a must play for any fan of the horror genre.

I did not find D scary, but at least it tried and had a decent atmosphere. After its release the game gained in popularity and spread to other systems.

Even though I am about to say some meaner things about this game, keep in mind that as awful as I may say this game is its still one of my favorites. I have about 5 of them all in the horror genre mostly and this is one of them.

The Game is for a more mature audience or at least was when it was created as it contains violence and maybe a little tiny bit of cannibalism, a big no-no for 1995. Kenji Eno, the man behind this Game, could not get it approved as it was so he submitted the master disc with a clean version of the game on it for approval. When it was approved, he took it to the US to have it manufactured, but switched the discs and had it released as he had intended.

This is why when you play it and see these things you may be shocked that in 1995 they released this, but they did not, at least not knowingly.

You play Laura after hearing of your fathers killing spree and you end up going to the hospital where he committed the crime, to stop him. Before the police, in fact they do not show up in the hospital or even on the hospitals grounds. Instead they wait outside the gates for Laura, the daughter to go get him. Interesting, no one said this story would be logical did they?

You're then transported to a castle, your father's realm or mind if you prefer. You have some kind of psychic connection with him. And your job is to get through it, finish puzzles and save the day.

That's about as much as I can say without too much spoiling. Which is why I won't tell you why the game is called D it's all explained in the end of the game.

The controls are simple, push forward, move forward sort of thing. Inventory button and an action button are included. Simply put if you need the manual to figure out the controls you should probably not be playing games. At least not while others can see you.

Your character moves slow, one of the slowest I've ever seen in games. The graphics are dated. Back then awesome, now kind of........ Special is the word will use. Puzzles are hard enough if you've never done them before but do not change and if you know them the game is extremely short despite some systems having up to 3 discs.

Another disadvantage to the game is you're on a time limit for some puzzles and there are no saves or pauses. That's right, try not to drink too many fluids and hopefully your system does not freeze or you'll be taking a trip to swear land to visit disc 1. I have tested this out myself by leaving the game running and sure enough. Although I have found a solution for the PSone version, which may work for all of them. When it asks you to switch disks you can take all the time you need, kind of a makeshift pause but it has worked for me up to 20 minutes, while I went to the store.

There can be multiple endings but they kind of stink so even with them this game has absolutely no replayability.

So why do I torture my self by playing this game from time to time like I said its one of my favorites. Its got something about it that draws me back and its one of those things you either like it or you don't.

Alright on with my ratings:

Graphics -- B+
Yes B+, why you ask? Because for the time these graphics where awesome even though now they may seem choppy at best. Designers did not have much to work with back then when creating games.

Sound -- A
The sound is actually not bad, not intrusive or overpowering and blends well. Aside from the occasional scene when the father communicates with Laura saying her name 7000 times before he actually says anything and having to watch and listen to it with no possible hope of skipping it. But it only happens a few times. A

Gameplay -- A+
For me gameplay gets an A+ I enjoy these types of games and with a first play through for anybody else your sure to enjoy the puzzles and uncertainty of what's going to happen. Don't read a walkthrough though or it will probably kill your experience.

Replay Value -- B+
For fans of this game it does have a strange kind of replay value for others, not so much. So this will have to get a B+

Learning Curve -- C+
This get a C+ personally I have never found the game hard to play right from the very first time but I know of some whom have so I would say its mid range, hence the C+
Review Page Hits: 0 today (293 total)
mediahook