Japanese and Nazi Germany forces have taken over a large part of the world and it's time to take it back from them. Compete in 15 levels across Germany, Japan, Russia and the Pacific Ocean in an attempt to stop the Axis powers in their tracks. 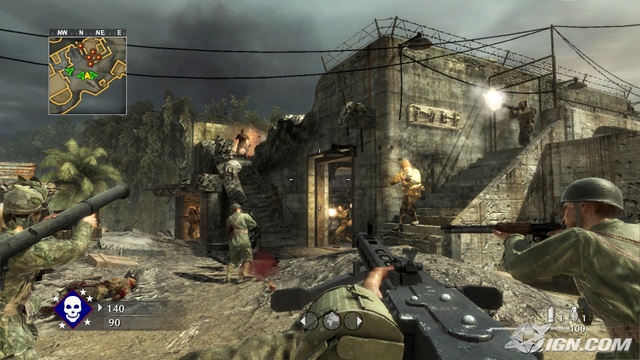 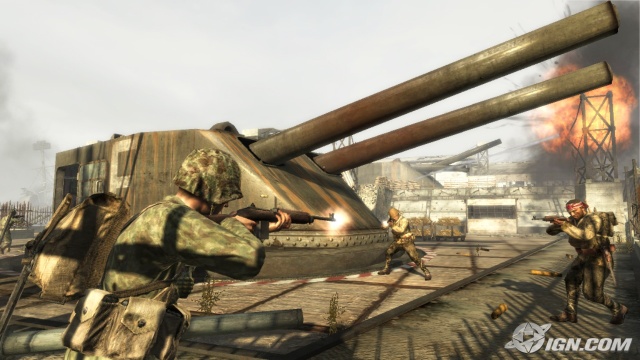 Call of Duty World at War is an excellent FPS game even though many fans think of it as a step backwards from the Modern Warfare series. Although that may be partially true, WaW is a game that can hold its own on the battlefield.

In WaW you will travel to different areas like Japan, Germany, Russia and even the Pacific Ocean (along with many islands in that region) to stop the onslaught of Japanese and German forces from taking over Europe. Each of the 15 levels offer a different setting and the game doesn't start to lose its steam until the last 2 or 3 levels. That's when the gameplay gets a little boring. For the most part you will always be doing something different: in one level you might need to infiltrate an enemy stronghold in sniper mode, in another you are in a plane shooting down enemy supply ships, and in another you will need to go behind enemy lines to assassinate a German general. There's lots of variety in the missions so it takes a long time before the missions get boring, but the game never feels repetitive. The battles are pretty intense, there isn't a mini-battle where you shoot a few enemies and go on to the next area; every area is a fight to the death. The game packs a serious punch and constantly throws action your way.

The weapons may seem outdated from the WWII era, but they are, in every way, very fun to use. The machine guns are great at tearing people to shreds, the sniper rifle is easy to use and the flamethrower throws in a mixture of variety to kill the enemy. Riding around in a tank and shooting at fleeing enemy soldiers and bombing the enemy tanks is also a neat way to play.

Enemy AI is a big issue for this game; they often suffer from stupidity most of the time. Enemies will often stand in the middle of nowhere and not even shoot anybody, or they will often run right by the player and other allied forces just to turn right back around and come your way again. You can even sometimes creep up behind enemies and sit there and they will never notice you. Friendly AI sometimes isn't very smart either; they will allow enemies to run past them only to die when the enemy turns around and kills them. Enemy grenades are a huge pain to deal with in this game. Not only does the enemy seem to never run out, but they also appear to have deadly accuracy in throwing them. Even if the grenade indicator isn't near you, it can still cause you to die; they have amazing radius kills. And with the darker setting it sometimes makes it hard to find the grenades to throw them back.

The Death Cards are a neat addition to the gameplay, however, collecting all 13 of them doesn't give you much incentive to gather them unless you want the achievements. They are cool to collect and very easy to find, but for only a few Gamerpoints they may be a waste of time for many people. They do offer unlockable cheats for co-op mode but that's pretty much it.

The graphics in the game are decent, the environments are extremely accurate and detailed. Even though you're playing in mostly war-torn areas you can see the beauty in the work of the developers and it's easy to see how much work they put into getting the areas right. Whether it be the jungles in Japan, the torn buildings in Russia or all the burning bunkers it's easy to stop and look around as bullets are firing away.

Gunshots and explosions don't offer much as far as the sounds are concerned. The hit detection and rate of fire are pretty accurate, but they don't add any realism to the gaming experience. Grenades and RPG explosions won't catch your eyes as they leave little bits of noise and small bursts of fire. Even the sounds of tank explosions and naval bombardments seem like powerless weapons. The voice acting doesn't seem like it fits in with the game. Characters sometimes tell long and boring stories and will often yell orders over and over until you complete the checkpoint. The voice acting often feels too scripted and uninspiring and becomes apparent that the actors are reading lines rather than truly acting out a scene. These are small issues but are very apparent and take away from the true war experience.

Another great thing about this game is it allows up to 4 players in co-op. Nazi Zombies is a cool new feature to the game. Basically you can play up to 4 players to kill as many zombies as you can and board up the windows to slow down their advancement. Stay alive as long as you can to unlock additional rooms and weapons, but once everybody dies the game is over. Other modes like team deathmatch and capture the flag are all available in WaW. As fun as the campaign was, the online mode is what makes this game shine. It will undoubtedly make you return to the game months from now.

Overall I think this is a great game and an excellent FPS. Don't let the return to WWII fool you, this game has a lot of heart and a lot of intense gameplay.
Review Page Hits: 1 today (240 total)
mediahook