Majin and the Forsaken Kingdom (Xbox 360)

What some may call cliche', I deem a CLASSIC. 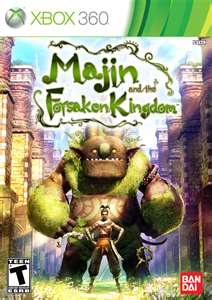 In Majin and the Forsaken Kingdom you control Tepeju and his lovable sidekick, The Guardian. It is a game that has a look and feel similar to that of ICO, Kingdom Hearts, and Prince of Persia, but does a great job setting itself apart from those titles and giving itself its own identity.

Story:
The story, although cliche' at times, is very well polished and thought out. You are Tepeju and after helping free the Guardian, you both set out on a quest to rid the world of "the Darkness". You will be traveling through a vast land consisting of forests, deserts, mines, ships and castles, all so you can purge the world of the darkness and restore it to its natural state. The only complaint I have with the story is that the cutscenes used to tell the story leave a little to be desired.
8/10

Graphics:
The graphics in Majin are extremely polished and look incredible. As stated above in the story, you will be visiting many different locations and all look and feel different. At times evern I caught myself awing at the vast detail the designers put into this game. Definitely a strong point for the game.
9.5/10

Gameplay:
Ah, the ever important gameplay. For those of you who are fans of Kingdom Hearts, you will love this combat system. Your weapons include a sword that resembles a keyblade, rocks, even a giant man-bear-pig that totally kicks some tail. As you progress through the game you unlock different abilities for the Majin. Along with your awesome hack and slashing abilities, throw in your Majin blowing gale force wind abilities and you get some incredible combos. Being thrown 30 feet in the air by the Majin while doing some aerial acrobatics and finally unleashing a devastating downward sword thrust is one of the most satisfying things I have done in a video game in quite some time. Also, the game features some unique RPG aspects. Not only do you level up, but by performing combos with the Majin your team work levels up. You also collect costumes throughout the game that not only change Tepeju's abilities but change your look as well. I never got tired of the combat system and haven't had this much fun hacking and slashing since Kingdom Hearts.
9.5/10

Sound:
The biggest issue with the game is the sound. Voice acting is actually pretty good...and then there is the Majin. Don't get me wrong, by the end of the game I was completely attached to the big fella, but I can see the issues people have with it. Personally, I feel the voice fits perfectly and I can't picture any other voice or dialog fitting the character. IGN was quoted saying "The Guardian is like Barney who didn't make it out of grade school." You will probably either love the voice acting, or hate it. Also, the soundtrack is not very diverse at all. The only thing I got tired of in the game was definitely the music. All the tracks sounded the same to me.
7/10

Overall Rating and Conclusion:
Let me start my closing by saying this game had me engrossed from start to finish. The puzzles never felt too similar and I never got tired of the battles. It is extremely well paced. You never get too much puzzle or too much action. The story has a great plot, the graphics are incredible, and as I stated previously, it has amazing gameplay. The only thing I feel is lacking in the game is the sound. A weak soundtrack and questionable voice acting are the downside, BUT I can easily overlook this as this is one of the better games I have played in awhile. I highly recommend this game to anyone who enjoys action/adventure games and it ranks as one of the best action/adventure titles on the 360 in my opinion (Sorry don't have a PS3 so I don't know how it ranks there).