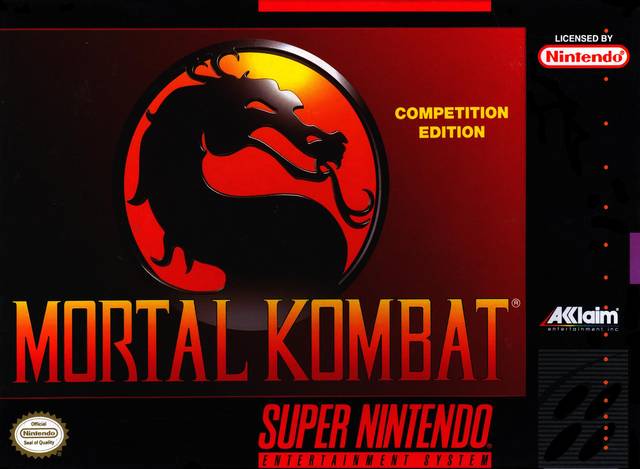 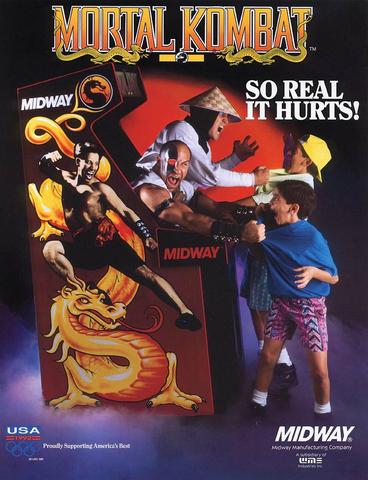 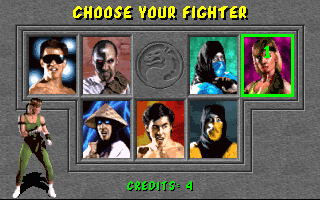 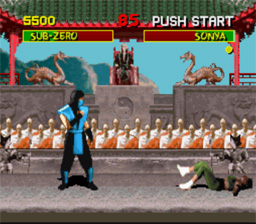 Overall: The gameplay is pretty much the same as the arcade version of this fantastic game. All the characters are there and it seems like all the options are there as well. The difficulty option is pretty helpful since the AI in this game can be pretty cheap at times. But that's not really too bad because you can always just change your strategy and continue to win matches. It's not like you will have to play through too many matches anyway. There are only seven characters playable in the game, unless you use a gameshark, which can let you use the bosses as well, but using them is hard, so go ahead if you really want to. There is only two things separating the arcade and port versions. This version has a lower quality of graphics and well...there's no blood. It's just sweat. You need a gameshark to get the sweat to look like blood. Also worth mentioning is that the fatalities are a bit different, which by that, I mean less violent.

Gameplay: It's Mortal Kombat on the Super Nintendo. That means a gamepad instead of a joystick and push buttons. Since you're using a d-pad, the movement will feel very tight. I usually like when the controls are tight,, but this is just taking it way too far. The blocking also feels a bit too tight, but it feels that way in the Arcade, too, so I can't complain much about that. The difficulty is a bit lower, which helps and all of the characters are still there. The attacks feel like they aren't tight enough as well. In other words, you have some sloppy controls to use if you want to win. Basically, the main objective is to be able to beat your opponent like in any other fighting game. Seven characters seems like a low number, but it was good at the time and these are some of the best characters in Mortal Kombat games in my opinion. When you win a match, you get to use a fatality. That means messing up your opponent even worse and getting more points. Yes, you actually have a score. Now we're talking! And who doesn't love getting a high score?

Graphics: I won't say too much here because I said a lot about it already. They aren't as good as the Arcade version, but they're still great. They beat the Genesis version by a long shot. Only one thing is missing, and that's the nice red stuff that spews out of people when they are hit in a normal Mortal Kombat game. Blood. Instead, you see sweat. Do people sweat when people perform fatalities on them? I didn't think so either.

Replay Value: The game won't be easy to beat, but it sure will be worth it once you do. It'll take a while, but it will happen if you keep trying. And after that, you can just bump up the difficulty or play with friends. Some might say that other versions were better for playing with friends, but I still believe that this one is the best. It sure feels like it's the most balanced out of all of the Mortal Kombats, save for UMK3, but that one isn't very fun on its own in my opinion.

Learning Curve: The learning curve is a bit poor for a game. I knew that games were hard back in the day, but were they ever cheap? Not the fighting games, not that there were really any other games than Street Fighter II and a few other things. With cheap AI and movement that is just too tight, the learning curve just took a big hit. The game is hard to learn because of how the AI just beats on you with punches while you need the special moves just to survive unless you are playing on easy.

My Rating: I gave the game an A- due to the lack of blood and the movement being a bit too tight. The learning curve is also poor. It's hard to get good at the game. The game doesn't even bother to tell you any of the special moves and in order to figure them out, you need the manual or the internet. The game really should give you a moves list. Since this is not the case, I have provided a link to the special moves. Enjoy.
Review Page Hits: 0 today (1,069 total)
mediahook