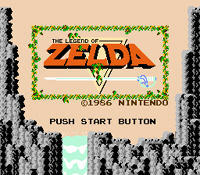 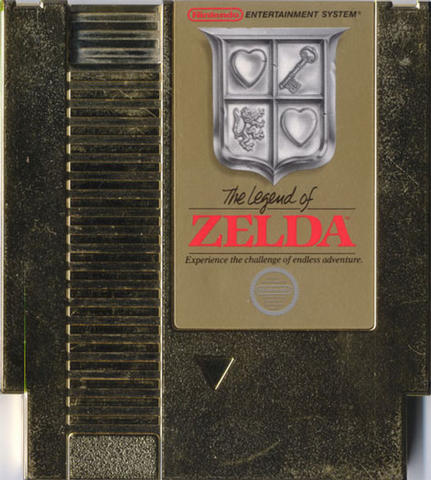 Now that I have your attention, let's get to work.

In the Legend of Zelda, you play as Link, the heroic (and possibly unfortunate) soul who is destined to save Zelda, over and over and over again. Zelda, who has a knack for getting into trouble, is the princess of Hyrule. Ganon has kidnapped her, along with the triforce and has threatened to reign tyrannously over Hyrule. When you start the game Link has nothing but the clothes and the determination in his eye.

Graphics-
The graphics are good (for an NES game). The backgrounds, although simplistic, get the point across and provide a certain amount of immersion. The character design is very good, typical elf style fantasy wardrobe. The colors suit the characters and the part. The monster design although nothing fantastic, are leaps and bounds better then the competitions (coughDeadlyTowerscough).

Sound-
The Legend of Zelda has a GREAT soundtrack; the music is atmospheric, which adds greatly to the game. Some of the sounds effects are frustratingly common but most are acceptable.

Gameplay-
The controls in this game are frustrating to say the least. You can be walking along and all of a sudden find yourself (Link) going in an odd direction. You are not able to move diagonally, which to me is almost an imperative feature in an action/RPG, especially top down ones. If you are standing in a doorway Link can't use his sword which also causes problems at times. Also, every once in a while Link will get caught along the wall because of an odd spot in the collision detection. Lastly Link's sword doesn't respond as quickly as one would like.

The dungeons are well designed. They provide a good amount of exploring, yet are mostly simple enough that with a little work you can figure it out. In each dungeon there is a treasure, a boss, several keys, one being the master key, and a compass, which shows where the boss is. This formula has carried over into each Zelda after, which I feel is a good thing.

Link's life force is represented in hearts, which can be increased by defeating the bosses and finding the locations of the hidden heart containers. Finding these containers, along with hidden caves, stairs, and other items, make exploring the over world fun.

Lastly, the learning curve of The Legend of Zelda, is pretty gentle. The first three dungeons are rather easy which allows you to get used to the controls and adjust to the game play. After those three dungeons though, the game does get progressively harder. The replay value is rather good as well, each time you play through the game it can be done a little differently. As an added bonus when you complete the game you can play through it again with different, more dificult dungeons, for those of you who didn't get enough the first time.

Overall The Legend of Zelda is a successful star to a genre and a series. I recommended it to anyone who is a fan of action games, RPG's, Nintendo or just games in general.