A classic casual puzzle game from the 8-bit era. 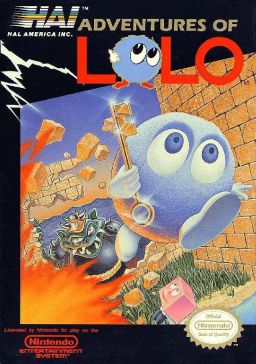 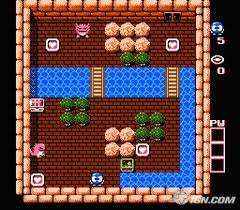 Adventures of Lolo is a puzzle game at heart starring an endearing blue ball named Lolo. The story goes that Princess Lala has been captured by King Egger and you have to save her.

The gameplay starts out simple and grows increasingly complex. The game is broken into levels and every five levels constitutes a "floor" of the King's castle, with the King himself waiting for you at the top. The puzzles themselves grow in difficulty and require logic and finesse to solve, not brute force.

Each level is a puzzle with the goal of collecting all of the hearts to open a chest containing a key. Simple enough until you find levels populated with dangerous enemies, including snakes, medusae, and more! Enemies will try to trap Lolo in a corner (forcing you to give up and start the level over) or kill you with a blast of energy. You can occasionally attack the enemies and turn them into eggs which can be pushed around the level to help solve the puzzle or pushed into water to float around from one part of the map to another. One nice feature of the game is the power ups scattered through some levels, such as bridges to cross water or hammers to break bricks, which serve as crucial items in beating the level in which they are found.

The game itself includes a password system, returning you to the floor and level you left off when you died (and you will die trying to solve some of the floors).

The graphics are nice enough for the 8-bit era. You can (mostly) tell what the enemies are and the stage designs are clear and attractive to play.

The sounds and music is surprisingly catchy! You'll be humming along without even realizing it. Better than the average NES game for sure.

The game's biggest fault lies in its replayability. Being a defined puzzle game, once you solve the all puzzles there is little or no reason to go back and play the game again.
Review Page Hits: 2 today (248 total)
mediahook