Liberation is a nice entry into the Assassin's Creed Family... even if you don't know how it fits 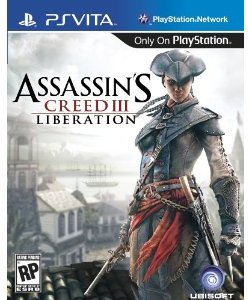 Assassin's Creed III: Liberation is the first AC on the Vita and one of very few big budget releases that aren't complete remakes or re-releases of something that you've already played. Instead, Liberation is a game that stands along side its bigger console brethren, Assassin's Creed III. Don't make the mistake thinking that this game is something of a console port. It's definitely not, but too don't make the mistake of jumping into this thinking that you were going to further Desmond story either. This play's like Assassin's Creed, looks like Assassin's Creed, but how in the hell does it tie into the overall story... if that's what your looking for don't look to me for answers.

Liberation follows the story of Avaline, a young Assassin trying to figure out who "The Company Man" is that is keeping the slaves, well enslaved. That's about the extent that I found out about why the female huntress was doing what she was doing. The problem with it all is, Liberation has a solid story full of the twists and turns that you would expect from an Assassin's Creed game; but that is where it stops. We have been following a person and his story through the Assassin's Creed games up to this point, Desmond. Him, the Animus, there is nothing that really wraps this game into the Assassin's Creed Universe. That's because Avaline is obviously a name you have never heard synonymous with Assassin's Creed and that is because this is her first rendezvous within the world of Order and the Templars. It's a fleshed out story that doesn't leave out the elements of the story for the game directly at hand, only that of how it truly links into the universe of Desmond. Don't let that scare you away though, there is far worse things that could that you could do then giving this game a play through. There is one encounter that will make sense if you've played the big brother version of the game, but I'll leave that to you to find. It's kind of cool when you find that connection, because you see that this runs side by side with the heavy hitting AAA title and how they connect with the Assassin's but the greater good, again, has no representation.

The gameplay of the game does a nice job of feeling like a Assassin's Creed game and does a great job of looking like it too. The game is robust with people wondering the streets, Blue coats at every corner, and treetops galore to hop from branch to branch on and it should be played. It is a ton of fun. Sure, the controls can get a little difficult from time to time and can be a bit frustrating, but don't let that stop you either because for the most part Liberation feels just as it should and really... even the console versions don't always want to handle the way they should. The game has all the necessary buttons and joysticks (thank goodness) to make this a very enjoyable experience on the Vita. It also doesn't ever make you truly feel like the touch screen controls or back touch pad were integrated and forced. They don't even have to be used other than once and at that point in the game, it works well and makes sense. It's nice to see because to this point developers have made this sort of thing something they felt as though they "had" to put into their games; but for players, we don't care and Ubisoft recognized that and did a nice job.

The lasting appeal of Liberation will lie on whether or not you have a true interest in multiplayer or are a perfectionist. So in other words, there is a decent amount of content here to keep you busy. If your into the multiplayer, and love the console version thinking sweet I can play on my handheld too, well sorry don't mean to be the bearer of bad news but you can't. Instead Assassin's Creed III: Liberation is a strategy game that works similar to the ship mini-game within the campaign that you can do more with to earn money to buy costumes and such. It's a strange decision by Ubisoft and feels like a slap on addition at the last moment, but hey Multiplayer on Playstation's portable units haven't really been well received by the masses anyways so why should Ubisoft spend more on developing something that only receives minimal play. If you love to be a perfectionist on the other hand, there is a lot of things to do in Liberation. There are your typical side missions, or timers to beat, but there is also a business to run via the ships as discussed earlier that can earn you some extra dough. There are costumes to unlock, there are weapons to buy, and of course trophies to get so you can make of the game what you prefer. In the end, if you want to navigate around the world and see what it has to offer, you can, or you can make it as linear as you choose to. As an aside: A word to the wise, as you complete the game, kill the Citizen E's that show up around the game. If you skip one as they come about not only do you miss a little re-wind of the story and little tidbit more, but you have to kill them anyways at the end.

Assassin's Creed III: Liberation is a sprawling single player, with a weird multiplayer attached to it, but in the end is a great game to play. Sure it has it's problems and fair share of frustrating moments, but the story does flow nicely and is interesting enough to play the whole way through...even though the higher lineage is never acknowledged. Assassin's Creed III: Liberation is a nice addition to the family and a ton of fun to play, even nicer that you can take it with you on the go.
Review Page Hits: 3 today (441 total)
mediahook