A quantum leap in improvement over the first game, Assassin's Creed 2 addresses the majority of the issues with the first game and delivers a stellar experience. 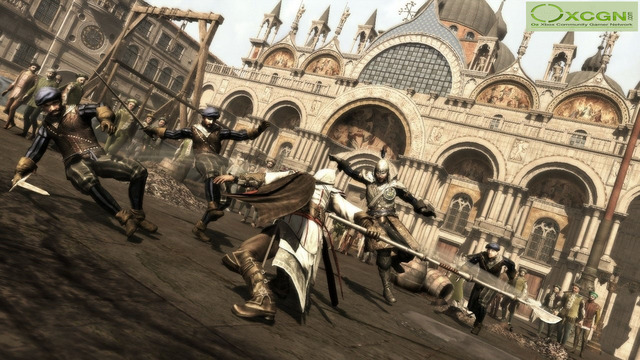 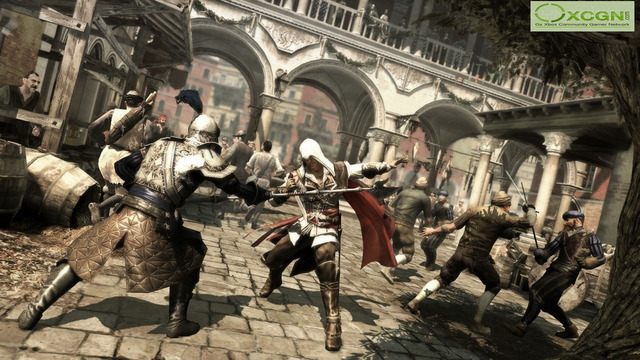 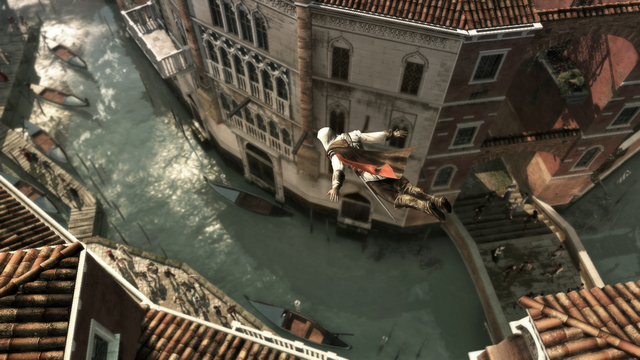 Unlike many people I actually enjoyed the first Assassin's Creed game. Granted, I too thought it was horribly repetitive, but I enjoyed the technical aspects of the game... the climbing, the fighting, etc. Still, it wasn't good enough to warrant buying the sequel unless I knew they'd made it more interesting. I heard it was better so I gave it a spin, a good move for sure.

Let's start out by addressing a few of the issues that the first Assassin's Creed has and how the sequel fixed them.

-Character Development: In the first game there is literally no back-story for Altair. You start off on a mission gone awry and work from there. With Ezio in the second game you start the story BEFORE you're an assassin. You learn the overall behavior of your character, his motivation, etc. Then it eases you into the position of assassin.

-Emotion: In the first game Altair has roughly the emotional level of a rock. He gets a mission, he follows his orders, and he never really questions or feels anything. Ezio on the other hand has a bit of a bad boy mentality. He fancies himself a ladies man (and acts upon it); he makes mistakes when he gets angry, he woos more ladies, etc. He seems more human than Altair the robot did.

-Economy: In the first game you go through the game and you get a new item what, once every mission (for a grand total of 8)? In the second game there is an economy. Instead of relying on missions to buy new gear you can buy it whenever you have the cash to do so (although better tiers of gear aren't unlocked until you progress through the story). And there are plenty of ways to earn money. Pickpocket people, loot corpses, carry mail, assassinate targets, help wives get even with their cheating husbands, all of which are relatively fun to play. Also, you can spend your money on hired help such as courtesans (who use their wiles to distract guards) or thieves (who start brawls to distract guards). It again gives a much more realistic feeling to the game.

-Repetitive missions: The biggest issue in the first game is nowhere to be found here, although maybe that's just me. In the first game you have 3 types of missions... pickpocket, interrogate, or eavesdrop. That's it. Rinse and repeat. In this game it follows more of a story where no two missions are identical. Whether it be releasing prisoners to kill certain guards to allow your allies to set themselves up in certain positions or even as a defensive escort. There is lots of variation and lots of fun.

-Ridiculous collection of items: Flags...the first game had lots of flags. If I recall it was something along the line of 440 flags. I think I collected a grand total of maybe 60 in the first game. In this game there are only 100 feathers to collect and each area tells you how many of said feathers for each area you've collected. I didn't get all the feathers but I didn't find it nearly as distracting as the flags.

The game isn't without its faults. Countering is still the most effective way to kill someone. The hidden blade counters are overpowered, but overall combat is a little more balanced.

The controls still aren't perfect. There were a few times when I'd try to jump a certain direction and Ezio would jump a different direction (usually off the top of a building thus killing me).

Also, there are some graphical/textural errors. I glitched through the floor at one point and got stuck.

But the few bugs can't detract from the fun of the game. Overall it's a great game and rather lengthy, I want to say that my playthrough (I didn't find all of the feathers or glyphs) took maybe 18 hours? I did a lot of exploring though and it's a good bit of fun to explore in this game, unlike the previous.
Review Page Hits: 3 today (283 total)
mediahook