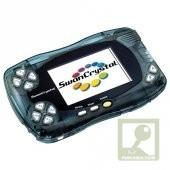 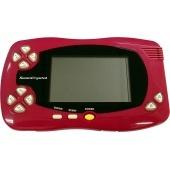 The SwanCrystal from Bandai was released in November of 2002 and is the third iteration in the series. Following the original black and white Wonderswan, the SwanCrystal is a tweaked version of the Wonderswan Color.


Hardware
The SwanCrystal improves on the Wonderswan Color by having a TFT non back/frontlit screen instead of a FSTN LCD screen. This allows the screen to produce sharper images. The SwanCrystal is also a little smaller. The Swan Crystal was only released in Japan and has the following specs:

The system comes in a variety of colors ranging from solid colors like Red Wine to transparent colors like Skeleton Black. There was even a limited edition Final Fantasy version that was released in a special bundle with the SwanCrystal release of the original Final Fantasy. Outside of the color the design is very sleek. It's thin and light weight, hell I'll even use the term sexy. It even features a locking mechanism for the battery cover. In hand the system feels nice and after playing for a long period of time, at least for me, there is no cramping.

The speaker is positioned in the top right corner of the system when held horizontally. The SwanCrystal is capable of both Mono and Stereo but if I had one complaint about the system it would be its volume. The sound itself is very nice and the speaker does a great job boasting clear sound and music but instead of a dial to control volume there is a button located next to the start and power buttons below the screen. There are four levels of volume including mute however with only four levels there's no real in-between. It's either too loud or too soft.

One unique feature of the SwanCrystal is its' ability to play games horizontally or vertically (game specific). This leads to an interesting button layout. I've already mentioned the placement of the Start, Sound and Power buttons. When horizontal, the A and B buttons are located at the bottom right of the system, positioned like the Game Boy's (B bottom first). On the other side of the system is the unique part, the X and Y buttons are broken up into four separate buttons each; X in the lower left, Y in the upper left. When playing a game horizontally the Y buttons act as secondary buttons (items, commands etc) and the X button serves as a D-Pad. When the system is being played horizontally the Y buttons act as the D-Pad and the X buttons take over for the A and B buttons. This works surprisingly well.


Accessories
On the right side of the system (when horizontal) there is a connection port that is used for various accessories and attachments:


Games
The SwanCrystal has the ability to act like a Game Boy Advance in that it can play all previous Wonderswan and Wonderswan Color games as well as SwanCrystal games. However all games are in Japanese with the exception of Digimon: Veedramon Version, which is the only SwanCrystal game completely in English. The SwanCrystal is most notable for its amount of great RPGs and anime inspired games, but there are many great games that explore and exploit the color and uniqueness of the SwanCrystal. Here are a few of the best: