Now you can Bust-A-Move in your Pocket. 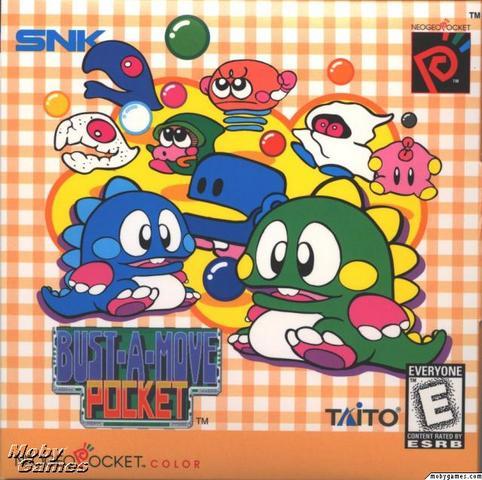 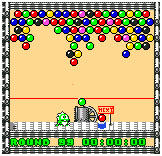 Bust-A-Move Pocket is the classic iteration of the original release. The object of this puzzle game is to make the colored spheres disappear by connecting three of the same color together. Once the screen is clear, you win.

Gameplay
Nothing has changed in this release from any other previous release in the series. There are tentatively four game modes. Puzzle is where you try and clear a predetermined puzzle. Vs-CPU is Player One against the computer. Survivor is a continuation of random puzzles until you fail at one (like a fighting game). Finally, Player vs. Player is your standard duel using the link cable. What's frustrating is, while there are eight different characters, you are always the main character Bob. What's nice though is that when you play against the computer you get to pick which character the computer is.

Graphics and Sound
The graphics are simple and uninteresting to be blunt. However, they serve their purpose well in separating the spheres with different colors, which is what the game is all about. The character animation is nice and helps bring you into the game. When you're in trouble Bob will panic or cry, and when you are doing well he will jump, dance, and smile. The sound is basic and the theme gets a little repetitive as well.

Replay
If you are a fan of puzzle games, no doubt you come back time and again to play Bust-A-Move Pocket. But even if you aren't it's a good game to pick up to kill some time and have fun while you're doing it.

There are many, many puzzle games out for the Neo Geo Pocket Color. This is a solid game in the Bust-A-Move franchise but unless you're a big fan of the series, a puzzle fan, or a collector think twice before taking the plunge. Overall, there are more engaging puzzles games for the NGPC.
Review Page Hits: 0 today (401 total)
mediahook