It like what my QM (Quater Master) use to say (About Parade), "bewbs out, ass in and give them your best" Just like this game then, but no parade! 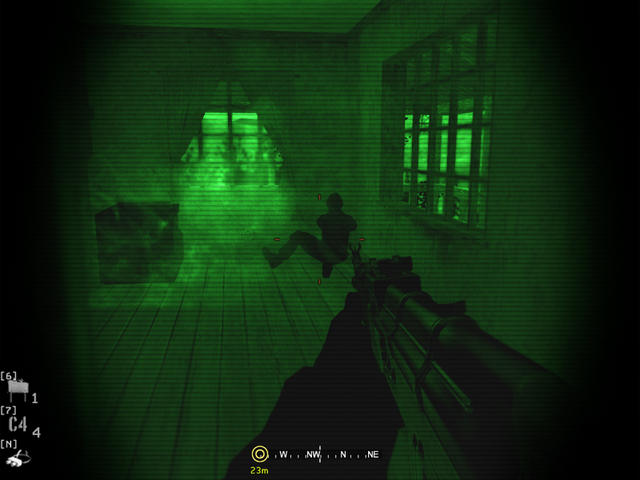 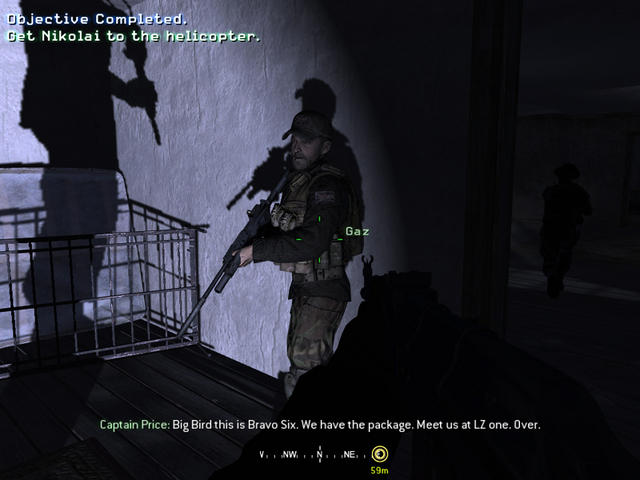 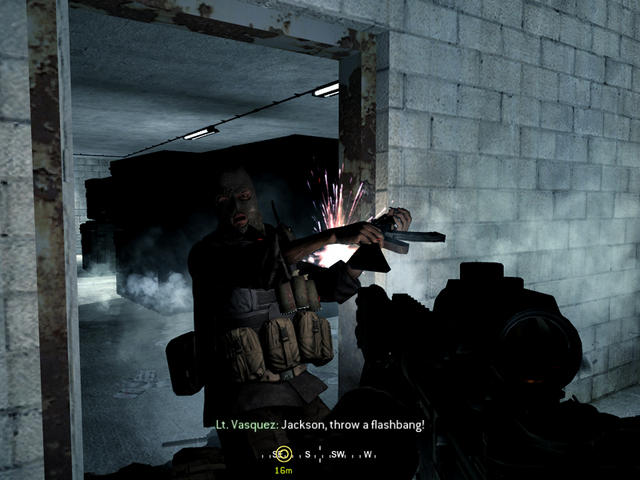 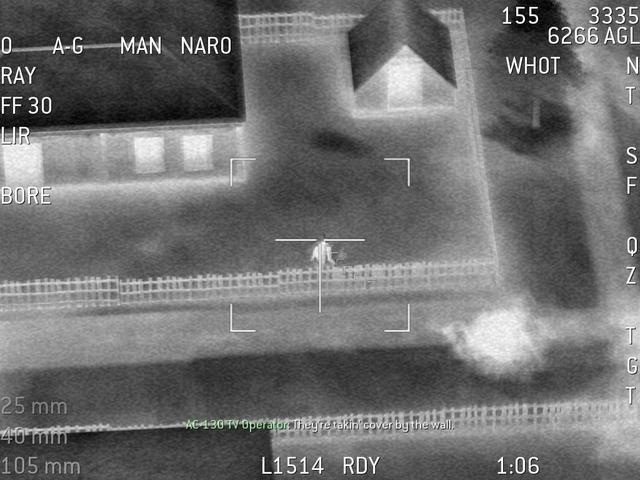 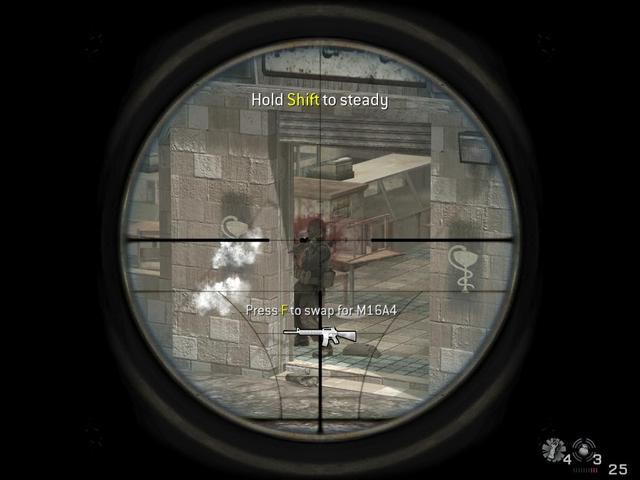 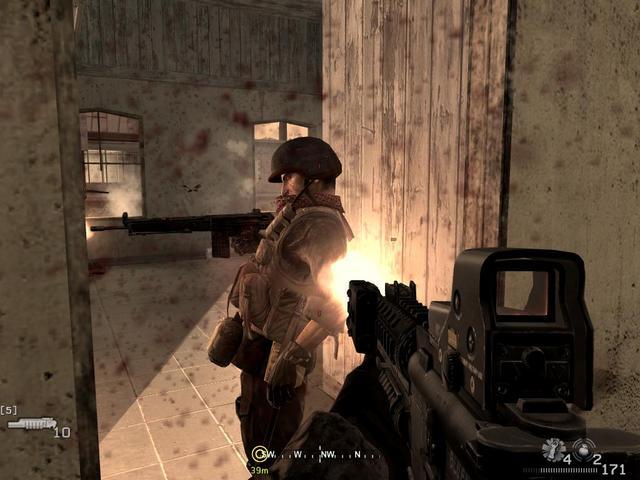 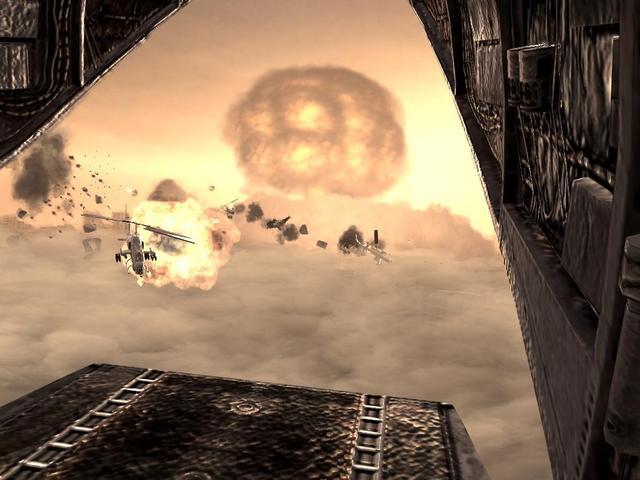 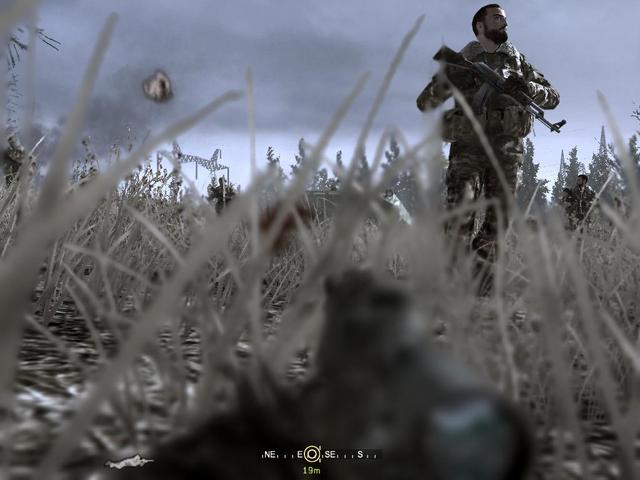 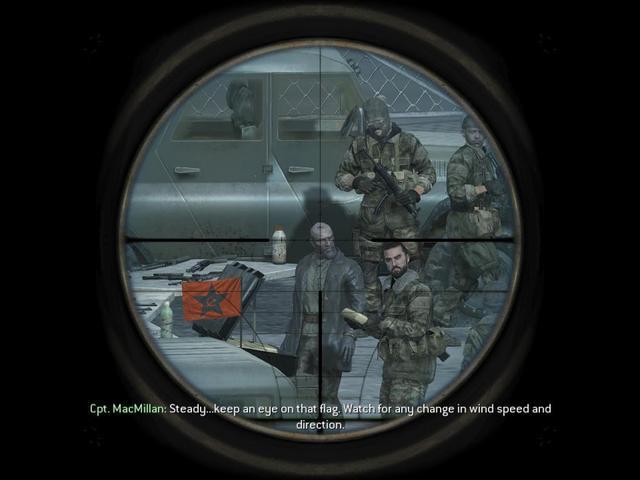 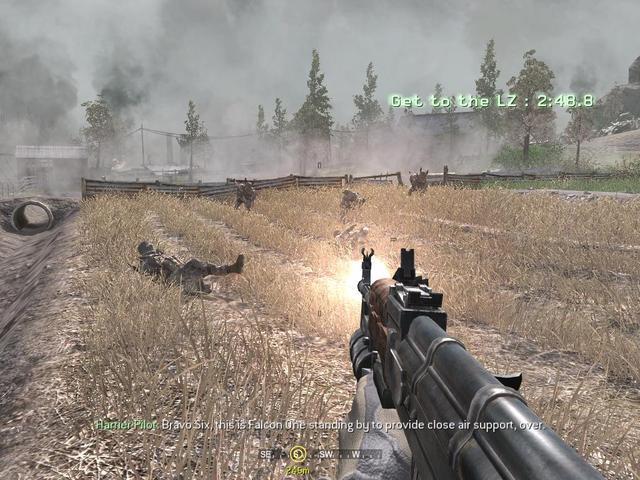 If there were one statement that sums up this game, it would be the following: "Never before has a game annoyed me, and yet thrilled, excited and entertained me so much!"

The setting and storyline of the game is fictional. While not a major draw to the screen, it is good. However major credit goes to the fact that the Call of Duty series have steered clear of World War II scenarios. This makes for a fantastic change, and I hope more developers follow suit.

The main storyline follows an evil dictator, Zakhaev, who is hell-bent, on avenging his mother Russia. But to be honest most of the storyline will be missed. The stories you will hold dear are the ones of your squad. You are the new member of an elite SAS squad, and weirdly named Soap. Starting in a small squad of family members, you have your tough father figure, Captain Price, your loveable uncle, Gaz.

During the middle part of the game you will play as an American soldier, with the more suitable name of Jackson. However these missions don't have much of a story to them, but are action packed and great fun.

You will feel a part of your squad; they are your friends, comrades and even your brothers. On another note, later on within the story, you'll be joined by a cocky American only for a short while. But even still you find yourself developing a fondness for SSgt Griggs. This is one of the rare games, were the characters will reach out to you, and even rarer to be seen in FPS. If you don't believe me, you have to finish the game to find out how much they will mean to you!

However The AI is one of the most annoying factors of the game. The friendly AI is highly clumsy and has some serious flaws. But I won't spoil it, because if you don't notice it, it will glare out, if I tell you. I want to, but can't, otherwise it will change your gameplay and lessen your experience of the game. Funnily enough, the Enemy AI is not as bad, but that has more to do with their role and nature within the game.

Another annoying thing is the checkpoint save system. I'd heard that this game was a little too easy on the lower difficulty levels, and one of the reasons why I when straight for hardened difficulty. At this level the game can sometimes be a real struggle, and very annoying at times. I have been through a whole bottle of screen Cleanser, just wiping the spit from it, as I roar at the screen. Of course dying is always annoying, but the really annoying thing is the repetitive tasks involved.

Take for example, I get to a checkpoint save, haven't reloaded or anything. This means each time you die, you are constantly faced with these repetitive tasks. On some occasions, when you are surrounded by enemies, you will die a lot. These are the parts where the fight becomes tiresome very quickly. Woe-be-tide you if you have to pick up another weapon or grenades because you are running low. I guess there is a moral to this story, however you are not aware of an upcoming checkpoint save until it is too late.


Lastly, Grenades! I can see Zakhaev now, as he nervously takes his tax forms to his accountant.
"Ah lets see Mr Zakhaev, $20,000 on AKm's, $50,000 on 5.56 rounds ... but what is this miscellaneous for $450,000?"
"Err... that is Grenades!" And that is right, never ever have I seen an army use so many of these things. While it makes it more interesting, I suspect the reason they over use them is not to make it harder. But because you are able to pick up grenades and throw them back, so to enable you to use this function, they have to be thrown at you.

An interesting fact about computer games is that grenades go off faster than in real life. Normally they have a 5 second fuse timer, while in a game it is 3. This means throwing a grenade back in the game means an explosion in your face. So personally I don't bother, if you have any sense, you'll do what anybody else would do, run away, duck and cover. I know it's only a game, but there is no need to be a hero!

If I had to pick one mission that demonstrates nearly all the flaws in this game, it would be the Downed Cobra Pilot Mission. Well Mission might be stretching it, but it is supposed to be a mini replica of "Black Hawk Down". Wining this level is not really about strategy with your squad mates, as they are more of a hindrance. The Idea is a short race to the downed pilot and get her safely back to the Chinook, all the while the enemy is fast approaching. There are two ways to win this, and both involve the loopholes in the AI. (I'll let you discover when you play this game.)

Everything else is fantastic, beautiful game, wonderful quality of graphics, excellent use of suspense, action and thrills galore. Just to say it, but the weapons are fantastic, apart from being very detailed, they feel real comfortable and fantastic to use.

It's funny, at times, after coming off the computer I still had the sensation of holding a rifle. You may think I am exaggerating and maybe just a little. But honestly it was that good. I have always had a pet peeve about game that decreases the accuracy of the guns sights. Especially sniper rifles, where the sights drift all over the screen. While you are still able to miss, at least you can't blame anyone beside yourself.

The next great thing about this is the variation of levels. While the majority, sees you as a foot soldier dashing through levels. Every so often it is broken up with a side mission. One of the first is being a gunner on the mighty AC-130 Gunship, which is a Hercules type plane with various deadly armaments on it. (If you've seen Transformers, it's that plane that destroys the Scorpion!)

It's like being in those Cop TV programs, where you are the helicopter at night, only with guns! Using the black and white Night vision, graphically very simple and yet has so much emphasis. And you can but help feel sorry for the bad guys as you fire away, all the while tucked up safely in the tank of the skies. But such is the nature of war.

Then there are other missions which break up the FPS. The sniper level is my favourite. I would have no problem classing it as the best part, but that's because I enjoy these missions ever since Sam Fisher. While you might wonder how a sniper can be different from the main shooter missions. This one gives you choices, it is acceptable to leave enemies and let them live. And while normally you expect the enemy to fire back, in these missions, if they do, things are going horribly wrong!

Actually I do have one small grumble! With this game there is nothing that I can honestly say that I hate; except the dogs! On some levels you will encounter German Sheppard's; they are the most vicious little creatures I have ever seen. I truly fear these things, and will tear through your throat faster than a werewolf. But if you're quick enough, you can break their necks, but I mean quick!

This is a fantastic game, and the ending, is just fantastic! Forget any Gamer Awards, this deserves an Oscar!
"Did I mention fantastic? ...Oh I did, well why are you still reading this review?"
James