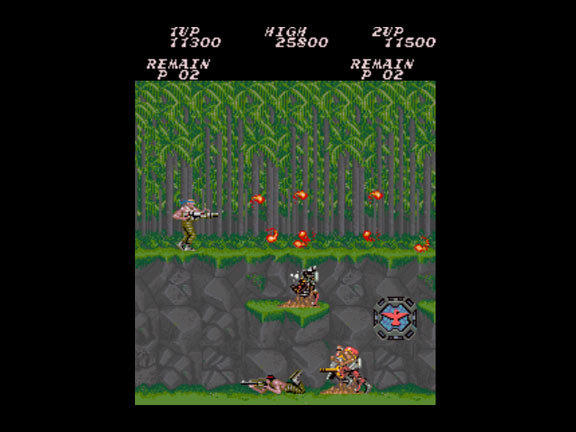 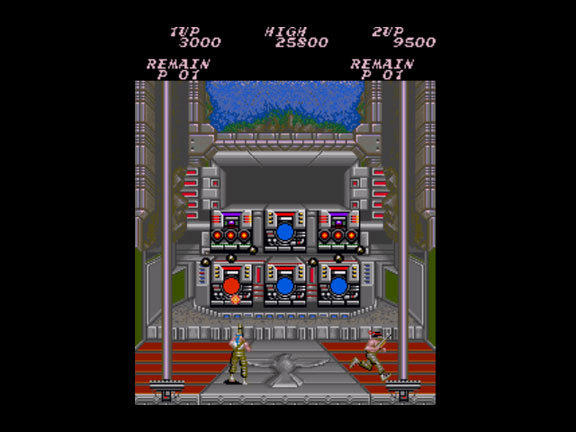 Contra returns! Back from the coin-op graveyard, the Xbox 360 has brought us a cult classic. Anyone that grew up in the early nineties has probably seen Contra, either on the NES or in the arcades.

As you remember, you play as two characters in a quest to save the earth from an alien horde. Xbox Live Arcade is really interested in keeping with originality while giving a few perks to catch newer eyes. In the Xbox Live Arcade version you have the original version of the classic game with the added ability of adjusting the graphics. In the options menu, you can adjust the graphics from original to enhanced. When you select enhanced the colors, explosions and level textures have been touched up quite a bit. Classic players will notice that the changes are a little more than subtle.

A lot of people may be confused when they play the game because they are expecting the NES version of the game... but you have to realize that Xbox does not have rights to many of the original NES game titles. This is the original arcade version of the game and it is mimicked to a T. Re-playing this for the first time in over ten years really opened my eyes to some things I missed in the past. The game is extremely easy compared to the NES version. Multiplayer is a lot easier too because you rarely have to worry about the screen out-running your partner.

One of the negatives I witnessed is the screen size. When you have a bigger screen, the size of the game is quite small. It wouldn't be that big of an issue but there is no back splash to counteract the blank space. Also, under the enhanced graphics mode, the new colors sometimes make it hard to see particular bullets. Not only that, but if you jump above the top of the screen you are unable to shoot! This got me killed numerous times.

The sound and gameplay stay true to the classic version. Sound has been re-done a little, but if you don't have a great ear you won't notice it much. Gameplay is still the classic 2D side-scrolling shoot-em up! Any classic fan will enjoy to pop this in and play it... for a little while because it is short (and easy).

This game is definitely worth the five dollars it costs on the X-box live marketplace. You get to revisit a timeless classic and use leaderboards or multiplayer to spruce it up if you become bored. This game is good for about two hours (tops) of gameplay. Don't turn your back on this title just because it isn't an NES original (you little fanboy).
Review Page Hits: 0 today (570 total)
mediahook