Another Zelda-esque action/rpg... with a little Pokemon thrown in? 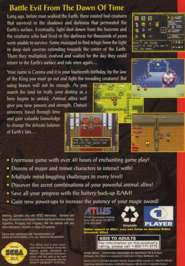 Crusader of Centy is an action/RPG for the Sega Genesis published in 1994. It was another in a long line of games that seemed to be trying to claim some of The Legend of Zelda's fame.

You start out the game as a young boy on his birthday getting what every 14-year-old boy wants, a sword. And with that sword comes a responsibility, becoming a hero. Basically from there you begin your training. As you go along, you quickly realize that none of the NPC's in the game are very helpful. A few times, they give you vague hints on what to do, but more or less, you are on your own.

Game play is pretty simple -- you swing a sword, you throw a sword, you jump, and lastly, you have animal companions. Using these methods, you solve various Zelda-like puzzles (you know, pushing blocks, hitting switches. etc.) and of course, fight off evil bosses. What makes the game more interesting though, are the animal companions you have. As you progress through the game, you meet animals that want to join you for one reason or another. Each animal gives an ability of some sort to your character. A few of the abilities are common stuff like fire or ice swords, but there are some very interesting ones like a sword that ricochets. You can have two animals "equipped" at once and, depending on which combination you use, you get an additional ability.

The graphics in Crusader of Centy are pretty standard looking for the 16-bit era, all sprites and 2-D backgrounds. The backgrounds themselves are nice but nothing wonderful and the characters themselves don't really have much detail. The sound is pleasant; it was catchy, but not distracting, and added a little feeling to the game.

Finally, the story was definately lacking. What little bit was there felt VERY much like Terranigma, but not nearly as good. It had a few unexpected twists but these were minor and even brought a little annoyance at one particular point.

Overall the game is a worth try, it only took about 4 - 5 hours for me to finish it so it wouldn't consume much of your time. The animals and the puzzles in this game make it worth it, especially if you are a fan of the genre.