A great game that offers more content than most people realize 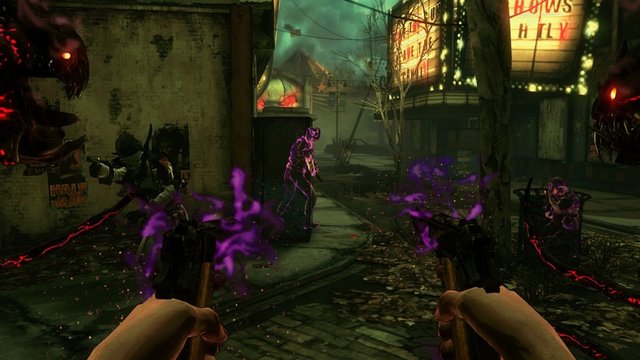 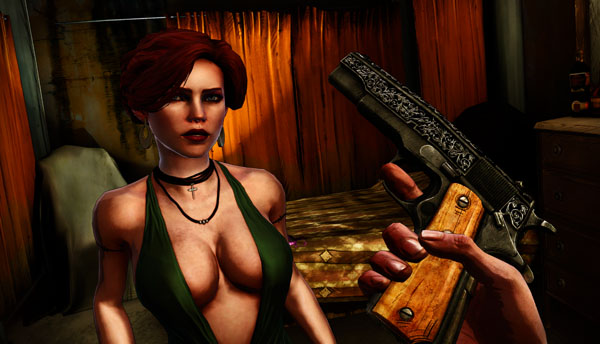 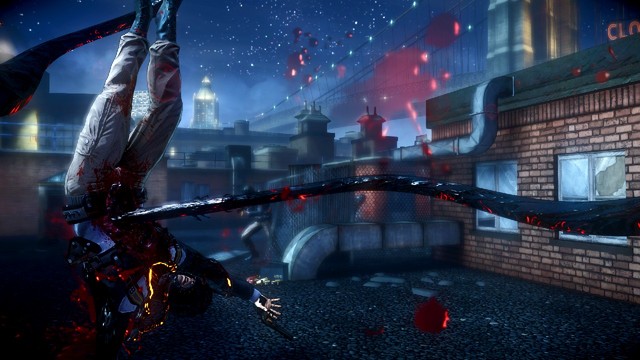 Let me start by saying this game is getting a really bad rap for its length. I've read in numerous places that people have been finishing the game in under five hours. While I won't sit here and say they're lying, if that is true then they are missing a great deal of what this game has to offer. I've read three different reviews and none of them have adequately explained how this game lives up to the $60 price tag that most people, the uninformed people, insist is ridiculous. So, to make this easily digestible, I'm going to split this up into sections.

The game plays very smoothly. The controls are precise, responsive, and the "quad-wielding" gameplay works pretty well. You use the left and right trigger to shoot the guns you have in the corresponding hands and the left and right bumpers to control the corresponding darkness tentacles. The left tentacle is used for grabbing things, whether it's a gun a few feet away, a throwable weapon, or a person. When you have hold of a person and you've unlocked the different executions, you can either kill the person by hitting A, B, X, or Y. There are some seriously gruesome executions, but I'll get to those later. You can also hit the left bumper again to throw the enemy. The right bumper performs a slash attack. In conjunction with the right thumb stick, you can perform a vertical or horizontal slash attack that's used for destroying obstacles, cutting the power in circuit breakers and knocking armor off of tougher enemies (this is crucial, as you can't grab them with the left tentacle unless their armor is removed).

There are different ways to go about playing the game, and that adds a layer of depth as well. The gameplay accommodates a run-and-gun style of play if you choose to play the game like a straight shooter, while also providing you with everything you need to be a dark God that could theoretically make your way through the vast majority of the game without using guns at all, relying solely on your darkness powers.

There are four different skill trees that you can progress through with the dark essence that you collect from dead bodies, finding relics, and eating hearts. There is actually quite a bit to unlock here, too. There are perks that make abilities you already have better and more efficient, while other perks can unlock completely new powers like creating a black hole to devour enemies and shooting through walls. With a total of 39 perks and abilities spanning all four skill trees, it is impossible to upgrade everything in a single playthrough. Luckily, there's a New Game + where you can pick up right where you left off.

As I'm sure you all know by now, this game does not utilize the same realistic graphical style of the first game and instead favors a more cel-shaded "Borderlands" look to it. It definitely gives the game a comic book feel, but the graphics themselves are a mixed bag.

The stages look fantastic. The clouds in the sky at night with a big full moon behind them look great, and the levels are full of nice details like autumn foliage littering the sides of streets and sidewalks. Also, the stages are full. What I mean by that is for those of you that played Borderlands, when you were in towns, inside stores or buildings that where you'd get missions, there was never a lot of detail in the environment. But The Darkness II's levels are full of stuff to read on the walls, nice furniture, and interesting backdrops like a pool hall, a bordello, and an abandoned amusement park complete with a House of Horrors-style ride that you go on.

This game does not shy away from over-the-top violence. Like I said before, each of the four face buttons perform an execution on an enemy. But there are actually three different executions for each button: two different ones for the enemy facing you and another one for when you grab an enemy off the ground and you're holding him upside down. Let me give you a few examples of the more painful executions. One has the right tentacle stab into the side of an enemy, bite down on its spinal cord and rip it and the skull out of the side of its body. Another will hang an enemy upside down and the right tentacle goes into the ass of the enemy and rips his spine out through his ass. Pretty nasty stuff. And these executions have names similar to what was found in Bulletstorm. For example, ripping an enemy in half with your tentacles is called a "wishbone."

The downside to the simplistic graphical style is that the guns, weapons, and some character models lack any significant detail which, compared to the rest of the game, really makes them stand out as an eye sore.

The story (don't worry, this will be spoiler free) is, in my opinion, definitely one of the best single player "FPS" stories I've experienced in a good long while. The game spans 18 levels and there are nice bits of story that break up the non-stop carnage of the average stage. There are plenty of mind games at play in the story and there is a choice to make at the end, adding a little extra attraction to the New Game +. Despite the grisly nature of the game, The Darkness II has moments of love and meaningful tender affection that surpasses nearly every other shooter that's tried something similar. And while there are not many games in the shooter genre that deal with love, that doesn't change the fact that this game still does a great job with the pacing and really does provide a connection to the characters that makes you want to know what will happen to them.

Full disclosure time. The main story is short. No matter which way you slice it, the 18 chapters will likely last you around seven hours if you're not rushing, talk to the characters in the game world and looking for the relics. Between most stages, you will find yourself at Jackie's mansion. It's more or less his base of operations. While here, you can talk to people such as mobsters in Jackie's employ to his dear Aunt Sarah to the cleaning lady. Some of these characters just a few canned lines of dialogue, while others will have an in-depth conversation with you. The things people will talk to you about change each time you're at the mansion. In addition to talking to people, you can go out onto his balcony where you can partake in two simple shooting minigames. You get nothing for doing these, save for an achievement, but they're mindless fun for a few minutes. During the story missions there are 29 artifacts hidden in the game world. And I use the word "hidden" very loosely. Each relic has its own dark history and story you can listen to, and each one gives you 300 essence points which, when compared to the 10-35 points you get for killing the various enemies, is a nice incentive.

Outside of the main game is a mode called "Vendettas." This mode consists of eight levels and really serves as a nice companion story to the main game. Basically, you choose between four characters who have small amounts of darkness powers and you're given jobs by Vinnie, who is Jackie's right hand guy. These jobs consist of small stories that run parallel to the main storyline. An example is the first mission has you going after a guy who Jackie asked Vinnie to bring to him towards the beginning of the main story. The beauty of this mode is that it isn't some lazy thrown together mode. Each stage is entirely new. There's no doing a different objective in a familiar location. These are entirely new stages in new places. On top of that, each character has their own skill tree that you can level up just like Jackie. There are also eight hidden artifacts to go after as well. This mode can be played offline in single player or online in a four player co-op game. This campaign has its own unique bosses, too. It will likely take you up to four hours.

Lastly, there's a mode called "Hit List."This is a mode that is comprised of bite-sized missions that task you with eliminating someone that is loosely tied to the overall narrative of the main story. These characters are more like behind the scenes characters that have, in some small way, something to do with something that happened in the main story, despite never being mentioned. There are 18 of these missions. Eight of them are levels from the main story, while four are online-only levels that take place in new areas. The other six are new levels for a single player. As you can see, there is a lot more here to sink your teeth into then you were probably expecting. If you did the main game and all of the other modes, you're looking at an easy 15+ hours of gameplay.

I thoroughly enjoyed The Darkness, so I was very excited to get the sequel. I admit I was initially afraid that the game wouldn't be worth the money after impressions and reports started to surface criticizing its length, but even so, most sites and magazines have still given it positive reviews and I can completely see why. There's a bunch of stuff to do, the game has a fantastic story, and it's just plain fun. I highly recommend this game to any fan of shooters that likes a little story and variety to go with a big dose of action. There's not a ton of depth in The Darkness II, but gamers will find a hell of a lot more to chew on here than in 90% of the other shooters on the market today.