The Playstation hit makes itself a hidden gem on the small screen. 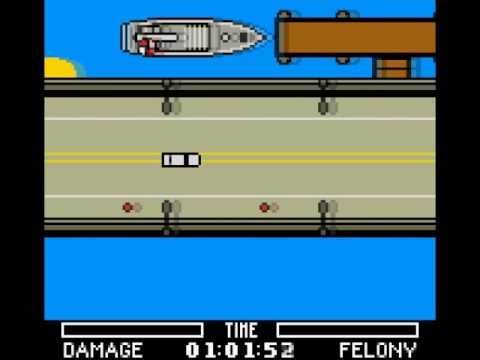 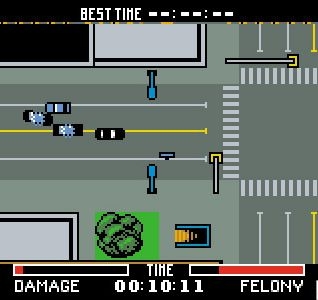 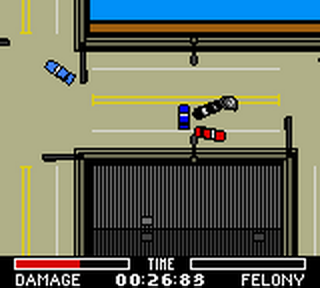 The game's main story mode begins in Miami, Florida with you as the driver. Your mission is to pick up your fellow gang members from a bank robbery, and get them to a safe drop-off location. As the game progresses, you take on more missions for the gang as you progress to two other cities; Los Angeles, California, and New York, New York (The Game Boy Color Port removes the San Francisco Location present in the Playstation version). Missions in the game range from driving gang members around to destroying rival gang members' cars- all of these have to be done with as little damage to your car or police attention (measured by the 'damage' and 'felony' meters, respectively) as possible. For every mission you progress to, you get a four-symbol code to enter in order to return to it (the game lacks a save battery). With a total of 15 missions as well as other side games, Driver on the Game Boy Color packs a lot of bang for the buck (at the time of writing, easily found for under $5), and is definitely worth picking up.

-Driving Games: This is pretty self explanatory. Games range from chasing down enemies and destroying their vehicles to running away from the cops and surviving as long as you can.

-Take a Ride: This mode allows you free reign of the city. You can choose from a small selection of vehicles to drive (mostly ones you drive in the main story mode), and drive around the city of your choice, doing what you please. Drive like a sane citizen, drive like you stole it, it's up to you. One of the biggest flaws in this mode is that you can't lower your 'felony' meter as you could in games like Grand Theft Auto. This means that if you don't want to have cops following you, you have to be very careful to not hit other cars or objects on the sides of the road.

While Driver has great graphics and great gameplay, it does have its flaws.

Controls: Using the D pad on the Game Boy color makes it hard to control your vehicle. It becomes very easy to lose control and hit other vehicles due to the lack of precision that the GBC's D pad has. If you have a Game Boy Player at your disposal, the Gamecube's Joystick makes steering immensely easier.

Difficulty: One of the larger problems on this game is its difficulty level. The game doesn't stay consistently difficult, nor does it rise in difficulty throughout the game. This means that you could be stuck on one mission midway through the game, then pass it and whip through 3 more in a matter of minutes.

Lack of Story: It's understandable that with less power in the Game Boy Color than the Playstation, the game has to be simplified a bit. However, the storyline in this version is spotty at best. Besides the necessary information the game gives you right before you start a mission, little info is given as to what is happening and why it is happening. Roughly 2/3 of the way through the story mode, the game arbitrarily tosses the name 'Granger', and briefly talks about how he and his rival gang need to be destroyed. This is the majority of any story you can see in the game.

Lack of a Save Battery: Parts cost money. More money spent means less profit overall. It's easy to understand that logic in a non-first party game (on a handheld at that), yet Driver could have benefited immensely from a save battery. The game uses a password system in order to resume any progress you made before you last shut the game off, forcing you to write down the code every time you get a new mission. It's a minor annoyance to keep a pen and paper with your Game Boy, but the passwords entered also affect what cities you can visit in the 'Take a Ride' mode. That means if you don't have a code past Los Angeles or New York, you can only play in Miami. A rather pointless feature made more evident by the missing save battery is the 'Best Times' function, which keeps track of your personal records from the 'Driving Games' mode- until you turn the power off. It's ultimately a pointless feature, but could be frustrating for anyone who wants to time themselves on missions.

Overall, Driver is worth a try. The game can be a bit frustrating at some points, but any flaws are overshadowed by how well this port was made. With all things considered, I rate Driver at a C.
Review Page Hits: 1 today (548 total)
mediahook