Quite possibly the funniest videogame in the history of the craft. 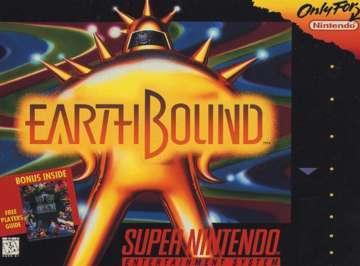 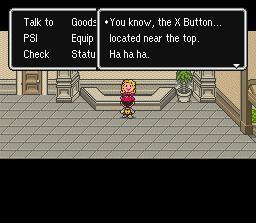 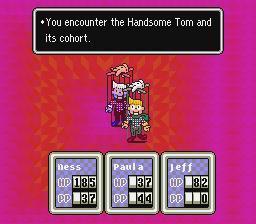 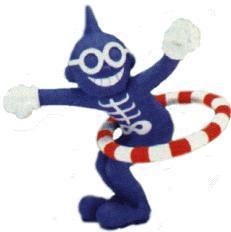 Video games rarely make me laugh. Generally, I consider a game to be mildly humorous if I happen to chuckle once or twice. When I finally got around to acquiring Earthbound last year, I really had no idea about what to expect. As a young lad I remember seeing advertisements in Nintendo Power with the odorous scratch-and-sniff cards, but at the time, all that interested me were Mario and Donkey Kong, so the game came and went without much fanfare in my gaming life. Flash forward ten years and I was a college freshman with little time and even less cash on my hands. After drifting through the first few weeks nearly game-free, a friend of mine from the dorms stuffed a copy of an unknown cartridge in my Super and demanded that I begin a journey through his all time favorite game, Earthbound. After beginning with a slight bit of apprehension in my gut, I quickly grew to love the bizarre humor, crazed characters, and all else that occurred in the wacky universe of Earthbound.

When the story begins, you take control of a boy by the name of Ness who resides in the peaceful town of Onett. Although things appear normal from the outset, events quickly take a turn for the worse when an asteroid collides with a nearby mountain, creating frenzy with the locals and their pets. As the hero of the story, Ness takes it upon himself to get dressed, have a bite to eat, and venture out into the unknown, armed with only his (slightly) faithful dog, King and a broken tee-ball bat. As soon as you can say the words "fuzzy pickles," Ness is forced to embark on an adventure chocked full of mayhem, discovery, and nighttime stuffiness.

A videogame review isn't complete without a hasty analysis of the technical aspects, so read ahead and be dazzled! Graphically, Earthbound may appear to be lacking when compared to the lavish efforts of Squaresoft on such games as Final Fantasy III or Chrono Trigger. Yet, the bright colors and rudimentary sprites create an excellent mood for the type of game that Earthbound is. Not every RPG has to have an airship and an arch angel for a villain, and Earthbound proves that theory with its psychedelic battle graphics and new age retro hippies. As far as the music goes, Earthbound creates an aural delight with its catchy town themes and haunting dungeon ditties. Let's just say that I would purchase the soundtrack if one were available. Game play-wise, Ness and his cohorts control much like any role playing game for the SNES, creating nary a problem for the gamer when it comes to traversing the vast landscape that is Eagleland. The battle system, while at first appearing as basic as one can get, proves also to be a rather fresh experience. During confrontations, the screen portrays the enemy, your character(s) respective health and magic points, and a visually pleasing, lava-lamp styled backdrop. When the enemy strikes, your health begins to trickle down at a quick but not instantaneous pace, creating an all-new play mechanic during battle. Occasionally, if struck with a fatal blow, you can actually emerge victorious if you act fast enough and kill the foe before your health drops to zero! As for the single game play con, it must be said that the revive item, or 'cup of life noodles,' appears very rarely, often forcing you to revive a downed character by heading back into town and utilizing the local doctor to perform his magic. Such a task doesn't prove to be a large problem due the game's reasonable difficulty, but it can be a slight annoyance.

Overall, I consider Earthbound to be one of my all-time favorite games and I urge anyone with a taste for the irregular to take the plunge, the high price tag is well worth it.
Review Page Hits: 0 today (1,079 total)
mediahook