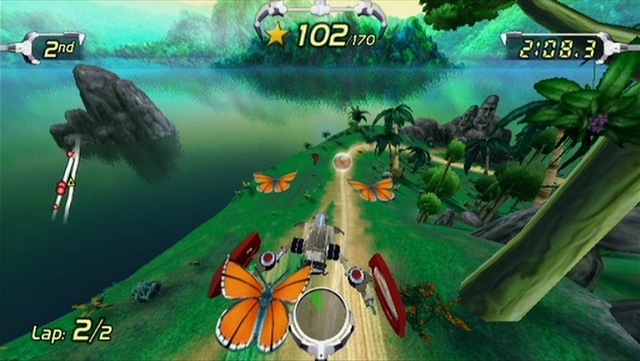 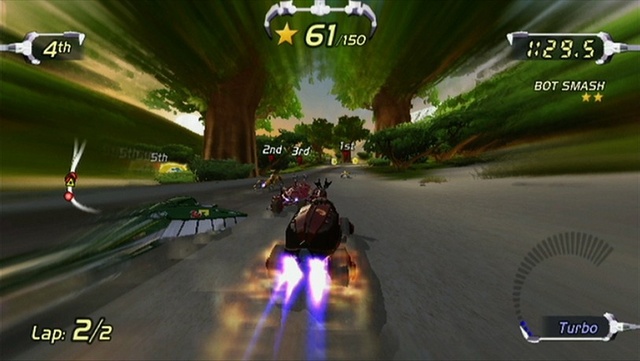 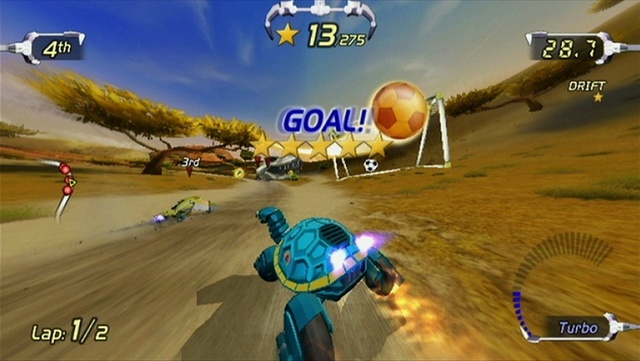 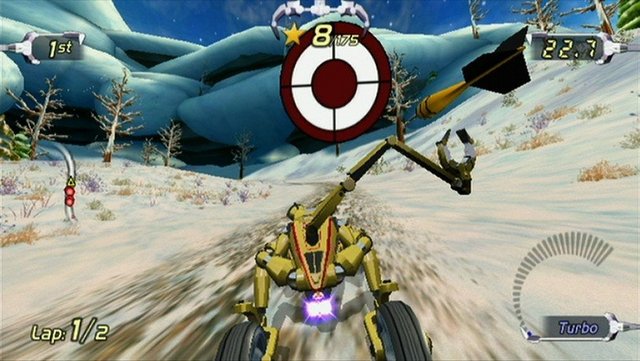 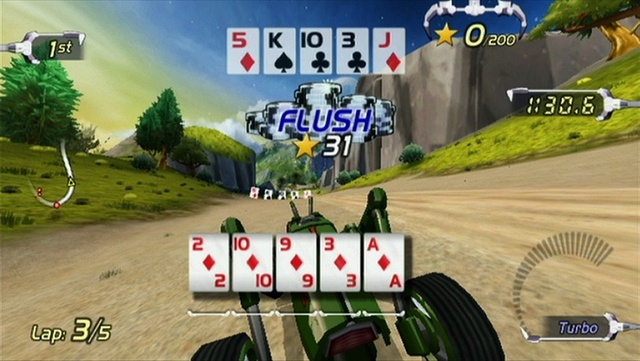 Way back when the Wii hit North American shores, a cult classic launched with the system, too. Sure, it was greatly eclipsed in interest by a brand new Zelda game, but Excite Truck was one fantastic arcade racer deserving of respect. This time around, developer Monster Games (NASCAR: Dirt of Daytona, Test Drive: Eve of Destruction) has ditched the bulky four-wheelers with bots resembling something out of Transformers Beast Wars. The end result is Excitebots: Trick Racing for the Nintendo Wii, and it's one heck of a ride.

Racing is just half of the equation in Excitebots. Hence, Trick Racing. Sure, getting first place is optimal, but you have to do it in style. You don't win races solely by crossing the finish line in first place. With Excitebots the goal is to earn as many stars as possible, and they're readily available by performing a plethora of tasks. In the single-player mode, you start out with the School Cup, a set of four races which can be chosen at will. Clear all the tracks in a given cup to unlock the next which features another set of new races to complete. Each track has a minimum amount of stars needed in order to advance, but to unlock the two bonus difficulties you'll need to shoot for far more stars in each track than the bare necessities.

So how do you save up stars? Essentially -- by doing anything and everything. In Excite Truck there were much fewer ways to generate stars to your total: wreck other vehicles by plowing into them, performing aerial spins, running through a swath of trees, and drifting, for example. In Excitebots, there's so many more avenues when it comes to accumulating stars. There's several mini-games that play out directly within each race. You can knock a soccer ball into a giant net as you make a turn, slam into a set of bowling pins, smack a football through the goalposts for a field goal, timing your swing in order to hit a home run, and many more. Any game where you can fish, chuck a cream pie into a clown's face, and bang a tambourine in time to "Shave and A Haircut Two Bits" while you race is in an entirely different dimension of awesomely nuts. There's no shortage of times where you'll grin from ear to ear -- perhaps even unknowingly -- as you play through the game alone or with friends.

Partly a reason for that is the much larger amount of personality put into the game. No longer are you careening through curves with massive monster trucks. Instead, you're controlling a bot -- each of which is based on an animal or insect. Each bot has different racing stats and multiple forms. You just drive over an item to temporarily change forms. Your bot can rise up on two legs, marching through dense forests without any fear or smashing with a forceful kick any rival that dares to stray in your way. In this form your bot can grind along rails as long as it maintains its balance. Alternatively, if the air is more your thing, your bot can glide through the air, collecting butterflies -- five stars per insect -- as your bot slowly floats back to the ground. Of course, you can't just mess about trying to collect stars either, as crossing the finish line first awards 50 bonus stars to your total -- usually the amount between an "S" and an "A" ranking.

Tracks are really well-designed, and they span locales from cactus-covered Mexico and ice-infested Finland to Fiji, Guatemala, Canada, among others. One track you'll be speeding over stone walls in China, while the next you'll be soaring towards an ancient Scottish castle. There's always one great racing line in order to rack up the most stars, and the fun part is tracking that line down for yourself. There are multiple routes, hidden shortcuts, and out-of-the-way areas that may take longer to go through, but they also reward a multitude of stars. Passing through golden icons will not only unveil mini-games or item boxes, but they may also alter the terrain. A hill could rise giving you access to a high pole shortcut you would otherwise not be able to reach. There's so much exploration in each track that you'll want to keep playing through them over and over until you find the right racing line to take, trying to run through it flawlessly. There are also several rather challenging mini-games and an entertaining racing take on poker to round out the single-player package.

Even if you don't achieve your prized "S" rank in a race, each and every race that is finished puts your collected amount of stars into a bank of sorts. Not only can these stars be used to purchase new player icons and trophies, but they can also be spent on new bots and paint jobs. Something that's irksome is that when you buy a paint job, such as blue, it's only unlocked for the bot you bought it for, instead of for everyone. This means having to invest in colors for everyone. Not only that, but after you race with a given bot for a set number of races, you'll earn a special paint job for that bot. Actually, you'll earn the right to buy that special paint job. Either that or get twenty-five "S" ranks with that bot. Case in point, it's a very lame way of padding the length of the game for someone who wants to purchase a cool paint job for their favorite bots.

Thankfully, you don't have to earn stars exclusively in single-player mode. Excitebots allows for up to six players to race online. You can race with friends or against total strangers. Matches with strangers run smoothly and without a hint of messiness. Players start the session by selecting any of their unlocked bots, select a track to race on, and then bet stars -- anywhere from 0 to 2,500. The race selected is randomly chosen. Meanwhile, if anyone enters the game while the match is still being played, they'll be able to watch the race to its conclusion, and then join in. Depending on the player's placement, they'll win a multiple of zero to five times their bet, up to 12,500 plus stars earned while racing. It's a much easier way of breaking the bank, but it's only good for online. Those without an internet connection for their Wii won't be able to gain currency anywhere near as fast.

Like Excite Truck, Excitebots uses the Wii remote to steer, held horizontally, as if you were playing the old Nintendo Entertainment System. It worked well with Truck, and it pleases me to say that it works even better with Excitebots. The steering is much tighter, and you hardly ever feel that you're not in control of your bot. The 2 button is used as the gas, and the 1 button is used for braking. The d-pad, when pushed, uses your bot's boost in order to speed up as long as the button is held down. However, if the boost meter stays full for a second or two, your bot will overheat, making it slow down considerably until it rejuvenates. Either let off the boost to allow your bot the time to recover or drive into a pool of water. Boost management is just part of the strategy involved when racing in Excitebots.

There's plenty of context-sensitive parts of races where you'll have to perform a gesture or repeated movement with the Wii remote in order to nail a trick. Each bot comes with a tail that can grab onto the plethora of poles found throughout the game's twenty tracks. When you start spinning from the pole, you'll get a small Wii remote prompt that shows when you thrust the Wii remote forward. Nail the motion correctly, and you'll get jutted forward with an immense boost of speed. Thrust too soon, and your bot will start flying towards the ground out of control. You'll then have to carefully turn your bot with the Wii remote so it lands on its wheels and recovers. The only real definition of waggle that Excitebots features is when you crash and need to respawn. There are also red bars that are used in almost, if not every, track in the game. These require you to match your movements with the Wii remote prompt on the screen. In this case, you roll the Wii remote (buttons facing the ceiling) like you're turning a crank, faster and faster, until you automatically boost forward. While these can interrupt the frantic nature of races, they have a great benefit, which is an easy ten stars each time they're utilized.

A common complaint with Excite Truck was that the music was horrible. While it was rather grating, the music in Excitebots is much more relaxed, light-hearted, with no "butt rock" included. Composed in part by Metroid series composer, Kenji Yamamoto, the soundtrack's mileage will vary with most listeners. As for the visuals, Excitebots is quite the looker. The color palette is colorful and vibrant, and the draw distance is impressive, as you can see individual trees far into the horizon with no pop-up. Everything chugs along well, too, with no slow-down of any kind.

Excitebots: Trick Racing blew by my expectations. It's a game that came out of nowhere, had little buzz, and is one of the best arcade racers currently on the market this generation. The speed is fast, the action is high, and the absurdity of it all is absolutely abundant. If you've ever wanted to knock one out of the park, kick a field goal, catch a shark, and hit a bullseye, all the while putting the pedal to the metal, then Excitebots: Trick Racing isn't just right for you, it's right for every Wii owner.