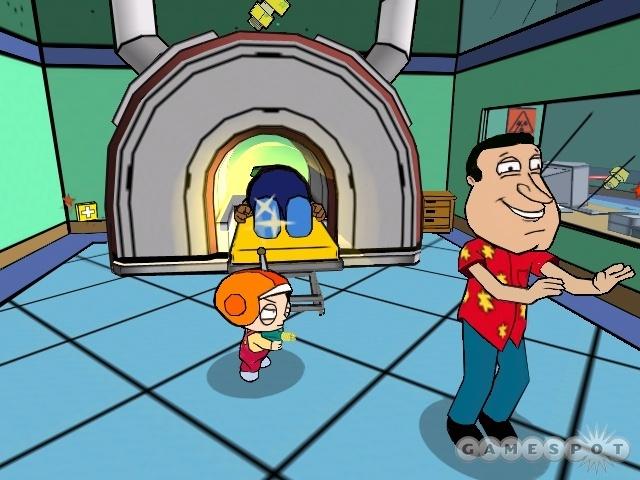 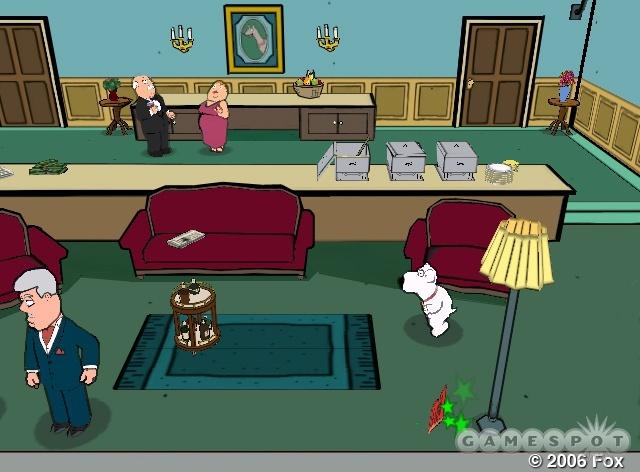 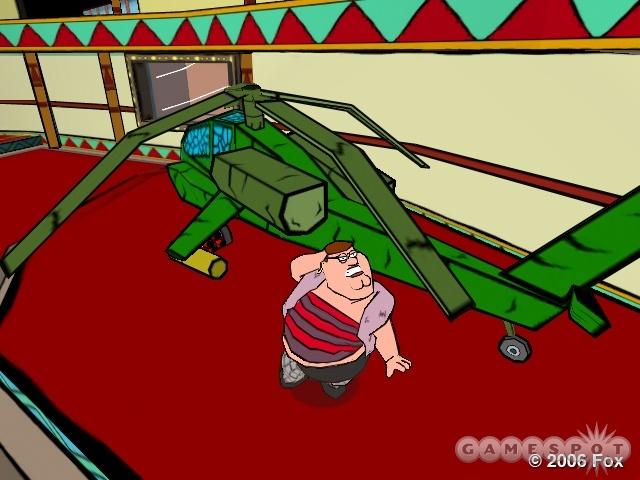 Yes folks, first the show was cancelled, then after a lengthy hiatus off the air, the show came back....now 2K Games has done the unthinkable. The Griffin family has taken over your PS2 and XBox.

For starters there are actually three different types of games/stories in this game.

First you start as Stewie in a platforming style shooter against his arch-nemisis Bertram (who happens to be his unborn brother in the show). Stewie can jump, float and fire his laser pistol. The pistol does recieve upgrades as you collect parts throughout the game. Another piece of his arsenal is the ever famous "Mind Control Device." Using the Device, you can use the people of Quohog, R.I. as your weapons.

In the second part of the game you get to play as Peter in a side scrolling version of Final Fight-esque style. Peter is after his arch nemisis the evil Mr. Belvadere.......he does go through his phases....or costumes....Peter, Hooker, Anna the Robot.

Finally you play as Brian in a stealth mode type game. Brian is trying to track down the father of Sea Breeze's puppies.....yeah! This is actually the most annoying part of the game to me.....but on with the particulars.

The games graphics are good, but look a little blocky. The color and shadowing is done really well, and the only downfall of the graphics is the fact you easily see the blockiness in the characters.

This is the BEST part of the game, because the voices are all done by the actors from the show, and the humor is right on par with the series. Seth McFarlane did a great job getting everyone together for the game, and it definitely leads me to believe the show is gonna be around for a while.

The gameplay is actually quite smooth. Playing as Stewie in the platforming stages is fun, but it gets a little difficult when jumping to smaller platforms later in the game. Peter's levels are really enjoyable as you unlock different fighting moves throughout the game, but it does get kinda monotonous after a while. Some enemies are immune to certain attacks, so you are always trying to figure that out as well. Brian's levels are by far the most annoying in the game, because you get no new moves and nothing changes throughout the 8-10 levels you play as Brian. It really gets annoying trying to sneak past people and some guy you can't see notices you and you have to start all over again.

This is what really ruins the game, because there are no unlockables and no real reason to play it again beyond the first time beating it, except for some fun playing as Stewie and killing people.

The game is really easy to pick up and play, I figure about five minutes with each character will teach you everything you need to know to beat the game. Again, Peter learns new moves later in the game, so you do get a little variety, but not much.

Family Guy is great fun the first time through, and I beat it in almost 6 hours. This is a game definitely worth renting, but I would do well to stay away from buying it on impulse. But after 22 levels you will be able to quote the almighty Stewie.......