THIS IS THE BOOK THAT BROUGHT ME BACK TO THE FANTASY GENRE. 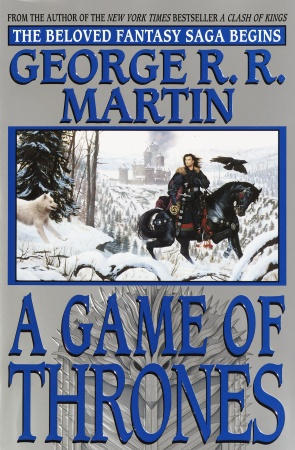 It used to be that one could read Tolkien, Jordan and maybe a few additional names and he or she would discover that there was no more fantasy reading worth writing home about. Let's face it, some fantasy authors just have no business writing books. So when I picked up George R.R. Martin's first book in the popular A Song of Ice and Fire series, A Game of Thrones, I was understandably wary, but something happened along the way. I found myself immersed in Martin's storytelling and falling in love with the characters, creatures and lands he created. I couldn't put down the first book and after finishing, quickly purchased the next two books in his famous series. Not since the first three novels in Robert Jordan's Wheel of Time series have I read a fantasy series that so completely overwhelmed me. Eagerly awaiting the fourth book which will hopefully reach publication by fall of 2004, and looking back on the first three books, I think there were three critical strongpoints that made me love this unique series.

The first strength would be characters, characters, and more importantly -- characters. How many fantasy books have you read that had all the great genre elements such as dragons, swords, magic, and so forth, but never one single interesting character to bring life to the novel? Martin doesn't just give us one hero, he surrounds us with an epic genealogy of lords and kings. And not just heroes! Martin gives the villainy just as much attention and usually clouds the issues by purposely not providing the reader with a fine line of good and evil. Everyone is human in his stories and it may be the first fantasy series I've ever read where a cripple and midget play a huge role in the story. (No, not a halfling-hobbit midget, a real human dwarf!) No one is perfect in Martin's A Song of Ice and Fire series. All of the players seem to be unwilling victims of their own fragile humanity while wrapping themselves in epic power struggles that would make Shakespeare proud.

Another crucial element in Martin's series are detailed histories and geography. When I first read A Game of Thrones, I was almost overwhelmed. There were many new people and places I needed to know but luckily the books are equipped with appendixes that you can easily flip through to keep you updated on all family and political ties. Also, how many fantasy books have you read in which travel feels like a day on a 21st century highway and the map doesn't seem to have a realistic scale? Martin avoids the common mistakes and not since Tolkien have I read a book in which so many details inhabit the lands in between cities and rivers.

Finally, a third strongpoint that pulled me into Martin's series was realism. Sometimes I'll pick up a fantasy novel and while I enjoy the story and central characters, I feel like any average Joe in today's world could easily fit into the author's world. In other words, I think a lot of fantasy authors rely on boring medieval clichés (that is, if they even try to give their characters on authentic period feel) or 21st century attitudes. In Martin's books, I feel as though I'm exploring a world not too far removed from medieval Europe. Too often with today's popular fantasy material, creators add liberal amounts of magic and common fantasy elements. With Martin, I discovered a world which has obtained the same balance that was felt in Tolkien's worlds. Wielding magic isn't the fantasy equivalent of blowing off a magic machine gun in Martin's books, even though many fantasy books today like to describe it as such.

Maybe the best part about Martin's books is that I know there is an impending grand finale. Remember when you read Jordan's Wheel of Time series and felt that way only to give up a few books later? In all three of the novels in A Song of Ice and Fire series, the reader gets a sense that everything is getting closer to one final epic confrontation instead of the all too common trend of fantasy authors to try and cash in on one more book to prolong the series. Martin has even announced that only six books are planned in his series and it's good to know that a compelling best-selling fantasy series actually has an ending in mind. All three books are in softcover now and Martin fans are anxiously awaiting the next addition. My advice would be to pick up the first book A Game of Thrones quickly because you'll find some of the best fantasy writing in recent years and a terrific story regardless of your interest in the fantasy genre. Book trading is still a small industry at the Game Trading Zone, but hopefully that will change as more members explore exciting new authors such as George R.R. Martin.