A Much Different Experience For the "Mana" Series. Strategic Gameplay with an Interesting Story. 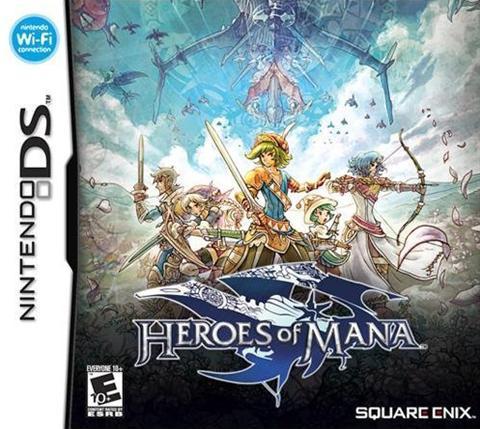 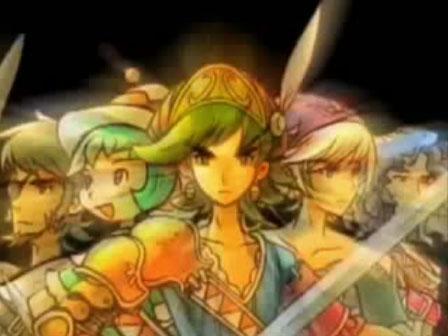 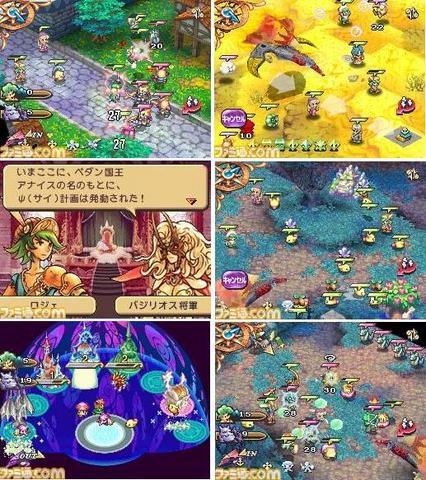 Heroes Of Mana is a much different game than the traditional "Mana" games, it is purely a Real Time Strategy Game.

Heroes Of Mana starts off aboard a flying ship with a group of characters.The Characters are Roget, Yurchael, Gemiere, Qucus, and D'Kelly. Roget is the main character in the game, but Yurchael is the Captain of your ship. You are from the Peddan Army and are on a secret mission. Your mission is to spy on Beastmen and attack them. Shortly, you are shot down by a fleet of Beastmen ships. You crash and are separated from most of your crew. Now, it is just Roget and Yurchael. Yurchael goes over some tutorials with you and explains everything about combat. The 1st thing you must do is locate Gaia Stones and Treant Berries. You need these to summon troops that you will need in combat. After you locate them you send Gatherer Troops to collect them.

Soon, you are reunited with the rest of your crew. Then you are ambushed by Beastmen and their general. But before you get a chance to fight, the Beastmen leave because their town is under attack by the Peddan army. You decide to follow the Beastmen to their town and see your country's army attacking their villagers. Roget and his Crew don't like what they see and reluctantly fight their own army. After that you gain the trust of the Beastmen and their general, who then join your team. Roget and crew now decide they want to find out what's really going on. Now there is no turning back, because you have become traitors.

The gameplay takes a little time to get used to. There are Commander Units, Ground Units, Heavy Units, Missile Units, Flying Units, Gatherer Units and Special Units. Before each battle you select your Commander Units. Your commanders are Roget, his crew and any other characters that have joined your team during the game. Some battles you can only select 3 commanders or 4 etc. The most commanders you can pick at a time is 5, but Roget is always picked as one by default. Some battles, other members will be picked byt along with Roget if they are necessary to the battle. The Commander Units act as regular fighting units and you can equip them with armor and special equipment. Commander Units are also the ones that cannot die, or you lose, and your game is over. Most battles it only matters if Roget dies, but sometimes if there is a specific commander that was picked to fight that battle, he/she cant die either along with Roget.

Some battles there are computer controlled characters you must save or defend that are part of the story, and they cannot die either or it's game over. But after winning, most of the time, the character you were defending will join your team then. Mostly throughout the game, if Roget dies or your ship is sunk, it's game over. Some battles there are other conditions too.

Your winning conditions range from defeating the enemy's Leader/Commander, sinking their ship, collecting Gaia Stones to use special weapons, etc.

All units have a battle law to them. For instance, Missile Units are strong against Flying Units and deal double damage to them, while only receiving half damage from Flying Units. Ground Units are strong against Missile Units and weak against Heavy Units. But Heavy Units are weak against Flying Units, and Special Units are all around. They aren't weak or strong against anyone. Some Special Units have abilities. One Special Unit in particular can go underground and avoid being attacked, this is good for exploring the map while not being attacked. Also, this is good for sending an attack on the enemies ship without them being harmed along the way. If you can use this law of battle wisely you can make your fights easier.

All units are controlled on their own. This game is a complete Real Time Strategy game sorta like Ogre Battle; you just direct units where to go and they act by themselves. You use the stylus to touch a commander or one of your fighting units, they will blink and you then tap a spot where you would like them to go. One cool feature i liked was the group command. There was an icon at the bottom right of the screen, and when you tapped it, everything would freeze and you could use your stylus to circle a whole group of units and send them all to the destination you want. I thought this feature was really nice. The whole game is controlled by the stylus and nothing more. The D-Pad and buttons have no use, but the L and R buttons pop up the map and also show status of the battle.

In the beginning of each battle you have to summon a Gatherer Unit base. It doesn't cost any Gaia Stones to do this. And the Gatherer Units don't cost Treant Berries either. All unit bases cost Gaia Stones and summoning units costs Treant Berries. At first, you have only 1 type of Gatherer and 1 type of Flying, Heavy, Ground, Missile and Special Units. As the game progresses, they will level up, and you can summon stronger units. But the stronger they are, the more berries they cost. Same thing with the Gatherer Units, the 1st ones don't cost berries but the leveled up ones do. The only differences in Gatherer Units are, some can move faster, some can fly, some can swim and jump, and some have higher HP. Also, some can fight but they are weak fighters. You can also summon a Healing House which will heal units that are standing by your ship. Later you can summon Benevedons, which are elemental creatures who will deal a single massive attack on the opposing army, resulting in heavy damage to them. You can summon them again in the same battle as long as you have the Gaia Stones for it, they cost a lot of Gaia Stones to summon.

The best way to win is to gain the upper hand fast in battle. Get Gatherer Units out collecting berries and stones. Often, you get some time to gather a good amount of berries and stones before the enemy sees you. Once they see you, they will send a barrage of units your way. Sometimes you aren't even ready and you have to fend them off with what little troops you have and use your brain to take the advantage in battle. Also, you can't take berries or stones with you after battle, so it is best to use all the resources that you have. But, make sure you collect as much as you can, because the enemy has Gatherer Units as well and they may take more berries and stones before you, and then you may be stuck with less units than them. There is also a limit of units you can have on the battlefield. I believe the limit is 20, and that's all units, including Commanders, Gatherers and all the others. But as some die you can summon more. After each battle is over you are graded and then given some treasure/items that you can equip.

SOUND
The sound in this game is pretty decent, there is some good music. During battle, if one of your vital commanders is close to perishing, or your ship is about to be sunk, a short dramatic sound clip will play. This was kinda cool because then you can try and act fast so that tragedy won't strike and your game is over. The music overall is your typical fantasy/magical themed music of the "Mana" games, which also has dramatic music at times. Overall the sound was good.

The main story is about the Peddan army/country wanting to take over the world. During the game they are trying to invade and attack all other countries. Your crew and allies are fighting to stop it. The Peddan army is being led by General Baxillios and King Inath. They are trying to taking over each country and when doing so they release one of Esina's Mirrors. After all of Esina's Mirrors are released, then they can begin Operation Psi. You discover that by finding all the Mana spirits, you may be able to stop their evil plot.

The replay value is kinda iffy. There isn't much of a replay value, unless some time has passed and you want to play it again. But there are extra battles and unlockables after you beat the game. I think there are multiple endings too, but I'm not sure. Plus, you can save the game after you beat it and restart the game with all of your equipment from your last game.

Heroes Of Mana is a pretty good game if you like Real Time Strategies. I'm not a big fan of them, but I have exceptions. If you like the Mana Series like I do, then you should get it. The story is pretty interesting and the battles can be intense, though frustrating at times. Lots of plot twists in the story and so on. Overall, it's worth getting and playing. The game provides a lot of gameplay, i think i played like 22 hours or so and beat it. Not bad for a real time strategy.
Review Page Hits: 0 today (155 total)
mediahook