Pixar is back at it again, this time delivering "The Incredibles", the story of a super-hero family that must save the world from a diabolical madman named Syndrome. Nominated for four Academy Awards, and winner of the Best Animated Film Award. 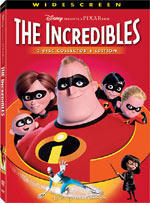 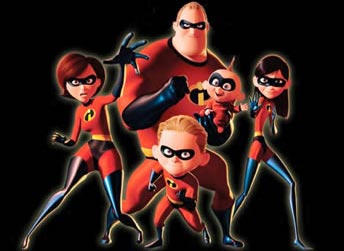 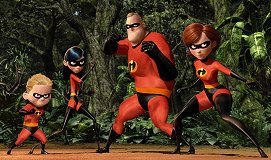 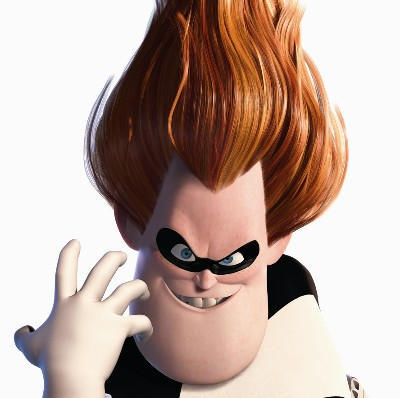 The Incredibles follows the story of Bob Parr (voiced by Craig T. Nelson) from his glory days as a nationally recognized super-hero named Mr. Incredible. His special power is strength -- he can lift cars over his head and drink coffee at the same time. He meets another super-hero, Elastigirl (voiced by Holly Hunter), who can stretch her body any way she wants. She soon becomes Helen Parr and wife of Mr. Incredible. They have kids, who in turn also have special powers. Dash (voiced by Spencer Fox) can run so fast you can barely see him and Violet (voiced by Sarah Vowell) can put up forcefields to protect herself, and also has invisibility powers.

After a backlash against super-heroes, the family must go underground. They must live like a normal family, go to school, get a job, and so on. Soon after Mr. Incredible loses his deskjob, he gets a call from a company wanting him to come out of retirement to stop a computerized robot from destroying buildings and people on an island. Mr. Incredible soon finds himself in trouble when the robot turns out to be built by Syndrome (voiced by Jason Lee), an evil madman, who invents powers, since he does not have any. Syndrome also has a personal vendetta against Mr. Incredible. Pretty soon the whole family is thrown into the mix and must stop this evil genius before he unleashes his robot on the world.

The cast for this animated gem is great, including Craig T. Nelson, Holly Hunter, Samuel L. Jackson, and Jason Lee. Even the director, Brad Bird, supplied a voice for one of the characters, Edna Mode.

The DVD is fully-loaded and one of the better assembled DVD's of the year. The special features include commentary with the director, producer, writer, and animation team; Jack-Jack Attack (an all-new exclusive short film); deleted scenes with an alternate opening; a Making of The Incredibles featurette; seven additional behind-the-scenes featurettes, a Pixar short film "Boundin"; a "Who is Bud Lackey?" featurette; Top Secret NSA files on all the supers; a "Mr. Incredible & Pals" cartoon with optional commentary by Frozone and Mr. Incredible; "Vowellet", an essay by vocal talent Sarah Vowell (Violet); and Introductions with writer/director Brad Bird.

Overall, this is an excellent animated Pixar film. It's probably the best one I've seen. It has more range and more action than other animated films out there. The animations are terrific and the action could rival Spider-Man 2. This movie is for people of all ages. I could not sit through five minutes of Shrek, but I have watched this about ten times already. Kids will love it, parents will love it, teens will love it, everyone will love it.
Review Page Hits: 2 today (606 total)
mediahook