An RPG that delivers a unique feel and gameplay experience which make it worth playing. 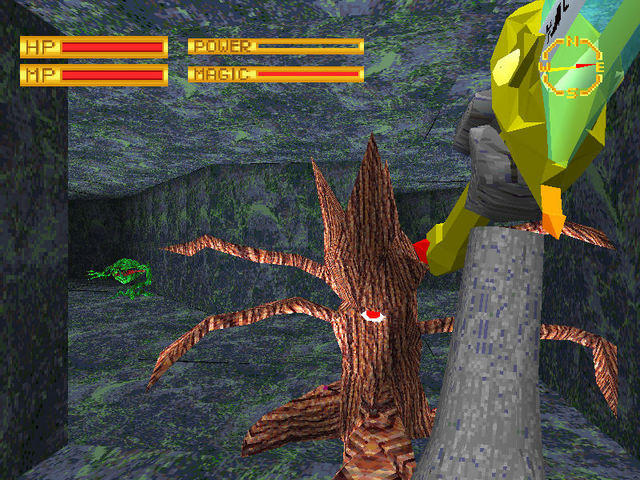 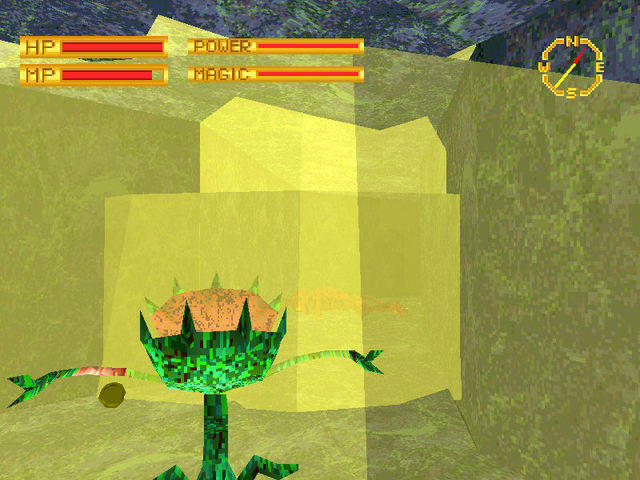 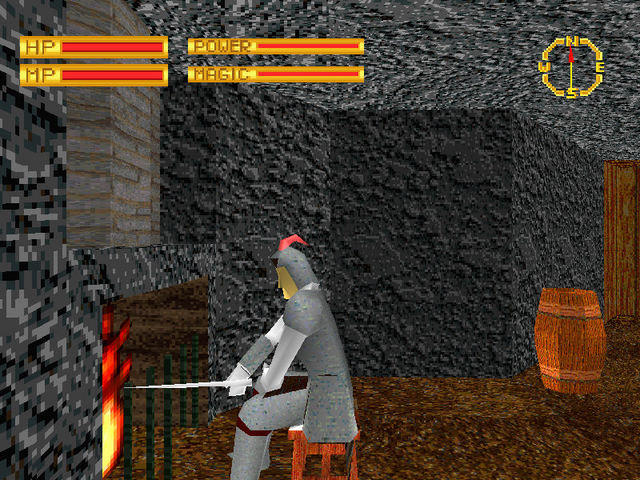 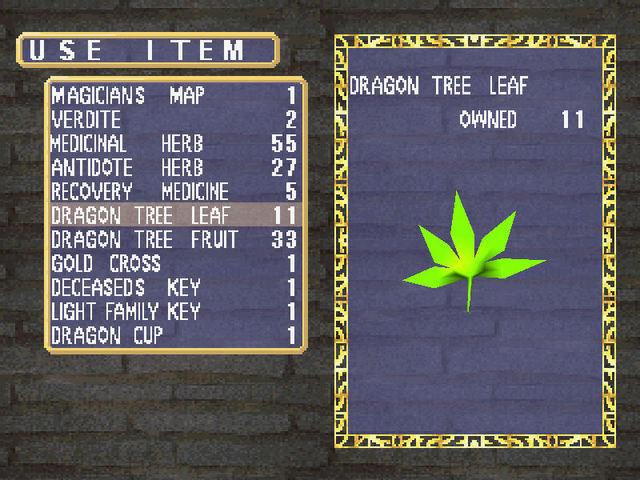 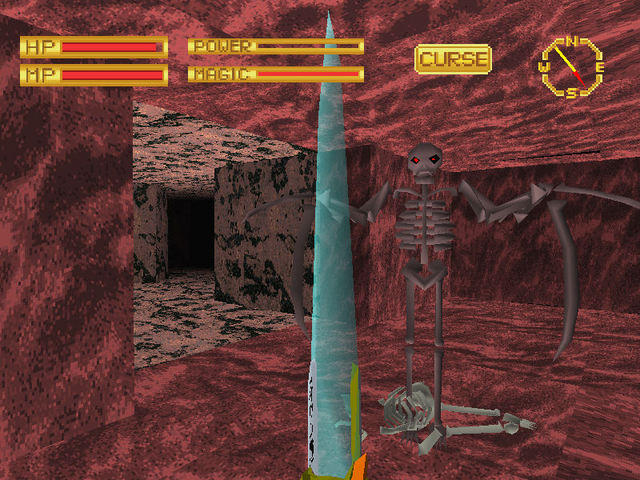 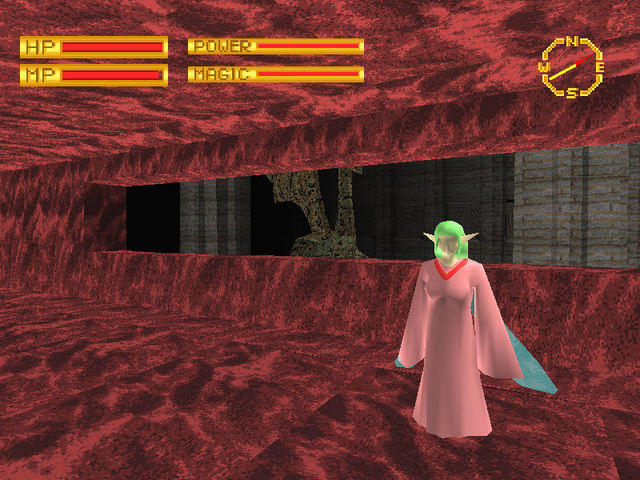 NOTE: An English translation patch is available for this game and this review is based on the translated version play-experience (though, of course, it applies to the game in Japanese as well).

NAME CONFUSION:
There is a bit of name confusion since the first King's Field game was only released in Japan but KF2 was also called 'King's Field' when it was brought to the USA. This KF is the first game in the KF trilogy and a completely different game than KF (USA) which was the second game in the trilogy.

KING'S FIELD SERIES NOTES:
King's Field was a release title for the Playstation's Japanese debut way back in December 1994. The game enjoyed a considerable amount of success in Japan probably due in part to its revolutionary fully 3-D graphics. The first KF was quickly followed by two sequels which loosely continue a plot to its conclusion.
The King's Field series is one of the most love/hate group of games I have ever come across. Though each release received good reviews in its day, many modern gamers tend to despise them. If you are a fan of the other games in the King's Field series, you will like this game as well. If you hated them, you will hate this game more. If you have never tried it before -- read on!

CRITICISMS:
The main things critics point out are slow speed, drab colors and minimal NPC interaction. King's Field is slow . . . no, even slower than you are picturing. You character moves forward at a semi-acceptable speed, but turns like a 1974 Cadillac in an ice skating rink. Enemies turn just as slow so there's no imbalance, but it's something that takes getting used to. Playing the game on an emulator with the FPS turned up can help if necessary. Many weapons swing slowly, but some are quick; their speed depends on their weight. As far as being drab, King's Field revels in a bleak and depressed setting and its drab colors are just part of the overall melancholy mood that gives KF its unique flavor. There are less NPC than most RPGs, but every one of them has a useful purpose- either providing clues or helpful items; personally, I prefer quality over quantity.

INTERESTING CONVENTIONS:
KF was amazingly advanced considering it was released in 1994. There are too many notable and unique (for the day) aspects to mention here, but some of the more memorable are: map that shows your current location (after you find it), quick travel (after you find an item), skills that grow as you use them, protection from death (you are teleported to a safe area upon death rather than 'game over' if you have solved a certain puzzle and possess a certain item), multiple types of damage and defenses (slash, chop, stab, fire, holy etc.) for both the main character and enemies, customizable display and sounds, and easy strafing controls.

GAMEPLAY:
Style: KF is a medieval flavored first person, close-combat game similar (in a general way) to the Elder Scrolls series. But, unlike the overwhelming outdoor sprawling Elder Scrolls adventures, KF involves exploring and mastering several indoor dungeon type areas. In the Elder Scrolls, you are flooded with a plethora of mostly useless and redundant items whereas in KF, nearly every item is hard-earned and has some specific and valuable use. A significant part of KF's gameplay involves exploring - searching for hidden areas or figuring out how to access new areas in order to acquire powerful weapons, armor and spells.

Battles: Battles are in real time, and you always have the option of simply running away. Most enemies only attack forwards, so you will often be trying to strafe or run up behind an enemy to attack it with impunity.

Equipment: Your equipment consists of several slots for armor, one accessory, one weapon, and one offensive spell. The weapon is used for close attacks and the spell is for area or ranged damage. There are also support spells (like healing) which may be used through the menu and various consumable items that do things like cure poison, heal, or permanently increase stats.

Leveling up: Like most RPGs, you level up by defeating enemies, but you also have a 'magic' and 'strength' stat which will increase as you cast spells or use a weapon respectively; these two stats control how fast you can attack and how potent your attacks are. There is a decent array of enemies (though not as many as most 2D RPG's), each with their own strengths and weaknesses; subsequently, you are required to change your tactics appropriately. Many enemies do not re-spawn once defeated, but some will continue to come back, adding a little spice if you have to retrace a previously explored area or want to level up.

STORY:
King's Field has one of those stories that is better if you know it before you play the game. It actually is a profound and intricate plot, but it is told in a minimalist way so that most normal players will completely miss it the first time through. You are a young John Alfred Forrester who enters an ancient sanctuary which has been turned into a royal burial ground to search for his missing father- Commander of the Royal Guard: Hauser Forrester. As you progress through the graveyard, you uncover a the true story behind the founders of the kingdom and their bloodline. I would recommend reading the 'story' pages in the manual as they give the set up which is only barely hinted at through the game. It is notable that Agetec, who brought KF2 and 3 to the USA, maintained poor quality control over the continuing story, so players who are familiar with the USA KF games, might notice some story inconsistencies.

GRAPHICS:
As mentioned earlier, the game design tends to be drab and you won't find a lot of expression in the NPCs, but enemies and spell effects are rendered quite well, especially for an early Playstaion title.

MUSIC / SOUNDS:
Music is an area where the King's Field series traditionally shines. While this KF's music is not as good as the others in my opinion, it's still a strong point in the game and goes a long way toward setting an appropriate mood for the various areas in the game. Its style ranges from Classical to kind of a Techno-SNES era sound. Sound effects are pretty good too, and support the general mood. Each creature makes its own sound so, just like in the real world, you can get a good idea what's around the corner by listening. There are no voices in the game and all dialogue is read as text.

CONTROLLS:
Controls are another area where KF shines. They are easily mastered, yet fully functional. The D-Pad is used for moving and turning while the shoulder buttons are used for strafing and looking up and down. Most other commands are carried out with 3 buttons: weapon attack, magic attack, and 'activate'. The most frustrating thing that USA players are likely to experience is, like all Japanese games, the 'O' and 'X' button's functions are reversed from the usual USA conventions.

REPLAY:
There are a lot of secrets you are not likely to find the first time through so there is a moderate replay value.

BOTTOM LINE:
King's Field delivers a unique feel and gameplay experience that makes it worth playing. Because KF focuses on exploration more than quick-paced hack and slash, it might not be the game for you if you have a short attention span or if you are easily frustrated. Most people who have become fans played through their initial frustration over slow-speed and learned to savor the quest to thrive in a melancholy and decidedly hostile world, cut off from all support, where you must utilize everything available to you just to survive.
Review Page Hits: 0 today (319 total)
mediahook