The Last Blade: Beyond the Destiny (Neo Geo Pocket Color)

Serious Swordfighting in Your Pocket 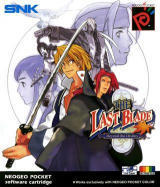 SNK made a habit - albeit good habit - out of porting every single fighting franchise they have to the Neo Geo Pocket Color. One of the lesser known SNK fighting franchises is The Last Blade and it makes its NGPC debut with the subtitle 'Beyond the Destiny.'


Gameplay & Control
Not like its similar counterpart fighting game Samurai Shodown, Last Blade's gameplay is slightly slower. It's less about flash and more about how to fight. The character list is a good size, offering 14 characters to choose from, but the options given expand the list immensely. After you choose a fighter, you choose whether or not they fight with Speed or Power. With points earned in the game, you can enter the gallery and purchase scrolls that increase abilities and add new attacks to a fighter. Each fighter has 12 scrolls you can apply to them before a battle, choosing two at a time.

There are many modes in Beyond the Destiny, including the staple story mode. Aside from that there is a vs. mode where two NGPCs can link together and play against each other. Back in one player mode there is also survival mode, time attack, training and mini games. Survival sets you up with one life and you see how many fighters you can beat before getting beat yourself. Time Attack gives you 60 seconds to see how many fighters you can defeat. Training lets you practice your techniques. Finally the mini games which include a Home Run Competition and Murkuro. Murkuro is a vertical flight game where you play as a Murkuro and try to avoid and dodge the flying debris.

The control, therefore, reflects the slower style gameplay when executing attacks. Like all NGPC fighters the analog stick works very well especially when performing special attacks. Beyond the Destiny is all about the swordplay, so the A and B buttons focus on the weapon instead of one controlling the weapon and the other a kick attack.


Graphics & Sound
The graphics in Beyond the Destiny are good but nothing too impressive. Once again each character is only one color and most of the time both fighters are the same color during battle. The animations are fluid which is nice with the weapons, and the special attacks are flashy when they take up the entire screen. In the character select screen the characters are nicely colored and detailed which kind of disappoints when you battle knowing what the characters could look like. The backgrounds however are boring. Most games have some movement or at least a lot of color but the backgrounds in Beyond the Destiny are rather bland. Some can be attributed to the series' overall design because in all the Last Blade games the backgrounds were never that standout-ish. The sound is not much to talk about. It works and its catchy during battle but nothing spectacular.


Replay Value
This game has a very high replay value with all the game modes and the vs. mode. Aside from playing through the game to get enough points to buy all the scrolls for all the characters, when you beat the game with each character you get a second version of them and I'm not talking about the Speed/Power versions. And the mini games are always fun.


Last Blade in general is a fighting series that is often overlooked and overshadowed by the Samurai Shodown series. Beyond the Destiny has a ton of modes and gameplay options to keep any fighting fan, or NGPC owner, busy for a long time to come.
Review Page Hits: 0 today (542 total)
mediahook