Mario Kart 64 is one of the top five best games of all time IMO. This game has awesome replay value and has such great multiplayer features. 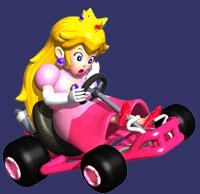 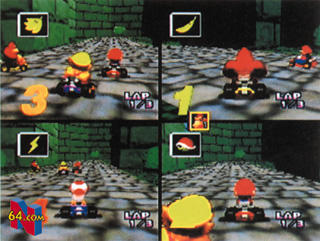 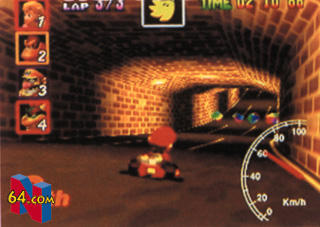 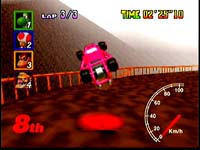 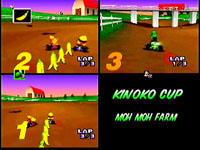 Mario Kart has come a long way since SNES. We first started out with the SNES version, which introduced our favorite Nintendo characters turning in their running shoes and fire power for a go-kart. The game was a big hit on SNES and continued its run with the Nintendo 64 version. It was one of three games that usually found themselves occupying that little black box we call the 64. They were "Mario Kart 64", "Goldeneye", and "Super Smash Bros". Although I played all these games equally, I always had a thing for the GO KART! It was the best of the three in my opinion just because I was in college during the Mario Kart parties that college kids had.

Now, on to the game. First let's introduce the drivers. You have Mario, Luigi, Bowser, Toad, Yoshi, Donkey Kong, Wario and Peach. On one hand you could go with Toad the speedster, who is fast, yet easy to push around. Or you can go with someone like Bowser, who is slow to accelerate, but fast when he gets up to speed and can push around smaller drivers. Now onto the items. There are many items in the game that make the game what it is. As you drive down the track, you can pick up items. These items are strategically placed on the map and any driver can obtain them. Some of the items you may obtain are a mushroom for that speed burst to push you ahead, or a banana peel to throw down to spin-out your opponents. You might get super lucky and get the three red turtle shells and can hurl them at drivers ahead of you like homing missiles Or maybe get even luckier and find a lightning bolt that strikes down your opponents to half their size making them slower and it easy for you to squash them!

Now to the modes. The first has you competing against the pesky computer for the gold trophy in the single-player race mode. You can start out in the 50cc cup and work your way up to 150cc where your opponents are three times as hard as 50cc. You may unlock a secret after completing the 150cc cup. Who knows!?! There are four cups to win (Mushroom Cup, Flower Cup, Star Cup and Special Cup) with each one including four races. As you compete in each cup you earn points after each race which count toward your overall point standings. Whoever has the most points at the end of 4 races wins the Gold, followed by Silver and Bronze. Accumulate enough points and you may see some screenshots from Mario 64, since they did use the same castle from Mario 64 to compliment the beautiful award ceremonies.

The next mode has you battling your friends in battle mode. You can play up to four people in battle mode and have four different tracks to choose from. In this event, you have three balloons floating over the top of your head. The objective is to pop all three of your opponents' balloons before they pop yours. You will be using such items as Red Shells, Green Shells, Banana Peels and the invincibility of the Star Power. This mode is my favorite because this is where you can battle for bragging rights. If you have four people playing, then battle mode is a must.

The last two modes are the time trials and Vs mode. The time trials allowed you to see who could perform all the shortcuts successfully in three consecutive laps and beat out all others for best time. In VS mode, you can race around the track against your friends and you can race up to four people at once. This can be fun if you all are competitive, but I still recommend battle mode if four of ya'll will be playing.

Overall graphics of the game are pretty good. Technology has become so advanced, but I'm still amazed that the N64 could produce such great graphics as they did in Mario Kart 64. The gameplay is smooth and it even has a good soundtrack. The controls are very easy to learn. Not much to them. You got Gas, Brake, Steer, Jump, and Fire. Not hard to learn like some of these newer games that have 900 different button combinations. As far as controlling your kart goes, I think a 5 year old could pick up the controller and learn to control one of these karts. No sloppy handling with these things. Just try to stay on course and please stay outta the water. Lakitu is Mario Kart's official tow-man and I'm sure he gets tired of people who are careless and drive off bridges.

Anyways, Mario Kart 64 has everything from 1 on 1 racing to battles to the infamous time trials. This game is your typical all-night multiplayer college pleaser. We would play it for hours. Why else do you think it became a players' choice million seller? It is a historic game and should be in the NINTENDO HALL OF FAME! GO PEACH!
Review Page Hits: 0 today (717 total)
mediahook