With Mario Kart being the epitome of racing franchises for many years, it is sad to see how little the game changes its dry formula and actually takes several leisurely steps at addressing failing issues. 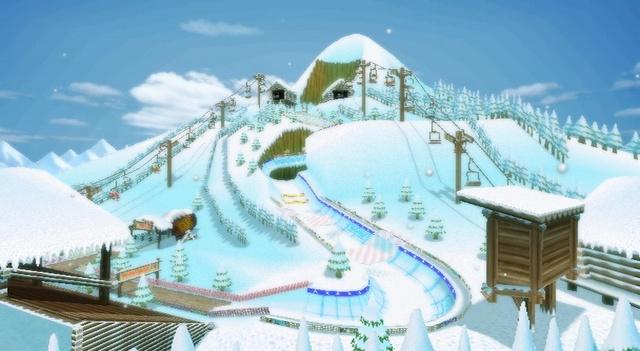 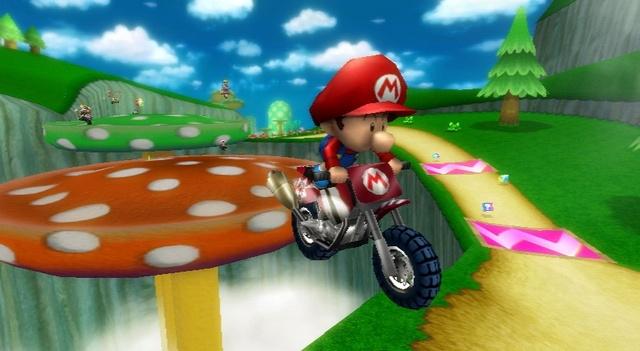 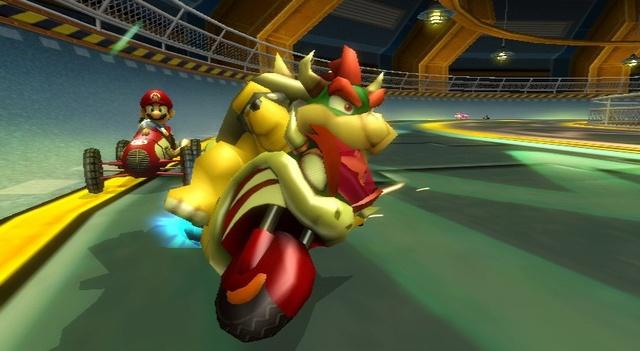 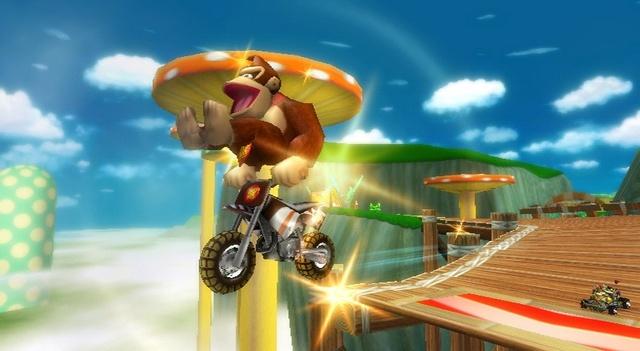 With Wii sales blooming and stores finally getting in more shipments to accommodate those eventful purchasers, Wii gamers are now trying to choose what to play. While the third party support is lacking, Nintendo is still remaining faithful to the devoted, issuing up the newest installment in the Mario Kart series. While this installment has some new tweaks, items, and online multiplayer, you probably won't find much difference between this version and the others that preceded it. It's not a bad game, far from it, it's just a few things make it suffer from too much nostalgia and not enough innovation.

Mario Kart Wii comes packaged with a Wii Wheel, a plastic shell that you place your controller inside to mimic a steering wheel. Right out of the box the Wheel felt less than durable and actually looked like cheap plastic. After cycling through numerous players, each one found it incredibly hard and unreliable to use. Simply put, the Wii Wheel causes more problems than it intends. It lacks the efficient button layout as the classic or GameCube controllers, making racing sometimes disorienting for newcomers. Holding the Wheel with the controller lying horizontal makes the races feel slightly disadvantageous, considering acceleration is the smallest button on the controller.

Using the classic or Gamecube controllers is your best option if you want to get the most out of the game. Both controllers have a very similar button layout and are much easier for anyone to understand when they are ready for a quick match. The Wiimote's button layouts are not necessary a concern, but there are some moments, such as performing jumps and tricks, where using the Wiimote can work against you. When using the Wiimote, you have to physically perform these moves by moving your Wiimote in specific directions, whereas the other controllers require a simple button press. It's a lot more simple to mess up using the Wiimote during a race, and that could lead to disaster overall.

As far as racing is concerned, the same basic setup as previous titles is available. Players can choose between single and multiplayer modes and then choose their respected races. Single player mode only has the closed circuit races, ranging from 50cc to 150cc. However, despite the advancing difficulties, each difficulty requires a different vehicle, offering up a change once in a while instead of just ramping up the difficulty. For example, the 50cc circuit is karts only, 100cc bikes only, and 150cc is bikes and karts. It's an interesting dynamic that should please any fan looking for a challenge. The difference between the vehicles is hard to see at first, but their differences lie in their durability and effectiveness. Karts move much slower but are heavier and easier to ram people, while bikes are faster but susceptible to getting bumped easier by other players and at sharp turns. Determining which vehicle to use on any course is always a fun and debatable argument.

However, despite the different settings, the difficulty surmounted in the game is excruciating. It seems Nintendo wanted to appeal to the many racing fans from other consoles and tried to up the ante to gain their attention. While the 50cc circuit doesn't get remotely hard till the last few tracks, the 100cc and 150cc courses are sometimes impossible to get first place on every race. The reasoning behind this is the unbalanced item management system; something the series has always been good at performing. The favorable items (such as lightning, banana peels) appear way too often, and going from first to last place is as easy and saying turtle shell. There was a moment in a race where Yoshi was enjoying a sizeable lead and got hit by a rogue turtle shell, the delay to recuperate and start up again resulted in him ending up in eighth place. Although the harder difficulties are known for giving players a much more advanced challenge, there have never been games where sizeable leads amounted to nothing. The rubber band AI in the game is ridiculously overused, with the AI characters constantly staying on your tail no matter what you throw at them, however if you get hit with one turtle shell you are left in the dust. Also, another minor annoyance has you losing your items whenever you get hit, which sort of takes the fun out of trying to branch a comeback.

With most racing games, the advantage of regaining the lead you lost is always an option. That option however seems lost with Mario Kart. All too often were we bombarded with ridiculously powerful item three times in a row, sometimes first by a red turtle shell, than a green one, and then lightning to top it off. The thrill of racing sometimes loses its appeal when you get pummeled so fast and quickly by the opposing AI characters and then fall into last without any chance of catching up. This scenario happened four out of the five times we raced, so it isn't akin to only certain maps.

However, there are some new items and upgrades that make the items worthwhile to pick up and use if you happen to get the opportunity. Bullet Bill makes his first appearance on a Nintendo console (minus the handheld versions), which lets you assume the role of the flying bomb and crash through any players in front of you, ultimately materializing on the course wherever you end up. Bob-ombs can explode in a huge blast radius and now blue turtle shells target only the first place player and act like a giant bomb that gets dropped on top of you. These three items are probably the most fun and powerful to use in the game, and they appear quite often, making it both exciting and wary to all drivers.

The maps in Mario Kart are fun to peruse over in the menus, but after racing through some of them you have to wonder where the innovation and imaginative ideas Nintendo is known for has gone. Many of the maps are recycled levels from previous games, and others are just re-invented courses with different names to make you think they are new, such as Waluigi Arena. There are a few cool tracks, such as one where you race through a giant factory or a mini mall, but the wide diverse track setups you have once known and loved from previous titles is gone, and unlocking the better and newer maps requires time and lots of endurance.

The visuals themselves look up to par with Wii's standards, but compared to the other stellar Mario title, Galaxy, it pales in comparison. The character models in particular are pretty bad, with blocky layouts in the menu and vehicle changes that hardly look different at all. Many of the explosions caused by items look out of place during races and only the new maps tend to look like true Mario Kart courses. The latter section of tracks usually fall under the category of rehashed visuals or water-enhanced tracks, which sad to say is about one half of all the courses in the game.

The multiplayer modes are probably the best aspects of Mario Kart, and it is here that you do not have to worry about the item bombarding or the rubber band AI. Up to four people can participate in split-screen races and a total of up to 12 online. The online matches had surprisingly little or no lag at all and races were fluid more or less throughout the entire race. Players can hook up with friends or join quick matches against random people, all the while engaging in either closed circuit races or battle modes. The races are designed to be fun for everyone, so you will be placed accordingly to race against players with your same skill setting and in the closet region to you. This move helps get rid of alienation from the more hardcore players. There is also a new Mario Kart Channel, which lets you use your Miis to compete in tournaments or just interact with other players. The tournaments usually consist of races against other players for prizes, although Nintendo hasn't officially revealed what you win during these tournaments.

While online play is definitely the best new aspect of Mario Kart, there is still plenty of fun to have if you don't have access to Wi-Fi. The battle and coin modes are still around, having players duke it out to achieve the highest possible scores. Battle mode has players grabbing items to pop balloons situated on the back of each person's kart, with the team with the most balloon pops at the end being declared the winner. The coin battle mode plays out ultimately the same but player's race around the track to collect coins, which can then be stripped from opposing players by hitting them or knocking them into obstacles. Although the battle modes are fun match-ups and usually involve lots of mayhem and fun, they have now been reduced to only team-based affairs, making the term "every man for himself" a thing of the past. Plus there is no option to turn off the timer (game's only last three minutes) and with only five maps available, the options are pretty slim for these two modes. They are still tons of fun, but a little more diversity in both management and levels would have been welcome.

With Mario Kart being the epitome of racing franchises for many years, it is sad to see how little the game changes its dry formula and actually takes several leisurely steps at addressing failing issues. The use of super-powerful items is abnormally constant throughout the game, and the AI's ability to regain the lead after being lapped is a huge downfall in terms of playability. The multiplayer modes are still the best bang for your buck, offering nonstop racing action and battles, but the lack of a sophisticated single player mode leaves this Mario Kart title stuck in the pits.
Review Page Hits: 0 today (648 total)
mediahook