A great group really starts to flex its muscle. 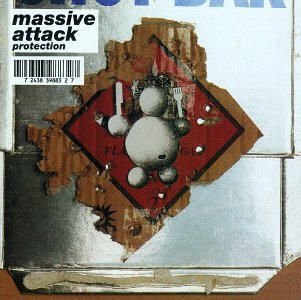 First of all, if you are a fan of Everything But The Girl or Tracy Thorn, just go buy this album. Protection is arguably her best vocal work. This is a memorable LP that probably deserves its classic status. On the other hand, Protection can be overrated in some circles, and does suffer from a couple of weak tracks. Still, this is one of Massive Attack's best efforts, and that actually does say a lot. It also represents an evolution from Blue Lines. If you are looking for a first CD to check out to experience trip hop, this is the one I'd recommend. It's both accessible anough (on a first or third listen) to draw you in and complex enough to satisfy you for the long haul (like me, years later).

Track-by-track Review
1) Protection - Protection does not waste time. The title track is one of the best. I challenge you to find a better song with Tracy Thorn singing on it. (Not counting this album. LOL.) Protection is heartbreaking and practically spiritual. This song sort of laid the framework for the whole "trippy beats with chick singing" genre.

2) Karmacoma - A fine example of why this album is a great first trip hop purchase. This song is super-accessible. Tricky and the rest lay down some pretty funky raps. In fact this is all but a Tricky song, and he covers this track himself on his own first CD release. As you get further into the album this song may lose some of its appeal, but it's a strong bet to be one of your faves the first time through. The rap is particularly strong.

3) Three - A strong vocal track, but not one of the strongest on the CD, is provided by Nicollette. Though not a high point of the album, it does serve a purpose to bring you back down after Karmacoma, which pumps you a bit. It's a nice song, but not very memorable.

4) Weather Storm - An instrumental track that, in my opinion, is not especially memorable. Still, if you are looking for background music and lyrics burn you, this is worth a couple listens.

5) Spying Glass - This track is reggae influenced. Spying Glass is also pretty complex musically and tends to not play well on first listen. Because of its complexity, it ages well though. It's one of those songs you are likely to dismiss the first time through, but then you find yourself coming back to it a month later.

6) Better Things - Like depressing music? Looking for a song after a break up? This is the single best track on the CD. From the lyrics "Don't drag me down, just because you're down," to Thorn's practically spit proclamation that "You say the magic's gone, well I'm not a magician. You say the spark is dead, well get an electrician. Save your line about needing to be free. That's bullsh_t, baby, you just want rid of me," this is one of the best breakup songs of all time. Better Things is haunting and captivating for all the right reasons. There are not enough good things I can say about this song. It is incredible that such a powerful song can be so short and simple, and it is a testament to Thorn's voice.

7) Eurochild - This is one of the catchiest of the Massive Attack rap songs. Tricky in particular really shines. This is another of the strongest tracks on the CD. Massive Attack really hit the nail here with the sound that they later perfected. The sort of danceable, yet incredibly menacing, hair-raising beat is definitely here. Though Eurochild doesn't dwell on that element like some of the songs on Mezzanine; it uses it more as a tonal note. As a result, in many ways I prefer it. Along with the track before, this is a must listen.

8) Sly - Nicolette returns with a fragile, complex song. For some reason this song has a sort of smoky flavor that old jazz tunes had. Think Billy Holliday in the 90's and you are on the right track. Again, it's a high point, but not necessarily as accessible as the previous two
.
9) Heat Miser - Another instrumental track, but not as good as Weather Storm, if you ask me. This one is more repetitive.

10) Light My Fire - This is by far the worst track on this CD. If you are downloading the CD just skip it. It is unbelievable that it was included; Light My Fire is a horrible, horrible failure. Avoid. It actually brings the whole experience down a notch. I thought it was a joke the first time I listened. It's atonal and poorly recorded. Bizarre.

There you have it. Those who prefer ballads will find this to be Massive Attack's best CD. On the other hand, it was in many ways just a table setting for Mezzanine. Less a revolution than Blue Lines, this CD simply shows a band on its steady evolution to the top of its form. Still, this is widely considered one of the more influential electronic albums of the 90's by many critics. This particular CD was later remixed into the decent but, I think, overrated "No Protection." No Protection is more sonically complex, but loses most of the vocals which, to me, are important.
Review Page Hits: 0 today (193 total)
mediahook