The RPG and Puzzle genres come together in one of the most addicting games for the Nintendo DS. 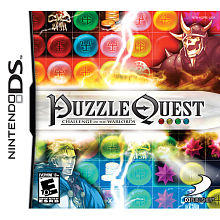 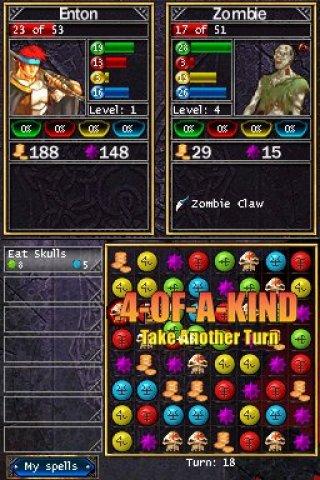 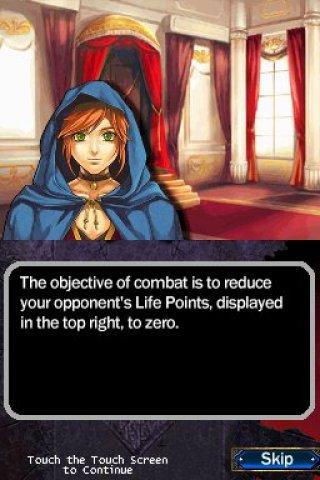 While the merging of different genres has become an increasing trend in video games lately, the RPG/Puzzle amalgamation that is Puzzle Quest: Challenge of the Warlords is still a particular title to play. Conventional RPG elements have been applied to Puzzle gameplay similar to PopCap Games' Bejewled to create a game that feels familiar and unique at the same time. More importantly, the result is both entertaining and addictive.

Just how addicting Puzzle Quest is examplifies why these two genres work well together: the puzzle aspect is simple and easy to get into, while the RPG characteristics adds depth to the game's strategy. Players assume the role of a Druid, Knight, Warrior, or Wizard and battles the computer (or another player) by manipulating the position of different tiles in an 8x8 grid. By switching the place of two adjacent tiles, players must align three to five tiles of the same type in order to activate them. Activated tiles can deal direct damage to the enemy, give players a small experience boost, add to their gold count, or build mana supplies. These mana supplies are used to cast spells, attack the opposing player, aid your own character, or influence the tiles on the grid. Once tiles are activated, they are removed from the board; tiles above the ones removed drop down to fill in the gaps and random tiles fall from the top to fill in the missing spaces.

This aspect of the game can be extremely frustrating. Falling tiles can create chain effects and while you can forsee where the tiles already on the grid will fall, there is no indication as to what new tiles to expect from the top. Often, the falling tiles will set up big plays for your opponent to no fault of your own. Likewise, a seemingly harmless, simple play by your opponent can lead to big chains that does direct damage to you, fills up their mana reserves, or both. Granted, this randomess can and does work in your favor as well, but in a puzzle game that requires a good amount of strategy, big, battle-altering plays brought about by luck and haphazardness feels cheap.

Thankfully, the high amount of character customization in the game can help you recover from these big plays and take over a battle. It's common RPG fair: each character class has their own strengths, weaknesses, attacks, and spells. Winning battles nets experience which leads to higher levels, more health, raised stats, etc. Weapons and other items can be equipped to upgrade characters' attacks, spells, and defense, and can also strengthen the effects of the tiles on the board. You can also make friends with some characters and capture enemy beasts in quest mode to aid you in your fight.

Quest mode can be described just like the gameplay can: simple, yet deep. With hundreds of quests to choose from, it will take a good chunk of hours to complete just half of them. However, being simple in this case isn't a good thing. The story of a peaceful kingdom brought to war by the rising of the undead and other monsters is told entirely through backdrops and character busts that pop up for conversations. There is a lot of reading, and very, very little animation. Traveling in the game is done by clicking on a location; instead of surveying the scene once you get there, you choose applicable options from a menu. The only screens you get are the world map, the battle screen, and the backdrops during conversations. To be fair, this is a puzzle game first - the RPG elements are really the secondary nature of this game. Still, the presentation of this nature feels tacked on and there is no excuse for that.

Really though, the game as a whole is poorly presented. The character art looks cheap and generic and there isn't anything to the battle screen outside of what is necessary. As mentioned, there is very little animation in the game: outside of a blurry figure walking to and from different places on a map, the falling tiles in battle, and the occasional special effect from attacks and spells, there isn't anything that moves. There isn't much to the sound. As an overall package, it's much more limited than the game's visuals, but the music isn't grating or distracting, so it at least doesn't take away from the experience.

The visuals really don't take away from the experience either; it's just a shame that it along with the auido doesn't add to the experience. Still, Puzzle Quest: Challenge of the Warlords is a highly enjoyable game, one of the most fun titles on the Nintendo DS. Though easy to play, the array of enemies and quests present different challenges and variables to consider, and thus the need to learn and utilize different strategies. This keeps the "Puzzle" half of Puzzle Quest fun and fresh; unfortunately, the same can't be said about the "Quest" half, but that shouldn't stop you from playing it again and again and again.
Review Page Hits: 0 today (52 total)
mediahook