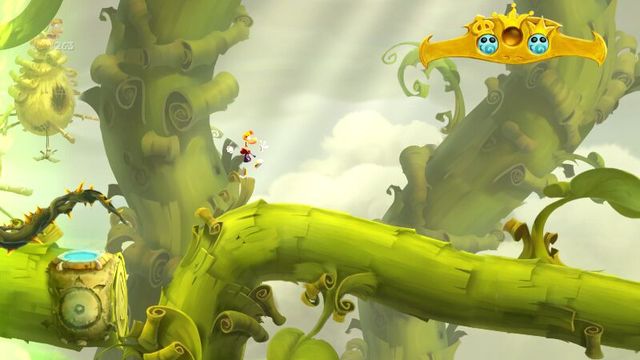 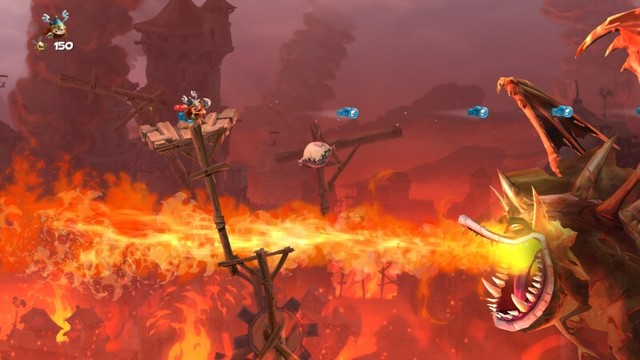 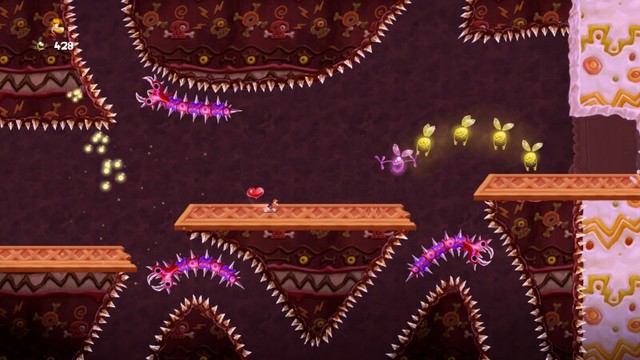 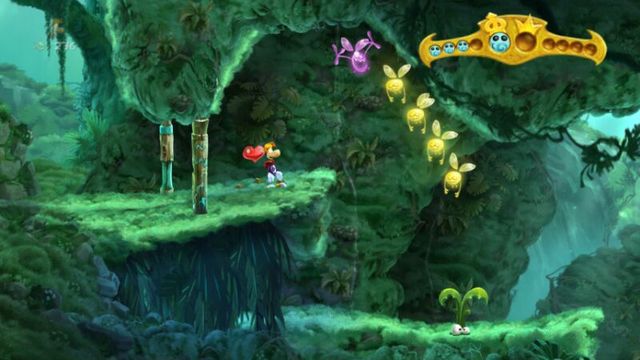 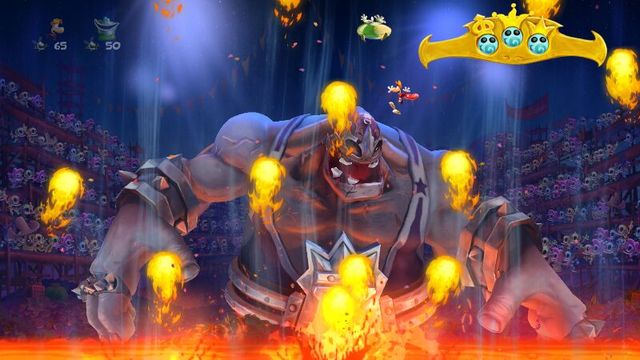 Originally planned to be a Wii U exclusive, Rayman Legends was delayed from its late February release date and given an August (for Europe) and September (for North America) one. The purpose of this delay was to make the game multiplatform. This decision was made after Ubisoft's biggest exclusive launch title for the Wii U, ZombiU, sold horribly to the system's user base. Whether or not that decision was smart is up in the air. Regardless, as a lover of platformers, I finally got my hands on Rayman Legends, and it certainly lived up to my personal hype.

As a 2D platformer, Rayman Legends doesn't bog down the experience with a heavy-handed story. No, the game's plot is very simple. Blue characters known as Teensies have been kidnapped by a group of creatures known as the Nightmares. Murfy is called upon to wake Rayman, Globox, and the others out of their usual sleeping routine to save all of the Teensies across five main worlds.

Rather than have a world map like in Rayman Origins, Rayman Legends has a series of rooms that house a plethora of paintings that Rayman can leap into. As more and more Teensies are saved, more paintings open up. You need not go in order of levels as long as you recover enough Teensies, as worlds and their levels are unlocked by how many Teensies you have.

Rayman Legends constantly throws new gameplay styles, mechanics, and challenges at the player. One level you'll be floating in the wind while shooting down enemies, another you'll be running from a rampaging luchadore, and then there's a level where you'll swim stealthily through the water, dodging the trap lasers and lights that wish to cook Rayman's goose.

At the end of the each world is a seriously fun boss battle. The combination of platforming, evading and taking down each boss makes for an insanely good time. After each boss, there is a musical level. What these include are dynamic songs that perfectly sync with your platforming. The first level, Castle Rock, uses a Rayman-ified cover of Black Betty that has enemies popping their heads out on cue with the music. They're glorious and highly creative levels that are an absolute blast to play.

In addition to the all-new levels, which there are certainly plenty, by scratching Lucky Tickets you can unlock many classic Rayman Origins levels recreated in the Legends graphical style. Not all levels make a return, but the majority of them do.

Each level, both new and from Origins, contains an amount of Teensies that are ordinarily well hidden throughout. The majority of Rayman Legends's levels contain ten Teensies to find, two of which are found in bonus rooms. These bonus rooms contain a type of platforming challenge that you need to survive to obtain the Teensie in question. As stated, the more Teensies you save, the more levels you unlock. (There are 700 Teensies total.)

Legends is an overall easier game than its predecessor, Rayman Origins. Part of this is due to the abundance of checkpoints that the game gives you. In Origins, checkpoints would generally only come from entering doorways. In Legends, checkpoints come after almost every obstacle. Additionally, after successfully completing a bonus room, the Teensie you rescued will give you a heart (i.e. an extra hit to take). These are great alterations for beginning players to have a more accessible game to enjoy, but veteran players might feel like the game's difficulty is too dumbed down in comparison to Origins.

That's not to say all of Rayman Legends is a cakewalk. No, no. There are some later levels that will definitely have your palms sweating profusely. Add in Invasion levels (currently missing in the PlayStation Vita version, but they will be patched in for free), which have you making a mad dash through a hazard and enemy-filled obstacle course to save three Teensies before they are rocketed away, make for optional content that is truly challenging. I shouldn't forget about the last world, another optional task, that features 8-bit versions of the game's musical levels. Though, these are sometimes hard for all the wrong reasons. I won't spoil any more.

Perhaps the most asked about feature of Rayman Legends is the Murfy levels of gameplay. Obviously, the game and these levels were built with the Wii U GamePad in mind. If playing by your lonesome, you control Murfy, interacting with objects to allow the AI player to progress. These are things like switches, levers, tilting the controller to move platforms or entire rooms around, and so forth. In the beginning levels, the AI is pretty smart. Later levels will have you getting frustrated until you realize the intended path the AI will always take. Unlike a human player, the AI doesn't do much in the way of platforming improvisation. It has a set intelligence for certain sections of the game, and if you don't follow its logic, you will make the AI die. In cooperative play, which for the Wii U version supports five players, one player uses the Wii U GamePad to control Murfy and interact with the scenery while the other players go through the levels normally.

The ports of the Wii U version behave differently. In the Murfy levels, you are in control of both the character and Murfy. Murfy will come across objects automatically, and all you have to do is press a button to activate them. It's definitely not as fun as the Wii U version, but if you're playing the game solo, it might be a preferred method of play. Ultimately, for the (subjectively) best single-player experience, I would go with the PlayStation 3 and Xbox 360 versions, while cooperative players should definitely invest in the Wii U version.

If you get tired of going through the campaign's levels, or you've taken the 10-15 hours to complete the game, there are always challenges to try out. Each day there is a new challenge to try out. Doing well in them rewards you with a trophy: either bronze, silver, gold, or platinum. However, you're always competing with the world. The top percentage of players earn a platinum, the next percentage a gold, and so on. This means that you could have earned a gold trophy during the afternoon only to get bumped to a silver trophy when other players beat your time or score for that given challenge. There are four unique challenges at any one time: a daily challenge, a weekly challenge, an expert daily challenge, and an expert weekly challenge.

Rayman and friends have a more floatiness (that's not a word, but work with me here) to their jumping. It's nowhere near as problematic as LittleBigPlanet, but it does take some getting used to. Unlike Rayman Origins, Rayman and company already have their whole move set unlocked from the get-go. All the wall jumps, slaps, and glides are their for your amusement and platforming prowess.

Rayman Legends is like a cartoon come to life. Rayman Origins had a bit of a flat feeling to it. Legends corrects that by having great contrast on characters via shading. Speaking of characters, they are incredibly expressive in both sight and sound. Levels are visual treats, too, offering a stunning amount of eye candy and beauty. This is all while running without a hint of slowdown. The music in Rayman Origins was phenomenal, and Christophe Heral delivers a sensational soundtrack yet again for Rayman Legends. There's tense tracks, happy-go-lucky tracks, and a great number of them are highly memorable.

Overall, Rayman Legends is without a doubt one of the better 2D platformers that has released in the past decade. Almost everything about it is coated with excellence and charm. The Murfy levels might not be everyone's personal preference, but they do work well the majority of the time. With Grand Theft Auto V and other big titles looming this fall and holiday season, it's a shame Rayman Legends will probably get overlooked. Still, if you're searching for a platformer that rivals and sometimes even surpasses Nintendo's New Super Mario Bros. U, then Rayman Legends will be a satisfying and worthwhile addition to your game library, regardless of which system you get it on.
Review Page Hits: 0 today (280 total)
mediahook