The hero of the Seiken Densetsu series, although different, remains unnamed but is ready to restore some Mana to the ailing world! 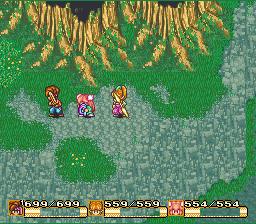 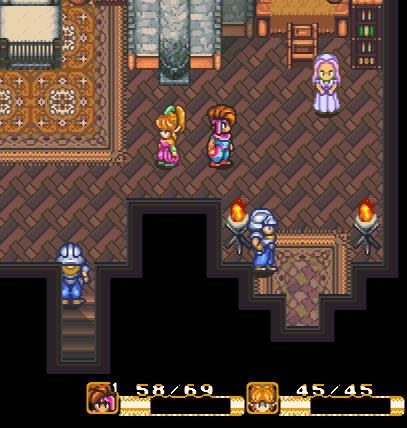 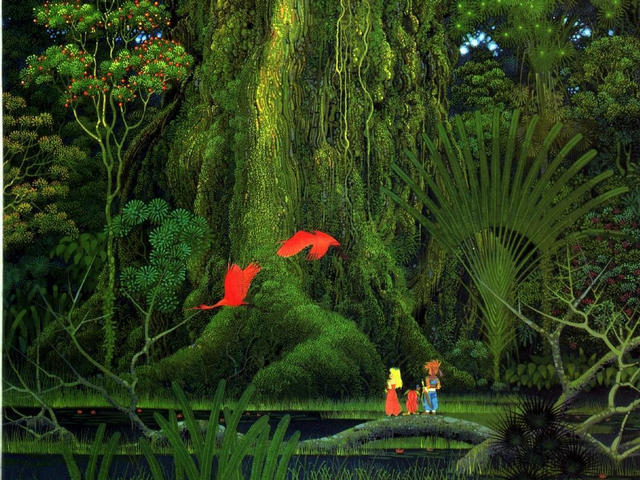 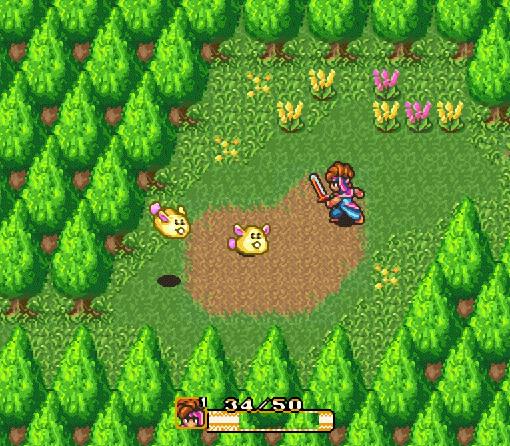 "Time flows like a river. History repeats." Although only those that took the time to watch the introduction are probably familiar with this line, everyone that has played this game wishes that history would repeat and bring us pure entertainment and bliss in the form of a RPG as Secret of Mana did.

Secret of Mana, part of the Seiken Densetsu series in Japan, is actually the second game in the series. It is the sequel to the Gameboy game, Seiken Densetsu (released in North America as Final Fantasy Adventure). Mixing Legend of Zelda-esque action and the traditional RPG elements of leveling up, this is one mixture you don't want to miss.

Secret of Mana has a nice little plot that starts off shallow but deepen as the game goes on. First set in a nice, peaceful forest village, the hero of the story slips and falls off a huge log while hanging out with his "friends" and stumbles upon a rusty sword plunged into a stone. He pulls the sword out of the stone in hopes of using it to cut through the foliage blocking the way to his village, followed with the appearance of a ghostly figure . With this simple act, he unknowingly disrupts the balance of Mana around the village, causing "hostile" (one type being rabbitlike) creatures to appear. Because of this, he is cast out of his village and must journey through the land, finding the many Mana Seeds to once again restore balance not only to his village, but the world.

What power is hidden beneath the rusty exterior of the sword? Who was the ghostly figure? What is Mana?! These questions and many more which will arise as the game goes on. These will plague your mind and tug at your curiousity, consuming your sleep time and putting your food consumption on hold. The story also has its shares of plot twists, but I'll leave it to you to find out what they are.

The graphics found in this game are done quite nicely. The character models are better than sprites, but many of the regular enemies face are not exactly what I'd call intimidating, especially the Rabites. The bosses on the other hand look great, but some later bosses look exactly like previous ones despite color changes. Sometimes the surroundings may seem plain, but there are moments when they look really breathtaking, like when your party is looking over a cliff and gazing down at the Mana Tree.

In terms of music, the score is great. The music for each place fits well, some being really upbeat to the point of annoyance and others nice and soothing. I especially like the music found in Mana temples that have previously been visited and "conquered."

The sound effects are okay. The sound of your weapons hitting enemies makes a raspy slapping sound and something close to water slapping against something when an enemy is vanquished.

The controls are nice and simple, nothing really that hard to grasp. The menus are arranged in a ring interface and are easily maneuverable. Nothing much else to say about controls.

Secret of Mana has a real time combat engine, allowing you to kill enemies before you get in their attacking range. Choosing a weapon is kind of important during combat, as certain weapons are more effective against specific enemies. Same goes for magic (d'uh), new spells only to be gotten after killing bosses and/or meeting certain people. It's also great that you are able to level up your weapons and magic the more enemies you kill and the more they are used. Not only that but by taking your weapons and its specific weapon Orb (which can be found in treasure chests left by enemies) to Watts, it can evolve to its next form.

Secret of Mana is already fun to play by yourself, but even more with two more friends. That's right, Secret of Mana is a multiplayer RPG, up to 3 players. Not having to worry about enemies attacking you from behind is a relief and just chilling with friends is great. Of course, it may get frustrating at times as you can't move anywhere if a player is stuck behind a rock on the other side of the screen or your friend isn't casting the spells quick enough.

One thing that was annoying is the fact that when you cast magic, especially during boss fights, you can keep re-casting a spell over and over, allowing the damage to pile up. This makes many of the boss fights quite easy. Luckily, it can't be done on all of the boss fights.

Once you beat this game, there are no extra endings to unlock. If you want, you can play through again and level up every single weapon, find orbs to evolve all the weapons to their final form and level up every spell. Other than that, there's not really much to do except put it away, play other games, and re-play after a few months. By then, it'll be almost as good as the first time you played it.

Good story, tight visuals and sounds, great real time combat and multiplayer action to tie it altogether, there's not much wrong with this title. Actually there is: it's pretty hard to find and a little on the expensive side, but what price can you put on having a great time?