Space Harrier is an excellent arcade game that is simple, but very fun. Sega 32X received a near-perfect port. Memories of playing this in the arcade back in 1985 may overwhelm some players. 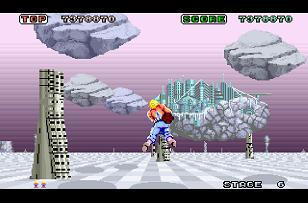 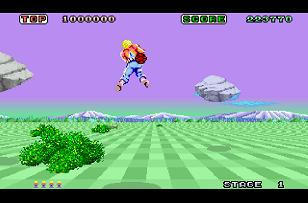 Space Harrier is a one-of-a-kind experience where you play as Harrier, a soldier with a Super-Power Cannon and the ability to hover several feet off the ground. Any video game enthusiast who visited an arcade in the mid-80's surely has played this landmark title. Released for the Sega 32X around the same time as After Burner in 1994, fans of these two fast-paced old arcade titles were pleased to receive excellent console conversions on the Sega 32X. Unfortunately, many other 32X owners were unimpressed and confused as to why Sega was releasing ports of old arcade games for their newest console. Although it remains a mystery why Sega did not take the extra step to produce Space Harrier III for 32X (Space Harrier II was released for Sega Genesis), what 32X owners did receive here is solid through and through.

The game play is extremely simple in theory, but it is addictive and the player needs to respond to events quickly. There are only two actions the player can control - moving around and shooting. If Harrier is close enough to the ground, he will run instead of fly. Given a back view of Harrier, one uses the control pad to move up in the air, down towards the ground, left in the air/on the ground, or right in the air/on the ground. Harrier automatically moves forward to progress through the level. The player can use any button to fire an energy pulse from Harrier's cannon. The game is divided into 18 different levels, with two of those being bonus stages. Populating the levels are spaceships, robots, dragons, one-eyed elephant-like creatures, and other odd creatures. These creatures will do anything to destroy you (most of the time they will try to shoot you). The bonus stages put Harrier on a "Dragon of Justice" named Uriah and together they destroy as many obstacles as possible for bonus points. These two bonus stages are actually quite unimpressive and not all that fun, they merely serve as a break from the normal hectic game play. While I was playing I found that most of my deaths were not from enemy fire, but from collisions with obstacles on the ground. There are trees, mushrooms, poles, and other objects that appear frequently. While shooting the enemies and avoiding their shots, I often ran into a tree or pole. The combination of creatures and obstacles forces the player to have lightning quick reflexes in order to master the game.

The graphics are very good, but the graphical style by the game's designers is what makes the visuals great. Everything is very colorful, and when combined with the fast in-game movement, it can blow the player away. It looks almost exactly like the arcade version, except for some slowdown in the later levels where there are many enemies on the screen at one time. The slowdown does not hinder game play, and is really nothing more than a minor observation. One can assume that if this game had been ported to Genesis instead of 32X, the colors would not have been as vibrant. Thank you Sega.

The sound is perfect. The 32X version emulates the arcade's sounds 100%. Anyone who played Space Harrier as a child or teenager in the mid-80's may be overwhelmed with nostalgia when they hear the classic "You're doing great" after each level or the "Get Ready!" line. The music remains as well. The main theme can simply be described as a weird techno synthesized adventure theme (simple description, right?). It is one of the best video game themes I have ever heard. It matches the sci-fi atmosphere of the game perfectly, and it sure is catchy. As in the arcade version, the music changes for each boss. Each of these themes remain faithful to the arcade version as well.

Space Harrier is an arcade classic, and the 32X version emulates the arcade version almost perfectly. Yes, Sega ported a game that was almost 10 years old at the time for a new console, and this may have confused consumers as to what exactly Sega was trying to accomplish. But the game is simple, fun, addictive, and it was revolutionary back in 1985. This title screams nostalgia. This title rocks.
Review Page Hits: 0 today (64 total)
mediahook