Ever wanted to do a swan dive off the Empire State Building? Well now you can! 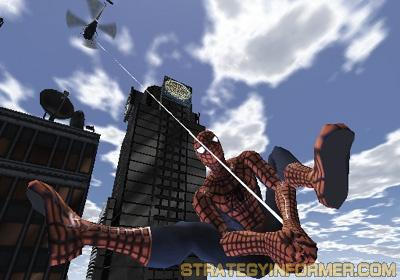 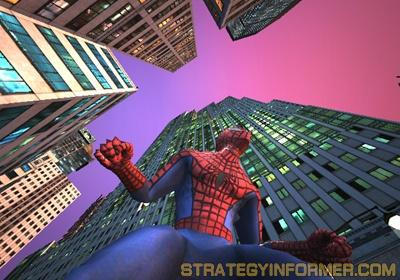 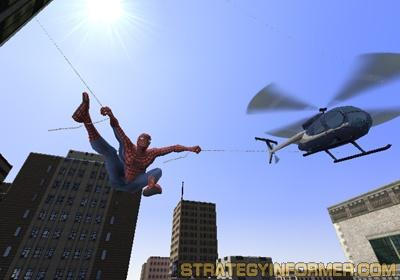 Spiderman 2 is based on the recent box office hit. For those of you who have played the previous 3D Spiderman games, you will notice plenty of key differences that I think you will enjoy.

Plot
Although it strays from the movie quite a bit it still keeps the basic plot line. Peter Parker is questioning his life and wondering if it is really worth it to be Spiderman. Peter must figure out his life while trying his best to protect the city from everything from Car Jackers to super villains such as Rhino, Mysterio, The Shocker, and of course, Doc Ock.

This is Spiderman 2's strongest point. The game play is simply awesome. The most important change in the game play is that you can actually go from city roof tops to the streets and back up again without load times. This gives you the feeling of being Spiderman. It doesn't matter if you are doing a swan dive off the Empire State Building or you are about to pile drive a purse snatcher from 30 stories up you will enjoy yourself in this game. Even after I have beaten the game I am still having fun simply from exploring the skyline of New York City. If you enjoy action games, then you will have trouble getting bored with this game.

This tends to be a different experience depending on which system you are playing it on, but on the Gamecube, the only problem with the sound is often times the voices will get jumbled together. For example, a citizen will scream for help and a bad guy will threaten Spiderman at the same time, causing the two voices to jumble together which sounds like a bunch of gibberish. Other than that though, there is some cool background music and lots of fun sounds trademarked to Spiderman, like web shooting or the sound of a car jacker being slammed into the side of a building.

The only real problem I had with the graphics were the character models. The characters look great when you are swinging past them at high speeds, but when you have to look at them up close they get ugly. Mary Jane looks so ugly in this game that I would even go so far as to compare her to N64 characters. Even Spiderman has paw-like hands like he did back in the PS1 days.

However, where the character models lack, the environment picks up. New York City is absolutely beautiful in this game. If you want a great example of this try making your way up to the top of the Empire State Building and looking down at sunset. It's true that not all of New York is included and some landmarks have been left out but the things that are included are just plain amazing. It really saved the graphic rating for this game.

If you are just looking for the story out of this game you might be a little disappointed. The story moves very quickly and will probably only last you about 10 hours. But that doesn't mean there isn't more to do. There are over 150 challenges in the entire city and that's not the mention the part time pizza delivery job Peter has or the Mary Jane side quest missions or even the Daily Bugle missions. And if you don't want to do any of those you could always just look for crimes and protect the city. Even simply swinging around the city will keep you entertained. This game will definitely keep you playing long after beating it.

Learning Curve
The new swinging might be tough to get used to at first but they offer plenty of tutorials and helpful tips. Not to mention you can select if you want to play with a less complicated version of swinging but if you want the most fun out of this game I suggest you just suck it up and try to learn the new swinging moves.
Review Page Hits: 0 today (201 total)
mediahook