Amazon The Stand
Bookreporter.com The Stand

The Stand sets the stage for a grand battle between good and evil during an apocalyptic pandemic that could very well happen. 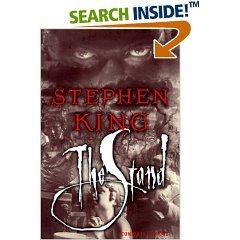 Many Stephen King fans, including myself, believe The Stand to be his best work. This novel was first published in 1978 but the content and disaster depicted in it could very well happen today.

I remember when I first read this book, I was a teenager in high school and I am certain I had better things to do with my time than spend it reading a book this size. But that did not matter; I could not put it down. I was sucked into this horrific, yet entertaining story that the grand master Stephen King had created.

I will try to explain what the book is about without giving too much away. The Stand begins with a deadly virus being accidentally released from a government compound. Before this toxic bug can be contained, a panic stricken security guard grabs his family and takes off across the country. Of course when he does this, he ends up spreading this disease, and before too long the U.S. is in the clutches of a pandemic. This super flu is 100% fatal when caught and a large portion of the population ends up dying from it. Another name that it is given in the book is "Captain Trips."

The survivors band together into two separate groups. The first is lead by an elderly lady known as Mother Abigal and she is very much in touch with her spiritual side. They are more or less represented as "the good guys." The other group is lead by Randal Flagg, A.K.A. "The Darkman." You get the impression that he is the Devil incarnate who brings together a group of people who tend to gravitate towards the darkness.

The story climaxes when these two groups finally meet. The ultimate showdown takes place, and you will have to read the book to find out who wins. The title of this novel comes from this confrontation, making your "Stand."

The world has changed a great deal since 1978. But unfortunately the possibility of a pandemic like this happening is even more possible in today's world.

This book, like so many other Stephen King books, was made into a mini-tv series in 1993. It starred Rob Lowe, Molly Ringwald, and Gary Senise.

This novel is a classic masterpiece and it is worth taking the time to read.