From a long, long time ago and a galaxy far, far away comes the best Star Wars game ever made 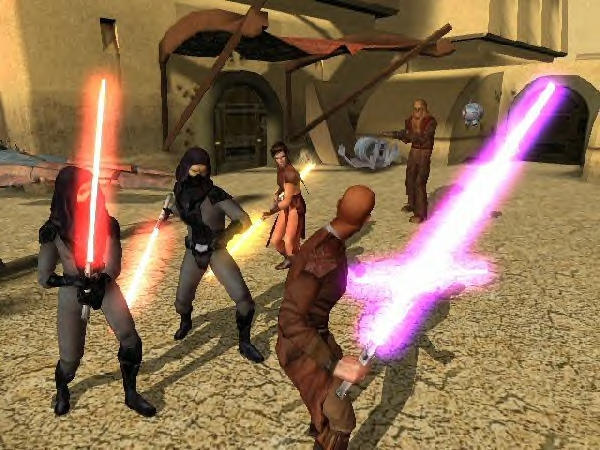 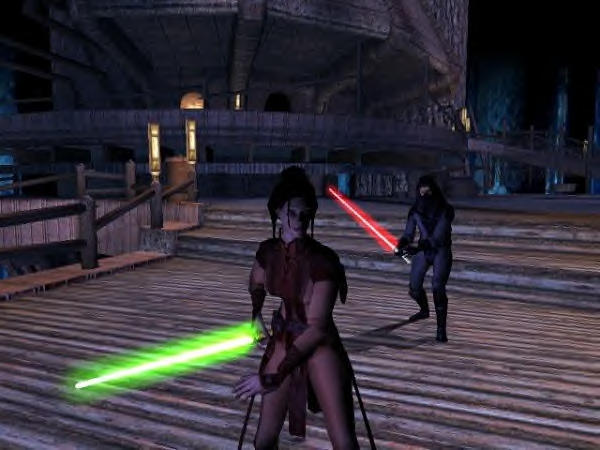 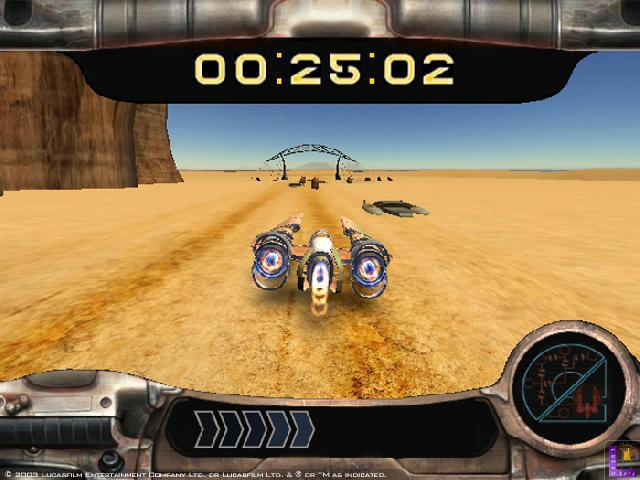 Everyone knows the hit and miss history of the Star Wars video games. For every Rouge Squadron there are ten games like Star Wars: Obi-Wan. The Star Wars name on a game has become a joke to many people. No longer, my friends. Lucasarts and BioWare have released the definitive Star Wars title. A title in which the player is not tied to Luke Skywalker as he fights the evil Empire, but in which the player must choose: walk the right path or embrace the darkness within.

Set 4000 years before the formation of the Galactic Empire, Knights of the Old Republic throws the player into the middle of the war between the Republic and the Sith. The player takes the role of a Republic soldier aboard the doomed ship Endor Spire. After the player and another soldier crash land on the urban world of Taris, the journey to save the universe... or destroy it begins. The player must rescue the missing Jedi Bastila, who also escaped the Spire, and escape the Sith blockade around Taris. Upon finding Bastila, the player learns that he or she is "Force Sensitive," or attuned to the Force, a rare find in someone outside of the Jedi Order. Once the group finds a way off of Taris, they make for the planet of Dantooine, to seek the wisdom of the Jedi Council there. Here the player learns that he or she have some kind of tie to Bastila. With this knowledge, the Jedi Council chooses to train the player in the arts of the Jedi. Once fully trained, the player and Bastila must set out together to discover the source of the Sith's power and destroy it. As Jedi Master Vandar tells the player, "The fate of the galaxy is in your hands." It truly is. Will you choose to follow the path of the Light and end the threat of the Sith? Or will you succumb to the Dark Side and use that threat to destroy the galaxy?

BioWare designed this game beautifully. Rather than force you down the path of good that Luke Skywalker followed, like many of the games, you choose what path to follow. If the player's character is evil, it isn't because the character was written that way, the player made them that way. The player has to take responsibility. Should the player follow the path of light and purity and be a great hero like Luke, Yoda, or Obi-Wan.... or follow the quick and easy path of the Dark Side and dominate the wills of the galaxy like Vader?

What path the main character follows through the game is decided by what choices the player makes. A good example comes extremely early in the game. Two bounty hunters are harassing and old man for money. The player has several choices. The player can ask the bounty hunters why they are attacking the man or simply ignore them. If the player chooses to ask the bounty hunters and ultimately defend the man, the player must choose rather to help the man with his debt and give him some credits OR attempt to rob the man themselves or even kill him. It is clear what choices here are good for what the game calls Light Side points and Dark Side points. The player earns Light Side points for doing tasks and making choices that would fall in line with the ideals of the Jedi Order. Dark Side points are earned by making choices that Anakin Skywalker obviously would have made on his way to becoming Darth Vader.

Now, don't think that the game is so shallow to leave it there. Many people would think "Whats the big deal? Light Side, Dark Side, it all ends the same and plays the same, right?" WRONG! The first thing affected is the gameplay. Once the player becomes a Jedi, they begin being able to select Jedi powers. If the player has followed the Light Side, it will take less force concentration, or Force Points, to peform Light Side powers such as Heal, Force Persuade, and Disable Droid. However, a player that follows the Dark Side will be able to perform powers such as Kill, Dominate Mind, and (Palpatine's favorite) Force Storm easier. Aside from that, there are two distinctive endings: one for the Light Side, one for the Dark Side.

The game doesn't just revolve around the character however. There are up to nine companion characters to have in your party (I say UP to nine because there are some choices that the player can make in the game that might prevent from having all characters avaliable, but I will leave that for the player to figure out). Each character has an interesting backstory for the player to dive into, leading to a sidequest for each. For one character, the player must help them reconcile with their mother. Another, the player must help find their long lost son. Depending on dialog choices and the sex of the player's character, a love story may develop between the player and a couple members of the group. As I said, this is an extremely deep game. All of this unravels over a series of six planets. The player will travel to the desert planet of Tatooine; the lush forest world of Kashyyyk, home of the wookies (the first time this planet has been seen since the Star Wars Christmas Special of 1977); the water world of Manaan; the volcanic Korriban, home of the Sith; and of course Dantooine and Taris. Also, for those who have Xbox Live, the planet of Yavin is opened up for those with a lot of credits and the urge to spend them. There may be other planets and/or locations out there, but I will again leave those for the player to discover.

The planets lead me to one of the game's biggest flaws. All of the planets and surroundings look great. The landscapes are awe inspiring. However, the player characters and non-playable characters are less so. One thing that got on my nerves is the lack of faces. After playing the game for awhile, I noticed that many of the characters just simply used the same face design without change, especially the female characters. I know most of the detail is supposed to go to the actualy playable group, but I feel more time could have been taken on the NPCs. Also, the general character appearances in some places were lackluster. Some places were graphics effects should have been present, like extra brightness from the sun on Tatooine, they just weren't there. Not a huge problem, but it could have been taken care of. Also, the characters seem blocky or sewn together in some places. Overall, however, it looks great. The character designs are fit for the purpose, the environments are beautiful, the lightsabers shine, and all is well in the end.

Fortunately, there are no problems at all with sound. Everyone has come to expect a lot from the Star Wars soundtracks. Knights of the Republic doesn't disappoint. The music is just as good as any that you would find in any of the movies. Possibly more important are the sound effects. Have no fear. The blaster shot burst, the clangs of swords, the exploding buildings and ships, and the whirr of the lightsaber all come through loud, clear, and crisp. To top it all off, the voice acting is superb. While not featuring the name talent of such games as the Grand Theft Auto series, Knights of the Old Republic features a cast that have voiced many video games and their experience shows. The voices really bring all of the characters to life. They show great emotion. Other than story, sound would probably be the biggest strength KOTOR has.

As great as KOTOR is, there is one gigantic, Rancor sized flaw to address. A game of this magnitude can be expected to have some bugs in it, but there are some full out glitches in this game. These should have been taken care of before the game was allowed to ship, but they were not so the player must deal with them. This is the only area that I would recommend the PC version over the Xbox version. On PC, patches have been released to take care many of these glitches. In the Xbox version, most of them can be avoided by using common sense. Many of them a player will never become aware of their exsistence. Some of them can be very destructive, however. Be advised: keep A LOT of save files (hey, you got to use all that HD space for something, right?). If you come across something that seems off or out of place, load from the last save file before the glitch showed itself. I know this may be tedious, but it can save a lot of trouble. On my play throughs, I have not run into any of the destructive glitches, but I know they exsist. Protect yourself from them.

Overall, I feel like this is a most own game. It has its share of flaws, but it is an extremely enjoyable game. If you are a Star Wars fan, you will be completely wrapped up in the story and thrill of actually becoming a Jedi. Even if you aren't that big of a Star Wars fan, you will find a fun D&D type game with a story you can follow. The characters are deep and you will care about them (most of them, anyway). There are beautiful sights and sounds to be seen and heard. Tie all this together with several mini-games including swoop racing and gun turret shooting, plot twists, and a lot of good laughs with the replay value of following the Light and Dark Side, you get one legendary game. Go buy this game. You know you want to walk the Light Side.... and finally find out what Vader meant when he said "If you only knew the power of the Dark Side."
Review Page Hits: 0 today (414 total)
mediahook