If you have a DS and want to see if this whole eBook thing is right for you before you buy a Kindle or a Nook, give 100 Classic Books a try. 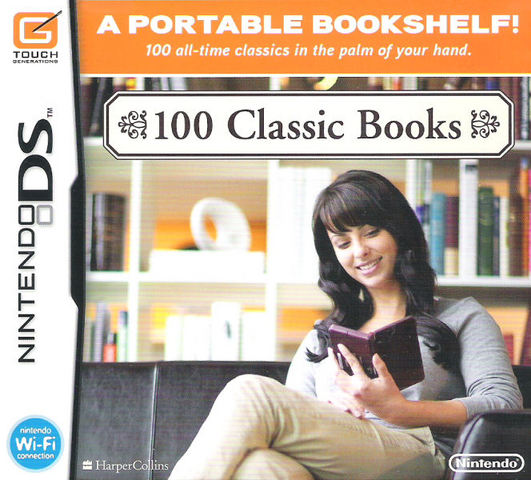 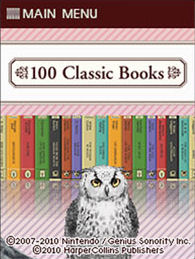 As an avid fan of words in general (of which one must certainly be a fan to write multiple reviews for GameTZ), I decided, upon learning of its existence, to purchase 100 Classic Books for the Nintendo DS.

First things first: all of the books included in the software are now out of copyright, so some people will invariably scoff at the idea of paying actual money for them, particularly since they can be had legally for free on places like gutenberg.org. This is certainly a valid point. My feelings on the matter are thus: I like to read, but I am not terribly fond of reading books on the computer. Had I an e-reader such as the http://www.amazon.com/kindle-store-ebooks-newspape...">Kindle or the Nook, there might be little reason for me to purchase a title such as this. However, decent e-readers are still relatively expensive (at the time of this writing, currently $189 and $149 for the base models of the Kindle and Nook, respectively - and then there's the cost of a cover or case to help protect the thing, and possibly the optional protection plan), and without having used one at any length, I'm not sure whether or not it would be worth it to me to drop the coin required for such a purchase.

Since I already have a DS, making a $20 purchase is a much easier pill to swallow in order to dip my toe in the waters of e-book reading.

When the title starts up, there is a pleasant and soothing tune playing, as an owl flies across a row of books and settles on the non-touch screen to watch you. The owl also serves another feature. If the thought of choosing what to read from the 100 books available is somewhat daunting, you can ask the owl for a recommendation. He'll ask you a few questions about what you want to read (length, genre, reading level, etc.) and make a suggestion based on your answers.

You can also get recommendations through the online rankings. Once you connect to the Nintendo WFC, you can update the rankings on the books, and there will be stickers applied to various books that are the highest rated in several categories (most romantic, most humorous, most scary, best overall book, etc.). This is a neat little feature, but wholly unnecessary, particularly since most people won't want to keep going online just to update the rankings again and again. Whilst connected to Nintendo WFC, you also have the option to download ten additional books to the software, which immediately integrate themselves into the bookshelf (there's a little "DL" on the bottom of the spine of each book so you can see which ones are hard-coded in the software and which are DLC).

You can recommend books yourself after you've finished reading them (or after you've skipped ahead to the last page and "finished" the book if you're just eager to give a high rating to your favorite book). You get to rate it from 1 to 10 and then pick an adjective that describes it (the adjectives correspond to the categories a book can be stickered in).

I've typed up a list of the books at the bottom of this review, and there is quite a large variety available across all genres, which is a plus. With authors ranging from Louisa May Alcott to Oscar Wilde, and the books themselves going from 20,000 Leagues Under the Sea to Wuthering Heights, there is literally something enjoyable here for practically anyone who even remotely likes to read.

The one big problem I had with the books is that there are sporadic typos to be found. As an example, there's a passage in The Jungle Book which erroneously says "hoys" instead of "boys" (on page 376 if you are using the standard font size). They're not everywhere, but I found a couple in the Jungle Book and elsewhere (I've only read a few books in the game). However, they are very off-putting when you find them, and it puts a bit of a taint on what is otherwise a very solid title.

As for the interface, it is so intuitive that practically anyone could figure it out within a matter of seconds. However, there's also a tutorial that plays the first time you start the game (which you can skip if you so desire). You hold the DS sideways (like a book - clever, no?), and you can use either the buttons or the screen to turn the page. The d-pad or face buttons (depending on whether you're a righty or lefty) can be used to turn the page left or right, and you can optionally set the shoulder buttons to change pages as well. On the screen itself, tapping the left or right side of the touch screen will turn the page back or forward. You can also slide the stylus across if you want a more "realistic" page-turning motion.

You can set up to three different bookmarks per book. This is nice if you have a particular passage that you want to refer to later, or if you have multiple people reading off one cartridge. If you want to remove a bookmark, just go to that page and take it out. Or you can simply place it somewhere else in the book and it will move automatically (you don't have to go and pick it up before you can set it down somewhere else, which is nice).

The font size can be changed between two settings, and I found both to be quite easy to read. There's also several background ambient noise choices you can use. Some of them are a little unpleasant (actually, both the music selections of "Classic" and "Easy Listening" sounded a little too harsh and synthesized for me to enjoy reading by), but I found some that were very relaxing and actually enhanced the reading experience ("Summer Night" is my favorite, but "Moving Train" and "Park" are both good too).

It's obvious that a lot of work went into making the interface as smooth and as intuitive as possible, and it really shows. It's extremely well thought out, though it's not perfect. One glaring omission is the lack of a dictionary to look up unfamiliar words (I understand that both the Nook and the Kindle have built-in dictionaries for just such a purpose). With all the books being from 1922 or prior, it is not uncommon to run into many unfamiliar words, particularly from the international authors such as Tolstoy, Kipling, or Hugo. Secondly, there's no search functionality. Unless you've bookmarked the page, you're stuck hopping from page to page looking for whatever phrase or quote you wanted to find. Another feature that would have been nice (though it isn't strictly necessary) is a text-to-speech feature. Synthesized speech has made many advances over the past decades, and although it's not perfect, it would be nice to be able to turn on a text-to-speech function if I wanted to listen to a book whilst browsing GameTZ, for example.

One of the other interesting things you might notice is a lack of an ESRB rating for this title. Apparently, due to the content being entirely literature-based, this title does not require any age classification. Granted it doesn't affect the software in any way, but it might be a bit of a collector's oddity for this reason.

So, as I mentioned at the top of the review, I basically purchased this as an experiment to see whether I would get any use out of an e-reader before I whip out the wallet and buy one. So how did the experiment go?

Well, it was down to the Nook or the Kindle, and I think I've finally decided on the Kindle.

And now, here's a list of books included with the software (Books with an asterisk are not on the cartridge, but are available for download via Nintendo WFC):

This list differs significantly from the 100 Classic Book Collection released in the UK. The UK version is a lot more focused on British Authors, and includes quite a few more titles from Jane Austen, the Brontë Sisters, Dickens, and Shakespeare. The US release has a wider variety of authors from many countries, although there is far less variety per author (Dickens and Shakespeare had some titles cut, but they're still fairly well represented).