Ace Combat 04 gets you as close to flying a real fighter jet as you'll probably ever get. There's nothing else like this on the PS2. 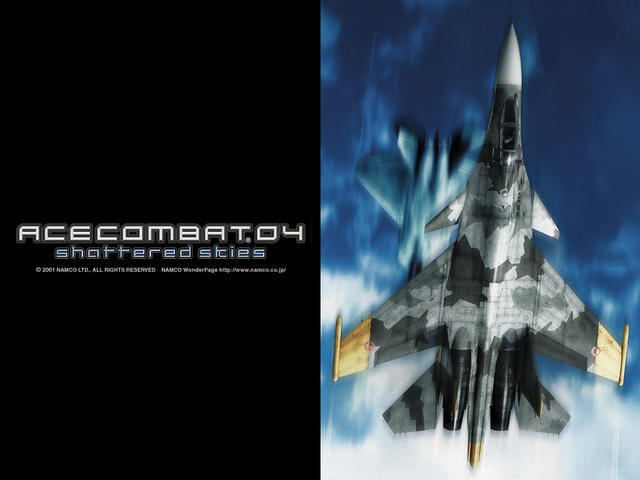 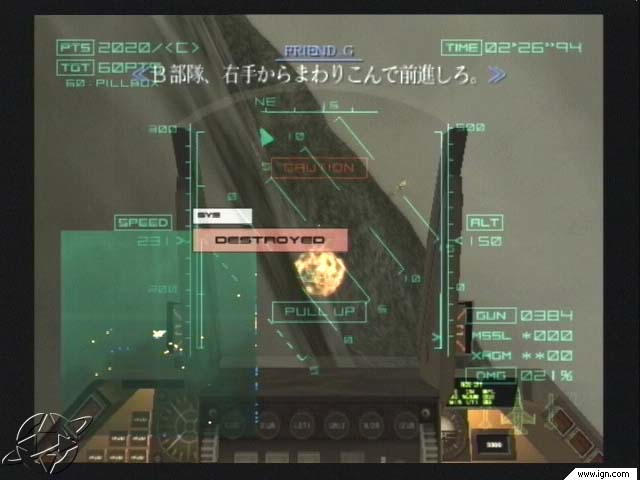 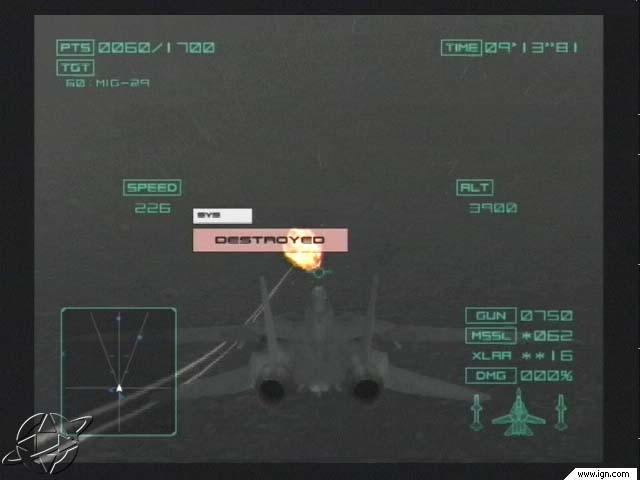 Graphics: Ace Combat 04 has one thing that definitely won't let you down -- great visuals. The planes look and move very realistically and the environments, lighting effects, and the special effects are all terrific as well. You have never seen anything like this on the PS2. The graphics are just one part of this great experience. This game looks amazing.

Sound: Ace Combat 04 isn't missing anything in this category. It has everything from jet engines screaming to missiles soaring to bombs exploding, all very well and uniquely done, almost to the point that you feel as if you are really flying a jet.

Gameplay: This is arguably the greatest aspect of Ace Combat 04. It is definitely a game that will push your adrenaline to the edge. Whether you're chasing down enemy Yellow Thirteens or chasing down enemy aircraft deep within a narrow canyon while running from other enemy aircraft, you always feel like you're in flight in this extremely fast fighter jet, and somehow all of this flying around and massive amounts of carnage ties in with a pretty good story.

Story: Now, what you've all been waiting for, the story. The whole story of AC4 is based around a kid whose father was killed in a dog fight with the Yellow Thirteens, a squadron of very well-trained Fighter Pilots, supposedly invincible. His village is being overrun by enemy forces each and every mission. As you go through each mission, destroying bases, protecting certain targets, you stumble upon the Yellow Thirteens a few times, usually retreating each time or going into minor dog fights. Basically the story goes on from there, concluding with some epic battles. Eventually, the boy's village is freed from the enemy power and you'll find out what happens with the boy. It may not sound like a great story, but, you'll just have to see for yourself.

Replay Value: After you beat the game for the first time, there's still much more to do. You can enjoy playing this game multiplayer with a friend (sorry no co-op) as you two race around, trying to avoid each other's missiles while trying to get one of your own to strike your friend's machine of mass carnage. There are a few more things to unlock, such as several bonus jets that can only be unlocked by completing the game with an "S" ranking on every mission on varying difficulties. You can also buy several different paint jobs for each jet, which is just another really cool unlockable. However, in the end, it seems that beating the game over and over can be very repetitive at times, and the number of unlockables are still limited.

Learning Curve: Another great quality this game shares with other classics is that it is very easy to pick up and play. The arcade fighter jet controls make turning, planting bombs right in the middle of key targets, and even pulling off complete loops a breeze. Still, avoiding large building may be found hard at first for beginners, and very frustrating when you accidentally clip one and are forced to restart as a result. But this game makes you feel good about yourself after you get back up from such defeats at the end of missions. This is a beginner-friendly game.

Overall, this is definitely one of, if not the best, PS2 game I have played in my years of owning the console. Great story, great graphics, and outstanding gameplay make this game a must own for all PS2 owners.