Namco's Ace in the Hole for the 3DS 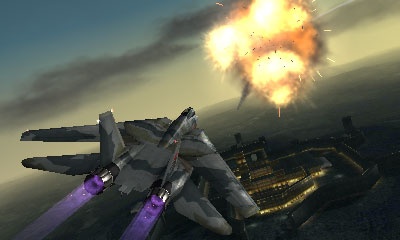 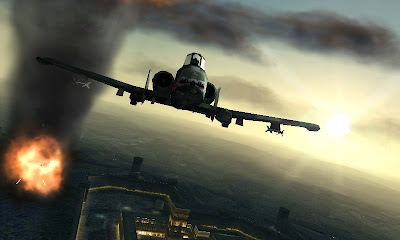 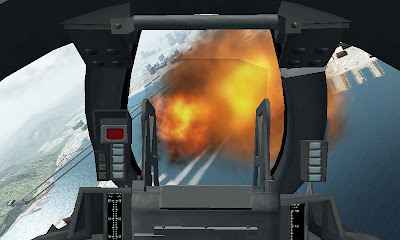 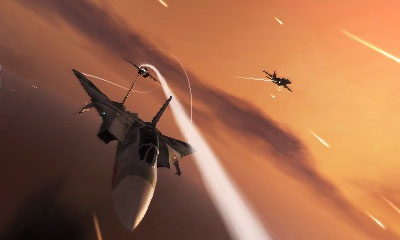 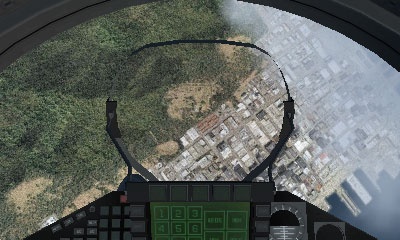 The Ace Combat series is one that has not appeared that much on Nintendo platforms. It has mostly been a PlayStation franchise. Now Namco is setting its sights on the Nintendo 3DS with a new installment of the popular dog-fighting franchise. While the HD twins received the Call of Duty-inspired Assault Horizon, the 3DS gets a more traditional Ace Combat in Ace Combat: Assault Horizon Legacy, a remake of the second Ace Combat game. As someone new to the Ace Combat series, this obviously does not matter to me. It is a totally fresh experience. Does Namco's 3DS ace soar high in the sky or does it crash and burn?

Despite all the context and mission briefings you can opt to sit through, the story of Ace Combat 3DS is quite simple. You play as Phoenix, an up and coming pilot for the Allied Forces who is tasked with accomplishing various missions to root out the Rebel Forces from the USEA continent. That is really the extent of the story. As you progress through the 21 missions of the game, you gain infamy as a promising pilot. Through humble beginnings you are eventually considered a god of the air by the end of the game. Additionally, you take on rival groups of pilots such as Cocoon and the Beast brigades in battle and face a mysterious pilot who controls a plane known as the Z.O.E. Unfortunately, this story arc really doesn't go anywhere and ends abruptly without any explanation.

At the start of each mission you are given a briefing by your superior officer played by Richard Epcar (He was Batou in the anime Ghost in the Shell: Stand Alone Complex). A map of the upcoming field of war is shown as he recites the plan of action for battle. Don't worry. You can skip this if you like, or you can have him -- Keynote-- explain the mission over again if you missed something.

From there you choose a plane to move out in. These planes are based off of real-world airplanes designed by Boeing and other popular manufacturers. At first you have a limited selection of aircraft to select from, but as you complete missions on the various difficulties (there's Easy, Normal, and Hard), you earn new planes. Of course, everything costs points (you gain points by completing missions, taking out enemies, etc.) if you want to use them. This goes for new crafts, new weapons such as bombs that can be dropped on ground forces, and upgrades for your various planes. Each plane has different attributes. Some are better at defense, some are better at maneuverability, some are better at speed, and so forth. Showing loyalty by using the same plane unlocks alternate colors and patterns for your them. It's purely an aesthetic touch, but it's nice to have anyway.

The missions themselves span the USEA continent as well as span objectives. One mission you will be escorting a fleet of Allied Forces battleships through a Rebel-infested channel while another you will be jetting through a narrow ravine, trying to catch up to and destroy the enemy's submarine before it can reach their base. My favorite mission was one where I had to destroy the enemy's stronghold set in Saint Ark. I demolished the anti-air defenses, had to fly through a claustrophobic passage to reach the enemy's core, and then I blew it up and called it a day. Saving the continent is such hard work, you know. However, not all of the missions are a bed of proverbial roses. One has you chasing a missile that is set to obliterate a city. The missile goes so fast that catching up with it is more of a fluke than a plan. Regardless, the missions are perfect for a handheld as they are relatively short. The longest mission I faced was approximately ten minutes long. Even then if you fail through either not meeting the objective, through crashing, or through being shot down, then -- if the game permits-- you can choose to start from a checkpoint. The only catch to this is that all of the points you earned in the mission prior to your failing go bye-bye.

At the conclusion of a successful mission you can view a replay of your handiwork and even save it for future watching pleasure, receive bonus points for every enemy you downed, and earn a rank based on how well you performed (C being the worst, S being the best). I haven't really gotten the science perfected on how ranks are handed out. Sometimes I'd go fast and kill everyone and still get but a B or A rank while on other occasions I'd take my sweet time and be selective with my killing and earn an S rank. You cannot see this but I am shrugging right now with an "I don't know" look on my face.

The actual flying and dog-fighting in Ace Combat: Assault Horizon Legacy is excellent and feels wonderful. Unlike something like Star Fox 64 3D, you need to hold down the R button to accelerate if you want to actually go anything that could be considered fast. The B button serves as your machine gun which you have an infinite supply of ammunition for while the A button acts as your secondary fire button for missiles and bombs (you can change between the two with the right and left directions on the d-pad).

In battle you will find that the Y button is a godsend. Not only is it crucial for getting behind foes, but it is also imperative for dodging opponents' missile barrages. When you are within a Rebel craft's airspace, a circular gauge on the 3D screen will fill up. As long as you stay close to the craft the gauge will continue to rise. Once it fills halfway or all the way you can perform an attack maneuver which starts a quick cutscene of your plane flying behind the enemy's. You can then target your foe and lock on with either machine gun fire or take them out altogether with a missile or two. Nonetheless, enemies can also use missiles against you. When this happens a warning box appears on the 3D screen around your vessel. You only have a second or two (or less in Hard mode) to press Y and the proper direction shown (either left or right with the circle pad) to take evasive maneuvers and avoid your assailant's attempt to rock your world.

Despite the game only having 21 or so bite-sized missions, you cannot play them all in one play-through. There are at least three points in the story where you must choose between two mission arcs. No matter which path you decide on, you always end up at the same place by the end of the game. As stated previously, there are three difficulties to select from, multiple medals to earn through completing goals like downing 200 enemies, beating the game on Hard, and achieving an S rank on every mission. Buying every craft, weapon, and upgrade for engines, armor, wings, and more will take you some time too, and as you progress through the main campaign you will unlock endurance and survival missions that are much more challenging than most of the story. Don't be fooled -- there's a large chunk of content to be had in Ace Combat 3DS. Sadly though, there is no multiplayer to speak of. This is all solo fun.

Ace Combat on 3DS is impressive to look at. The stereoscopic 3D is amazing (especially the cockpit view) and makes the aerial encounters all the more engaging on the eyes. Some of the ground textures when you're close to them are a bit muddy, but everything else from the environments to the special particle effects and explosions, to the sun sparkling on the ocean make for some very nice visuals. The frame-rate chugs along without any problems as well. The constant radio chatter with authentic garbled speech makes you feel like you're right there in the action, and the music is one part rock soundtrack and one part intense classical score. This is the genuine article presentation-wise here, folks.

Ace Combat: Assault Horizon Legacy somehow manages to be better than its HD counterparts despite being on a handheld. The missions are brief (great for short bursts and quick play sessions) but there are enough to make you feel like you didn't get ripped off out of your $39.99 MSRP. The game runs well on 3DS hardware, and it has plenty of pleasing graphical touches without any turbulence. Ace Combat: Assault Horizon Legacy flies high on the ever-growing 3DS library, and it is one game that indubitably earns its high marks.