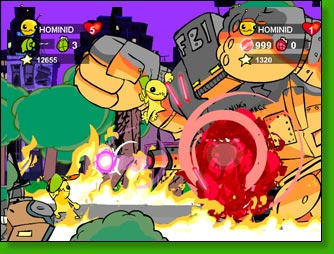 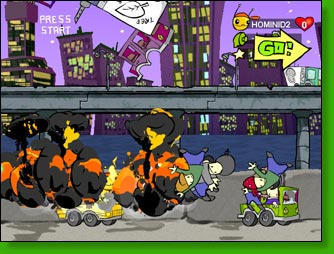 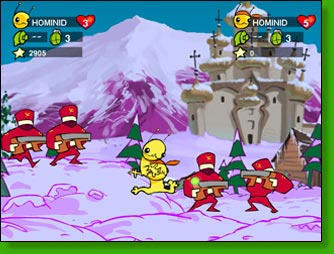 For many people who grew up in the 2D era of gaming, a special place has been reserved in their hearts for the classic 2D horizontal shooter. I'm no exception. My favorite game of all time is the original Contra for NES. There's something terribly satisfying about running along with tons of firepower and just shooting everything you see. Unfortunately, this genre is past its prime, and most current 2D shooters are simply re-releases of old Metal Slug games or mediocre new games bearing the Contra name that simply can't stand up to the old 8-bit and 16-bit releases. Enter Alien Hominid, a game created by people who, like me, were wondering what had happened to 2D games. Developed by The Behemoth, Alien Hominid is truly the freshest new shooter I've seen in a couple years, and it's a great experience.

This game started as a barebones online Flash game, but it quickly became apparent that it was destined for more than just a free download as over 6 million people played it. This is one of those games that essentially skips the bother of an enticing story. You're an alien and your UFO has crash-landed on earth. The feds are out in force to capture you, but you've got guns...BIG GUNS...and you've gotta get your UFO back. Meh. Not so exciting. What is exciting is the fact that the developers put lots of TLC into the game to make it run like a well-oiled machine. The action is non-stop, each level offers some sort of new gimmick (for instance, you can pilot an angry yeti and use it to smash Soviet guard towers), and your cute little alien has a mess of moves at his disposal. You can shoot, lob grenades, throw enemies, bite their heads off, or burrow under the ground to lie in wait for unsuspecting baddies. Beyond this, there are hordes of bad guys to shoot, and PLENTY of the gigantic boss robots that are pretty much standard in this sort of game. You typically get two or three big nasties in each level, and there are something like 15 levels. It's actually pretty lengthy by shooter standards, taking around an hour from beginning to end. It's also got a few difficulty options to keep you playing as you rack up new hats for your hominid to wear as you play.

Not everything is perfect in this game, but then again, no game can claim to be perfect. The developers wisely chose to make this a bona-fide classic shooter by going with single-shot deaths. If you take even one bullet, you're toast. There are shields available throughout the game that will absorb 1 shot each, but even with them, there's going to be plenty of dying going on. This can be good or bad, depending on who you ask. I personally like it, but I'm a purist. It forces you to at least become competent at the game before you win it. Not a bad request, in my opinion. Another potential problem arises on account of the graphics. The entire game features hand-drawn, cartoonish graphics that are a throwback from the 16-bit era. The animation is very fluid and quite funny at times, but if you're used to computer-generated images and gorgeous cut-scenes, you won't find them here. Another graphics-related problem relates to enemy bullets. They glow a little bit, but more often than not, there's something big exploding on-screen that makes these deadly dots nearly impossible to see...and if you can't see them, they will kill you without asking permission. It's very confusing and rather frustrating when your hominid keels over after getting hit by something you couldn't possibly see.

Overall, I really enjoy Alien Hominid and can whole-heartedly recommend it to anyone who remembers the good ole days of shooters or is just bored of all the cookie-cutter crap being developed by so many companies nowadays. Compared with the hundreds of FPS and 3D platformers out there these days, a down-to-earth 2D shooter almost seems like a revolutionary concept. It doesn't have many bells and whistles, but it's damn fun. I spent a few hours playing with my girlfriend this weekend, and we both had a blast. Also, the price tag is easy to handle: Only $29.99 brand new! Give it a shot. You won't be losing out much if you don't like it, because there are plenty of folks on GameTZ who would eagerly snatch it up if you decided to trade it. At least give it a try. If nothing else, it's fun for its sheerly-outrageous nature.