Spidey's Back, and though a tie-in, Beenox has brought him back to respectability with the best Spiderman game to date. 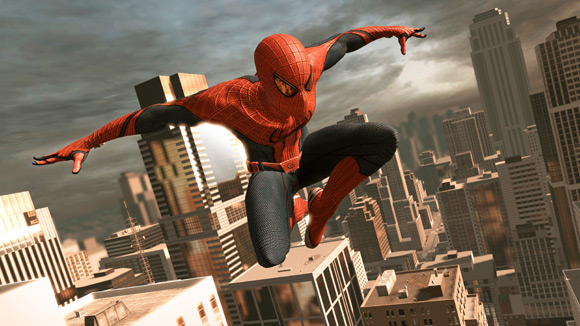 The Amazing Spiderman is coming up in theaters, as a re-boot for the franchise, and of course we have another movie tie in game. Overall Beenox, though limited on time because of the license of the movie, has produced the best Spidey game since Spiderman 2.

The Amazing Spiderman game picks up where the movie is going to leave off. Peter Parker is snooping though Oscorp with Gwen trying to find out if Smythe, one of the leaders of Oscorp after Conners, is still creating a virus to create cross species and of course they are. The scene gets out of hand and has one of the specimens breaks free. He infects Gwen by biting her and this is where the fun begins. The game overall tells the story within a closed, linear fashion when within buildings and such. It works much like Batman Arkham City and Arkham Asylum. Its really ripped the formula right out of the Batman, but lets face it, that's not a bad formula for a super-hero game.

The Amazing Spiderman, does an OK job overall with the story telling and its actually a serviceable story. The charters are likable and do a OK job with voice-acting. All of the movie people are here. Even the Lizard makes an appearance in the game and Conners plays a pretty big part as the game goes on. Trying to create an antidote for Gwen, he has lost his arm which is going to be some sort of movie spoiler. Of course they don't expand on how, but I'm sure when all see the movie, if like me they will have that moment of "Ah, that's how that happened."

The game's graphics are pretty good. The character models outside of the Villains and Spidey are a little rough, and some animations are just slightly off in terms of the linking people together. When someone touches another there is a viable gap and all. It's just a little awkward. When swinging around the city, it is fantastic. New York City is nicely modeled, and does a great job lighting and visuals. One thing that many will notice is Spiderman swings from the sky instead of buildings. This is really one of the only big misses by Beenox when doing the game. It just looks weird. Make NO mistake, that takes nothing away from the gameplay and swinging, which is AWESOME.

The combat system in Batman is here, with the hit and dodge and does look really nice when performing attacks. It is something that some reviews have ripped a little bit, but I disagree. This looks really nice and plays very good too. It can be a little simplistic and can be make a little Web-Rush mode which is like Batman's detective mode. It is fun though.

Boss fights are fun, but they are a little on the easy side which is slightly disappointing when playing a game that you would expect the bosses to have similar attributes to you.

This all does though, take us back to the roots of the Spiderman 2 which is the best Spiderman game up to this point, but The Amazing Spiderman takes the thrown from it.

The game isnt perfect, but you can't help but have fun with the Amazing Spiderman. This is a re-tread of the Batman games in many, many ways. Which makes it seem just slightly stale after two Batman games that perfected the formula. That doesn't mean however that the game is bad, its fun and there is a ton to do even after the credits role. There are magazine pieces to collect which unlock Spiderman Comics for you to read and there are an absolute TON of these. Hundreds, probably even pushing a thousand. If your a loot hunter than this is definable the game for you. It also has tons of infected people to save and side missions to complete. There are also pictures to take for a local news person that gives you her camera which also adds to the side missions.

Overall the story took me about 6-7 hours to complete, but there is a ton like I said if you want to just swing around the city. There are actually some very solid side missions that have some length to them.

Sound is a wash, its a movie tie in so you get what you'd expect and all the rest is serviceable.

The Amazing Spiderman brings back what you know and love about Spiderman and does everything well. Its not GREAT, but its the best Spiderman to date and who doesn't love the feeling of floating around a City as Spiderman and seeing some amazing animations and just having fun. You'll smile when you play it and honestly, isn't that what gaming's all about? If your into super heroes pick this game up, even at the $60 price tag, I'm not disappointed I did.
Review Page Hits: 0 today (792 total)
mediahook