Painful even for the biggest of ATHF fans. 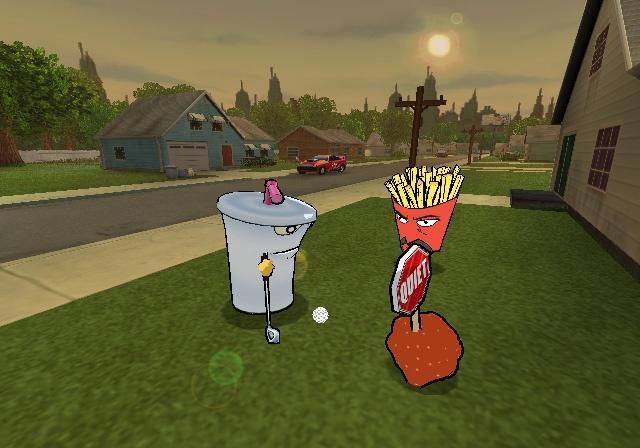 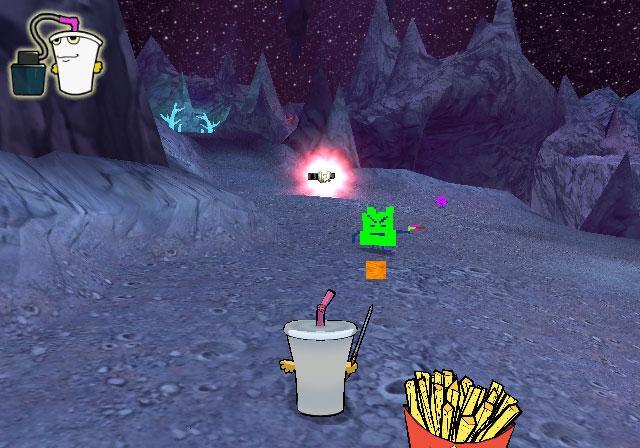 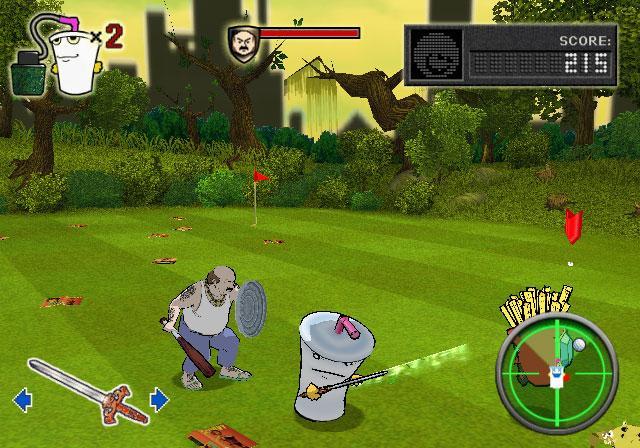 Aqua Teen Hunger Force: Zombie Ninja Pro-Am for the Playstation 2 is, to say the least, awful.

Starting with the graphics. The actual graphics of the game are no better than a normal game on the Playstation 1. Tolerable I guess, but the bird's eye view of the course is nearly useless. It's very hard to tell where is a safe place to drive the ball, because of the grainy map. The cutscenes are decent but the characters don't look right. They look as if someone else drew them. You can just tell it's a low quality game right away from the start screen.

Sound: sound is not so bad, and the voiceovers all sound good. Mastershake makes cup noises as he walks. No real reason to give the game a bad rating on sound.

Eww! Now we're at gameplay. The very first level of the game is a golf tutorial, it really doesn't even apply to the game very much. You can find your first cameo clip and Broodwich here. The following levels are torture. The golf part of the game is very basic, like NES golf basic. During your trip along the course you encounter enemies such as Carl's giant pubic lice, Tulip Snipers, Brownie Monsters and Black Mountain Scorpions. I can't emphasize enough how annoying this is! Not just a few per course either, like 50-90 per level! They are all over and the ones that can talk, like the Wisdom Cube, say the SAME things repeatedly! Though the only challenge to beating them is tolerating the redundancy of swinging your club (Mastershake) or shooting them (Frylock). No real challenge. Yeah, there are the usual power-ups. Frylock can obtain rockets, temporarily, among other things. Mulligans are useful, you find about two of those per level, as well as chainsaws, and double-barreled shotguns to name a few. This still doesn't negate the fact that there is no flight path indication, no overhead view, nothing to gauge the distance or path of the ball. There is an arrow off in the distance indicating where it may land and you can go to it with the R2 button, but it is of no help since it shows you a small area where you can't even turn, pan, or tilt the camera. As you approach the green there are boss-like challenges, for example, you fight Carl on the green in the second level. Not much more to the golf aspect of the game than that. In three of the twelve levels you race the Frat Aliens. These are not too bad. Once you find the Broodwich and cameo reel (if you want to collect them), the race is moderately entertaining.

Ok, so you have beat all twelve levels of the game. Are you ever going to put this disk back in to your PS2? Lemme answer that by saying "hellz naw!" I mean the initial play value is nil, so that should be a good indication of the replay value.

Learning curve got a decent rating, even though the lack of help from the camera and small course pretty much means you "swing and pray." For the most part, you can pick up the control and go with little to no practice.

Only ATHF fans will probably play through this game 100%. Fortunately for them, it is extremely short. Maybe some others will run though and knock it out just to have it on their "beat" list. Renting or borrowing it is a good idea unless of course you, like me, collect ATHF stuff. Adultswim/Williams Street should just stick to cartoons.