For what it's worth, Altair's Chronicles gives fans more of what they love while adhering to the DS casual crowd. 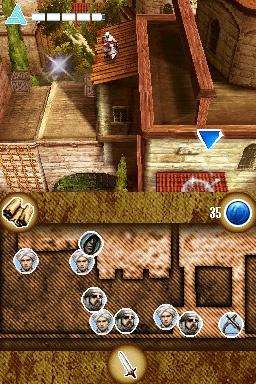 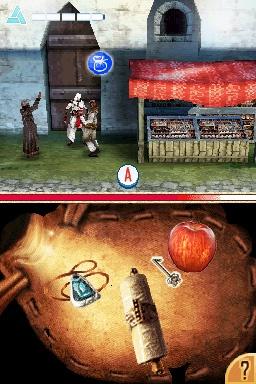 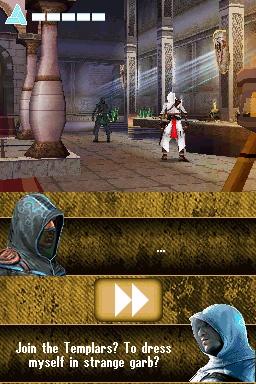 Assassin's Creed definitely made a big splash on consoles, proving to be one of the most popular and exciting titles of 2007. With such a huge fan base already gathered up, Altair's latest adventure rekindles the flame from the previous version while offering new and innovation segments that will surely keep you entertained. While Altair's Chronicles has its fair share of letdowns and problems, the core concept alone is one that will please fans and give DS owners a worthy title to play.

Altair's Chronicles takes place prior to the events of the console versions and also formidably omits the confusing sci-fi storyline in the process. The premise of Altair's Chronicles focuses solely on a mysterious object known as the chalice that has the power to end the devastating Crusades. Sure, the concept itself seems passable as a focal point in your adventures, but after the opening scene you will learn next to nothing about the chalice or its past. The story itself often feels detrimental to the console version which relied heavily on a well-catered story, something the handheld version fails to acknowledge throughout.

The main concept of Altair's Chronicles is about exploration. You will spend a great deal of time scourging the city for clues as to the chalice's location and whoever might be on the hunt for the item as well. Your travels will have you running in the streets, scaling rooftops, and doing other various acrobatic feats that only a master assassin could perform. Your effectiveness in performing these feats is the key to success for the majority of the game as you will see them plenty of times during every level. There are also some puzzle segments thrown in during exploration to make it feel a little more useful, but most of these feel slightly mundane as they are simply nothing more than pulling levers and jumping over gaps, actions that require no basic thinking whatsoever. There also seems to be an unnecessary huge amount of box stacking apparent, which kind of is a letdown since it is often confusing to get them to line up properly for you to advance. Still, don't let this overcome your decision as they are far and few between.

The same could be said about the boss battles as well. While Ubisoft tried to utilize an impressive mechanic while fighting, it ultimately boils down to being in the perfect position at the right time. For example, there was one moment when we were fighting an enemy and were prompted to push a button displayed on the screen. We missed our chance and simply waited for it to appear again, only it didn't show up till we made our way around the room again and stood in the same exact spot as before. Sure, it's notable to make the most out of utilizing button presses, but only being able to defeat an enemy by standing in one specific spot negates the fun of the process.

Combat in Altair's Chronicles is very similar to the console versions and it more than makes up for the barrenness of the boss fights. Combat is based primarily on sword fighting, which is mapped to the X and Y buttons. Altair can slash in both weak and strong stances as well as earn the ability to master combo and counter attacks later on. The same fluidness from the console versions are abound, just the necessity to use other weapons is completely withdrawn from this version. You do have the option to throw daggers from a distance and even use the newly acquired bombs as well, but the restraints of the DS tacked alongside the confusing touch-screen (you can only switch weapons by tapping the screen with the stylus) make it just easier to blindly slash at enemies.

The touch-screen minigames are fun to perform and offer a nice break from the basic exploration and combat segments. Besides being used as a map and inventory during most of the game, the bottom half of the DS will become useful when interrogating or pick pocketing enemies. During the interrogation segments, Altair must utilize the use of pressure points which are represented by circles that slowly dwindle away on the victim's body. By tapping these in succession you will ultimately force the enemy to surrender and spill the beans. Pick pocketing enemies is a bit more fun where you will use the stylus to erase the dark from an enemy's pocket and than guide an item from one end to the other without hitting anything else in the process. Both aren't overly complicated, but they do offer a nice break once in a while.

Altair's Chronicles looks exceptionally well for being so hindered by the low-processing power of the DS and still shows some brilliant flourishes from the console versions- such as birds that fly from rooftops and crowds reacting to your movements. There could have been more polish during the cutscenes as they are just still-pictures with dialogue that scrolls across, but that's only a minor gripe and nothing that really dumbs down the rest of the game. The sound features the same pros and cons as the visuals with distinct noises from the various towns and an impressive orchestral score, but enemies that sound alike in combat and the lack of a spoken dialogue during the story segments just feels bland at times.

For what it's worth, Altair's Chronicles gives fans more of what they love while adhering to the DS casual crowd. Although some slight problems exist, Altair's latest adventure is more of the same while offering new challenges and innovative segments. It is a little on the short side with a finishing time of only 4-5 hours, but fans of the series will no doubt enjoy donning the assassin's robe once more while waiting for that inevitable sequel to arrive.
Review Page Hits: 3 today (638 total)
mediahook