While it's on a new frontier, this one feels a little too familiar. 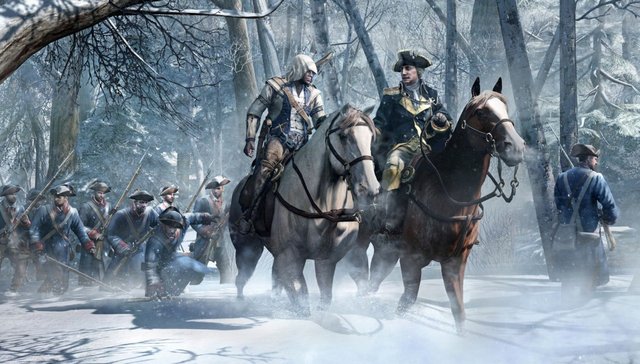 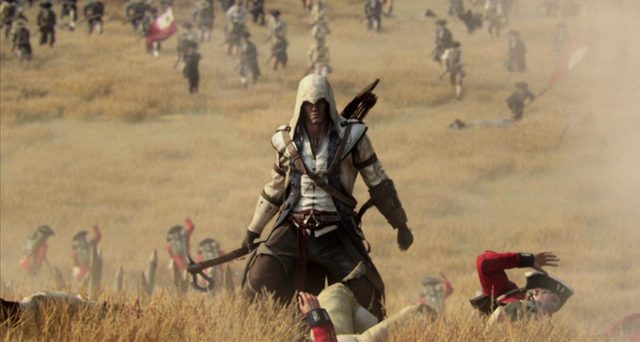 Games released on a yearly cycle tend to be bad for innovation, but good for the developer/publisher's pocketbooks. Every year a new Call of Duty is released and every year it breaks last year's record for pre-sales and first weekend sales, regardless of how much or how little has changed. Regardless of whether the changes within are for the good or for the bad. Assassin's Creed is another series following that yearly release cycle and has since Assassin's Creed II, when the series made a huge jump from a great idea to a great game.

Little was added to the world of Ezio and Desmond Miles after the second installment with the action taking place in the same world with multiplayer added and a few new games within the game to dive into. Fast forward to 2012 and people who may have skipped the last 2 games because they didn't appear different enough from ACII (I am one of those people) may have finally gotten what they want.

The setting of the story shifts to America as the country was being born in the middle of the 1770's. Gone is Ezio and gone is the world of Italy. You play as Connor, a Native American whose origin I will not reveal as it's an interesting portion of the story. The world outside of the Animus is not very different from past iterations of the game with Desmond Miles sitting in the chair, reliving his past relatives memories.

The first thing you will notice when diving into the story is how pretty the game looks and the amount of movement on the screen at any given time. Whether it's a bustling Boston street or a corn field with realistic moving corn as far as you can see, there is always something pretty to look at in front of you. The other thing you will notice is that the game starts slow. Very, very slow. It takes at least a few hours to get to the meat of the story and when there, you have even more tutorials thrown at you for an hour. The tutorials further in the game explain some of the new mechanics, like hunting, so they are necessary. It's just that there could have been quite a bit of time shaved off the first third of the game to get you into everything a bit faster. The opening of the game is good from a story perspective, but it keeps you away from everything the game has to offer, such as side missions and the aforementioned hunting, for far too long.

Once you get to the meat of the game, there is a ton to do. You can plow through the story rather quickly, less than 15 hours, but once done you will have many hours of other activities to complete. Even within the story missions there are optional objectives to complete and each mission can be replayed to attempt these. The objectives range from getting somewhere undetected or trying to kill your target a certain way. These help to spice up some of the story missions which otherwise might feel similar.

The side missions have some great variety as well and are quite a bit of fun this time around. Naval missions are introduced via the main story and you are able to upgrade your ship to take through a little over a dozen missions. You control the ship's movement with the ability to fire cannons from the left or right side, with a more accurate swivel gun to fire anywhere. The missions are typically you taking out other's fleets, but the controls work excellently and the water's physics and graphics are wonderfully done. Hunting might be the next best addition, fleshing out on what Red Dead Redemption did in its open world. You can trap animals, stalk them from the trees, skin them, sell the skin and at times you even have to defend from an attack. It might not be as deep as a full-fledged hunting game, but it's easily the most fun had hunting in a video game since RDR. Of course there are more standard side missions like deliveries, collectible hunting and an assassination guild you control.

Multiplayer here is well done as it actually strives to be different from just about any other multiplayer environment. The feel of the assassin is very well implemented as it is rarely a good idea to go running around a map trying to find your target. That right there is the main difference between other multiplayer games. You are given one target and they are not easy to find. Depending on the mode you are playing they are found via radar or by hearing whispers as you get closer. Everything is a one hit kill, but the thrill of the hunt makes up for the lack of brutal combat. A new co-op mode called Wolfpack has been added as well. You and your friends go traveling around a map, again looking for targets, but this time they are controlled by the AI. All up, the multiplayer options are quite a bit of fun and should give you even more play-time in addition to the amazing amount of things to do in the single player.

The star of the show here is the game's story, but not all of it. At some point since the 2nd installment you have either embraced or hated the modern day setting of Assassin's Creed's world for its very over-the-top plotline and even more ridiculous explanations within that plot-line You would embrace it for the fact that it makes no apologies for being as crazy as it is. This is also the very same reason someone might hate it.

No, the modern day story doesn't really make the game. The ending feels like it tries way too hard to be an "OMG!" moment but at the very least the ending is an actual ending. It's the Colonial American portion of things that turn out most interesting. Again, they are way too crazy to be taken seriously, but if you can suspend your disbelief, you might enjoy yourself. Some of America's founding fathers are here and placed within the story in ways not expected. People like George Washington, Charles Lee and Benjamin Franklin all make appearances. If you paid attention in history class, you'll enjoy a great number of historical references. The reference points are not just people, but events and places that most every American above the age of 12 should know.

Ubisoft is lucky that the story turned out so interesting, because the main character you take through these events is not. Connor is a slightly angry, mostly monotone avatar for Desmond Miles. He is definitely made to look like a bad-ass, but his personality is severely lacking. Ezio had at least some semblance of a sense of humor and his voice actor was interesting. Connor has neither of these things working in his favor, but the world around him is interesting enough to carry the game.

While much about this game is well done, there are some things to gripe about. Even though the buildings in Boston and New York look a lot different than those in Italy, they feel exactly the same. The same jump and climb points are there as you'd have seen in any Creed game prior to this one. Thankfully, the similar feel is broken up by a forest area which is quite a bit of fun to jump and climb around in. The other main issue, and one that has been there since we first used the Animus, is the combat. Like the recent Batman games, the system is based on counters and an attack button. One on one and the combat feels okay. Getting in the middle of a group is quite a bit less appealing. In most situations where you are surrounded, there will be times you have to counter 5 to 10 times before you can ever even hit your enemy. While this isn't much fun, it's probably the game telling you to find more stealthy methods and those are wonderful. It never gets old jumping on top of someone from the top of a building.

Those gripes aside, Assassin's Creed 3 is a great game. Those bored with the series because they've played the last three games might be disappointed when getting into this, as it's largely the same game it's always been with some new paint put on it. People new to the series, or who have always loved the game, will find a lot to like here. There is a ton of single player content and when you are done with that a fun multiplayer is there for you. Go ahead and get in the Animus, America needs some help getting started.
Review Page Hits: 0 today (744 total)
mediahook