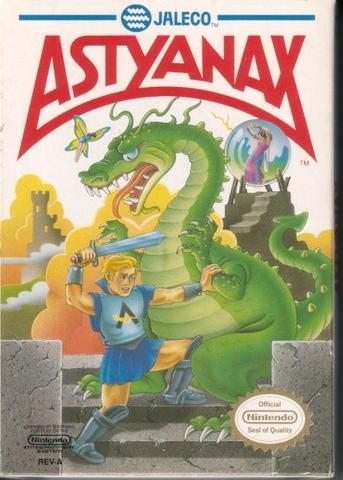 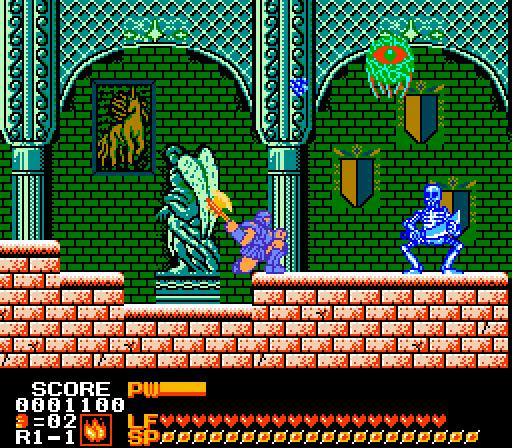 Astyanax is just like many NES games when looked at from present day: a pile of crap. There is really no other way to explain it. You can make excuses and allow leeway to developers of the time, but Jaleco delivers none of this. This game is crap and the localization department at Jaleco USA only made it worse.

This 2D side-scroller revolves around a high school freshman boy named, you guessed it, Astyanax. During one of the many riveting cut scenes, Astyanax tells us "my name is Greek...I think." Who wrote this script because they need some kind of award -- stat! He is being haunted during his beauty sleep by "probably the most beautiful girl you have ever seen," Princess Rosebud (and no, she is not a sled). All of the sudden on his walk home from school -- BAM! -- He is warped to the land of Remlia. I know, I know, jaw-dropping stuff! A fairy named Cutie is waiting for him, telling him he has to rescue the Princess from the evil wizard Blackhorn and his minions if he ever wants to go home. And so our adventure begins....

With his huge thighs, purple suit of armor and trusty axe/sword/spear/can opener/TV remote/cell phone, Astyanax is out to whoop 2D ass on all who stand in his path. Among those that stand in his path are flying grapes, Mexican jumping skeletons, Metroid-wannabes, fish-men whose spear guns are randomly jammed and my personal favorite, evil plants that spawn just as you are jumping onto a platform, sending you straight to your doom.

But the biggest enemy preventing Astyanax from possibly getting laid before any of his inexperienced friends (and by a princess nonetheless) is his awful game. Lame ass story aside, the controls are exactly what you would expect: one button for attack, one for jump, hold up and hit a button - magic. The developers tried to spice them up three ways, all of which complete fail. First is a parry move that only randomly works, usually when you can be left open to be attacked. Second is a morphing weapon that, regardless of what the manual says, really seems to do nothing other than change the image of the weapon. Third is a power meter that rewards those who don't hack and slash constantly with stronger attacks. Unfortunately, with the screen constantly filled with one hit kill flying fish and grapes, it is a bit hard to take advantage of it. Way to earn those checks development team!

What this game essentially boils down to is a 2D action with a tired-but-true Japanese storyline that wasn't worth its weight in yen when it came out, let alone now. There was so little to work with before localization, but Jaleco USA took that extra step to make this game a little extra crappy. A script written by the local middle schoolers, ridiculous cover art (my, what fat rolls you have Mr. Dragon), a mirrored screenshot on the back of the box and more hype surrounding absolute crap than a Limp Bizkit album (yep, they still make them).

Fun fact: According to Encyclopedia Mythica, the name of main character Astyanax comes from a character in Greek mythology that was killed as a baby during the fall of Troy. Too bad this game couldn't have met the same fate.
Review Page Hits: 0 today (148 total)
mediahook