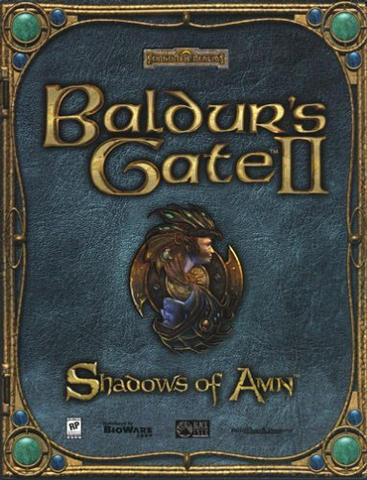 Baldur's Gate 2: Shadows of Amn is a great sequel to one of the best RPG series ever created.

This sequel begins with you and your companions from the first game being captured by a mad mage called Irenicus. When he kidnaps Imoen, a childhood friend from the first game, then the search is on for her and this is what most of the rest of the game is about. As you progress through the game, Irenicus and his allies torment you and try to make you realize what your destiny is, which is not really known until the expansion set, Throne of Bhaal. You continue on searching for Imoen until you finally face Irenicus.

This is a huge game, with plenty of action and story to keep you glued to your computer.

Many of the familiar characters from the first game are also in this game, as well as some new characters that will join your party if you so desire. Some will do so for a price, while others will ask you to do a quest for them in order to gain their services. They range from rogues to paladins, and they provide much help and add a lot to the story.

Whether you choose a male or female character as your main character, you will also have a chance to get involved romantically with one of your other companions of the opposite sex. This is not considered a necessity for the main plot, but it is certainly entertaining and worth a try, as well as gaining experience points along the way for it.

There are many different and exciting areas to explore, and the combat can be challenging at times.

The gameplay and interface are setup much the same way as the original game was, and you still have an adventuring party of up to six. One of the real convenient things about this game is that if you have to dismiss a party member in order to gain another one or do it for some other reason, than that companion will automatically go to a particular tavern and you can pick them up again at any time within that tavern.

Another great addition to this sequel is that the character classes now have "kits" that you can assign to them, for example Rangers can specialize as Archers, or Beast Masters. Paladins can specialize as Cavaliers or Undead Hunters. They each have special advantages to them, and some even will give extra damage to certain foes.

There are even new monsters to battle in this sequel, like Vampires and Wolfweres. Of course there is your typical beasts as well, like Umber Hulks, Beholders, Undead, and Mind Flayers.

Some of the power groups that you will get to know within the Baldur's Gate world include the Shadow Thieves, the Harpers, and the Cowled Wizards.

Just like the original, there are also great weapons, armor, and spells to use in this game, and your party will grow and advance to become great fighters, paladins, or wizards.

Another new part of this game adds a lot of new quests to your quest log, and that is the fact that each class has their own stronghold, and once you finish the quests related to that stronghold, then the stronghold becomes your base and a place that you can store equipment or items as well as a safe place to rest. There also will be more quests that are just for that particular stronghold. So I think that was a neat thing to do with this game, and it makes it very unique.

If there was anything at all that I disliked about this game, I think it would have to be that some of your companions (NPC's), would get impatient with you and just leave the party without any warnings, particularly those who wanted you to do something for them, so that was annoying at times.

Overall this game was great, and as I said before, it is a very large game, and it may take you months to complete, but believe me, it will be worthwhile. It will be an RPG experience that you will not soon forget.