Solid sports game for the NES 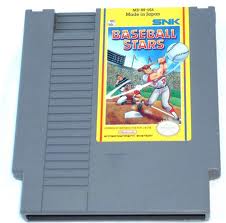 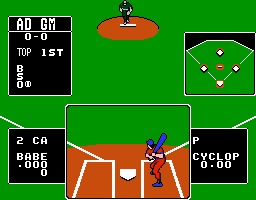 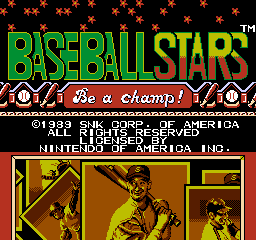 I hate sports games. I have always hated sports games. I suck at sports games which is probably a good part of my hate for them. I get trounced at hockey, basketball, football and usually baseball. I am halfway decent at golf games, volleyball and the motion controlled games of today. But as a general rule I avoid sports games, with one exception, Baseball Stars.

I first played Baseball Stars at my friend's house in 1990, I was 14 and already hated sports games. I got trounced as usual and grumbled some colorful language about the crap that is sports games. A few weeks later my friend got a SNES and had no use for his many many NES titles... so I borrowed them for awhile. This is what led me to playing Baseball Stars again. I didn't think it would happen but I was sitting there, bored with my games, bored with his games, and only one other game staring back at me.

Baseball Stars is a remarkably addictive game when any amount of time is spent with it. I love RPG's and play them endlessly and this plays a part in my enjoyment of Baseball Stars. You can use a pre-generated team or build one from scratch. Building a team from scratch is not dissimilar to the grind of RPG's, you build stats that you purchase with money you gain from the attendance of fans at each game. These stats are things like, hitting, batting (not sure what the difference is), defense, prestige, etc. I usually would create a team and build their prestige early, as prestige governs how many people attend your games and thus how much money you get per game. You could play an entire season of games on Baseball Stars. You could create a season with as many as 6 teams and 25 games played against each team. That is 375 games in a season, all of which can be controlled by the player, all by the computer, or a combination of both. Another remarkable feature of Baseball Stars is the use of female players. Before baseball stars and unfortunately for a long time after baseball stars, video game baseball did not feature female players. Baseball Stars is one of the incredibly few that broke this barrier.

The graphics are okay. There is nothing great here, nothing noteworthy. Blocky, pixelated characters, the ball is practically a square, the fans in the stands are a blur of colors. The worst part of all of this is that the frame rate suffers on this game a lot. Not sure how as the graphics being generated are sloppy at best, but you get the frame failure flash an unusual amount in this game.

The gameplay is solid and responsive. I remember thinking (both when I was a kid and in recent playing of the game) that the controls were off and not responding well. This is not the case, there is just a little timing and finesse to the utilization of these moves. The jump catch has to be used at the right moment, in the right spot. Unusual for older games, it is fairly unforgiving if you are a little off in your placement. The timing is a little more forgiving but not much. Same with the diving catch, same with the double play. The gameplay has a surprising number of features beyond the catch and throw typical of these old sports games. You actually feel the need to strategize at times. However, when your team gets a little more powerful the game gets ridiculously easy. It actually seems like opposing teams get worse when you get better. They drop the ball more often, throw to the wrong place, and pitch easier to your monster hitters. None of this is necessarily surprising for an old NES game, but for a game that is so well designed otherwise, I wish they had given the AI a little more care.