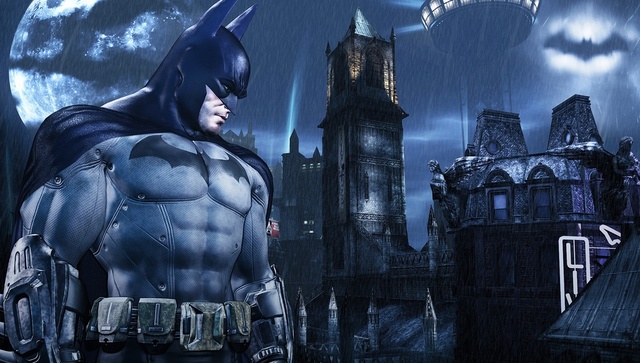 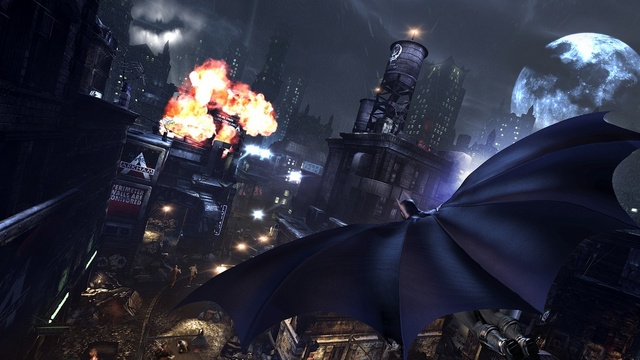 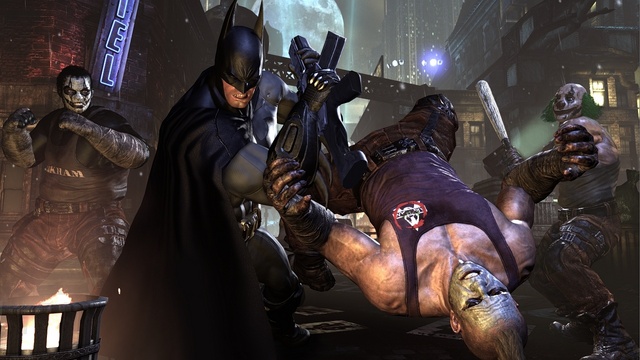 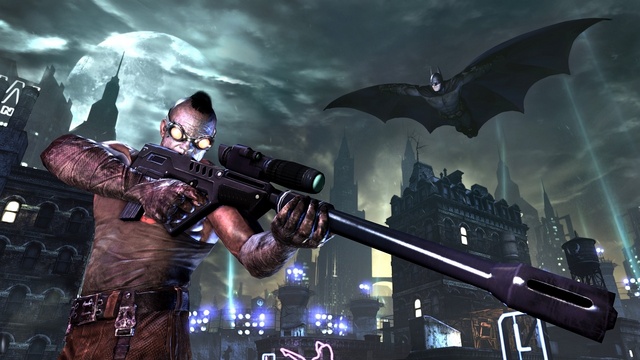 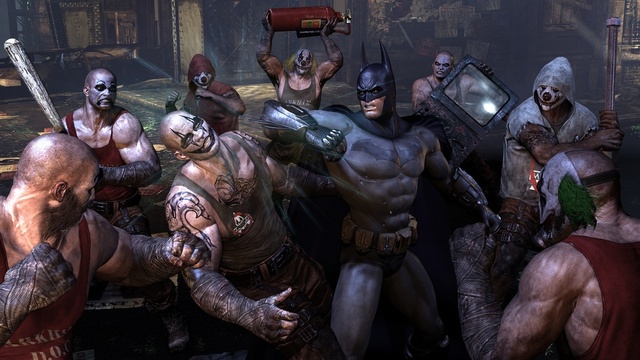 Before Arkham Asylum, many developers attempted their best to create the ultimate Batman experience. Many of these companies missed the mark completely and didn't come close to show what makes the dark knight who he is. Then in 2009, Rocksteady Studios came out with the Metroid-like game that was Batman: Arkham Asylum. It still stands as one of the bat's best entries and one of the better licensed superhero video games of all time. Now the crew and Batman is back with a larger, more open world feel with Batman: Arkham City. Should you don the familiar cape and cowl once more?

Arkham City begins with playboy millionaire (or is it billionaire?) Bruce Wayne holding a press conference in front of the gates of Arkham City. He calls for the crime-filled territory to be shut down immediately. Suddenly a group of TYGER soldiers ambush him, knock him out, and capture him, putting Wayne inside the hollowed walls of Arkham City. There he is once again introduced to Doctor Hugo Strange who warns Wayne that if he so much as bats an eye (no pun intended), Strange will reveal Batman's secret identity to the entire world. The mad doctor also mentions something about Protocol 10. Bruce breaks free of his shackles, calls upon the Batwing to drop his suit atop a building, and gets ready to rock and roll. The story is essentially a greatest hits of Batman's Rogue's Gallery. He will meet a myriad of memorable villains along his quest to discover the secret of Protocol 10. The game's story will keep players enthused throughout its 20-hour duration, and as new characters are met, biographies including their attributes and first comic appearance are listed for fans of Batman lore to dive into. This may be one of the bat's best stories told in any medium.

After Batman gets suited up, he'll have the coordinates of where he needs to go next labeled succinctly on his map. Arkham City isn't terribly large-- it's split up between districts such as Park Row, Amusement Mile, the Industrial portion, and much more. However, there's lots of locations to visit including the museum, the courthouse, the steel mill, the old subway station, the sewer, and the old Gotham City Police Department. Despite not being super sizable in scope (it takes about 3-5 minutes to travel from one side of the city to the other), there's plenty to see and do in Arkham City. For one, there's a plethora of Riddler challenges to complete. These can be as simple as finding Riddler trophies cleverly placed around the city on roofs, in alleys, hidden out of sight, and sometimes requiring Batman to solve a puzzle to open the lock containing a trophy, but they can also be more taxing such as popping Joker balloons, knocking out security cameras,and scanning certain objects as answers to riddles. There are over 400 Riddler challenges to finish off, and by completing a set amount, the enigmatic Riddler reveals the location of one of his hostages. To rescue all hostages, Batman must solve nearly all of the Riddler's challenges. To help, however, there are specially marked enemies (they will be surrounded by a green aura) that can be interrogated who divulge the locations of trophies and answers to riddles on the player's map. Who doesn't love the gosh darn Batman pumping information by holding his foot over a goon's ugly face?

Aside from Riddler challenges, there's also side missions to take part in. One has Batman answering the phone and tracking down the whereabouts of a serial killer who will slay his next victim if the dark knight fails to arrive at a set location before time runs out, while another has the bat investigating crime scenes to determine where the shooter is situated. Players will rescue political prisoners from a gang of goons, reunite a long lost couple, and participate in some augmented reality training where Batman must fly through a series of green holographic rings without once setting foot on the ground. These side missions add even more longevity to the game and add more towards the story. It's definitely worth one's while to take on all of these missions.

Traveling through the streets of Arkham and along the rooftops is painfully easy, and that's a good thing. Just point the camera up at a building with the right analog stick and press the right shoulder button to fire Batman's batclaw to have him propel himself up to the point of impact. Old Batsy can glide from rooftop to rooftop, dive bomb while in the air to gain more speed, and make up lots of ground this way.

Of course, his aerial acrobatics are just a part of what makes Batman Batman. He is an accomplished inventor, and he has the tools of the trade to assist him in his objectives. All of the gadgets from Arkham Asylum return, and are available for immediate use as soon as Bruce Wayne puts on his suit. There's the exploding gel which is used to blow up specific walls (which can be scanned in Detective Mode), the batarang that comes in standard and remote-controlled varieties, the batclaw which is used to pull things towards Batman, and new inventions such as freeze grenades that can clog up harmful steam-producing pipes so the dark knight can pass by them unhurt as well as freeze patches of water and enemies. There's also an item that detonates mines, disables a foe's gun, and makes otherwise dangerous and deadly gun turrets harmless, and there's the line launcher which acts as a zipline of sorts for Batman to cross chasms and gaps. He can shoot another mid-flight to change direction effortlessly.

Sometimes all of the tools and gadgets in the world aren't helpful. Sometimes Batman needs to let his fists do the talking. When this is the only course of action, players can rest assure that they'll be prepared for anything: be it a thug with a shield, armed guards, or TITAN-exposed psychopaths. The battles in Batman: Arkham City are usually the bat versus more than one enemy-- oftentimes a roomful of foes. In these situations, players can attack one baddie, focus on another, counter when prompted with a press of a button, and clear a room of thugs all the while maintaining a combo. The combat in Arkham City is essentially the same as in Arkham Asylum. It's fluid, fast, and frenetic. One can't just mash buttons and expect to win. Batman has to focus, maintain composure, and dodge when needed. It's astonishingly rewarding taking out a multitude of maniacs and landing the final slow-motion blow to the last thug standing.

While fast fists are often necessary to escape a difficult situation, there are other times when Batman will need to pull a Solid Snake and take a stealthy approach to the situation, such as when a room is filled with armed guards. Gunfire can take even the most brooding of superheroes down in an instant. It's only by taking out each guard one at a time that victory is achieved. Each time a guard is taken out, the rest of the bunch will run to the fallen guard's location. If Batman is spotted, he'll have to swiftly travel across the gargoyle statues in the room via his batclaw until the guards no longer see him. It's this cat and mouse game that players must participate in if they want to survive. It does get annoying about halfway through the game when normal enemies around Arkham City carry guns. It makes traveling all of a sudden much more dangerous and aggravating to accomplish.

As Batman takes out goons, completes missions, and progresses through the story, he gains valuable experience. As he gains levels, players can purchase upgrades with the points accumulated. There are boosts to the bat's armor that can better fend off melee attacks and gunfire, armor that doesn't send off heat signatures for better stealth action, upgrades to Batman's gadgets, and upgrades to his combo skills. One such upgrade gives Batman the ability, with correctly timed button presses, to fight foes and multiply his combo bonus much more easily. Leveling up everything will take some time to do, potentially multiple play-throughs, and with the New Game+ option that unlocks after the story is completed (this mode features harder enemies, but the player gets to keep all of his or her upgrades), this task isn't so difficult to perform.

Aside from the main game, much like in Arkham Asylum there are multiple unlockable Riddler challenge maps to try out. Each one puts Batman in either a combat challenge or predator challenge. Combat challenges are divided up between numerous rounds. It's the player's goal to go for the highest score possible through continuing and keeping combos going as well as not getting hit. In predator challenges, the player must complete three objectives to earn medals. These can be anything from defeating a foe while they're panicking after Batman drops a smoke pellet to using an inverted takedown on a goon to knock them out. There's a total of 96 medals for each type of challenge, so that adds even more longevity to Arkham City as a whole.

Batman: Arkham City is a pretty game, running on Epic Games' Unreal engine. Sure, Batman looks like he's been on steroids for years, and some characters are designed objectionably, but overall the game looks and runs smoothly. Little touches like newspapers and debris rolling in the wind across the derelict and dilapidated streets are wonderfully pleasing. The texture work is absolutely fascinating and fabulous, too. Kevin Conroy and Mark Hamill reprise their roles as Batman/Bruce Wayne and the Joker respectively, and it's sort of weird hearing them in a game so dark in tone after watching and hearing them in a child's cartoon in Batman: The Animated Series for the longest time. Regardless, both talents have never sounded better, and truly all of the voice actors sound terrific. The voice work is incredibly impressive, as is the game's orchestral score which features a choir for the main theme.

Batman: Arkham City is an excellent sequel to the already amazing Arkham Asylum. It just feels like a natural progression for the Batman brand. The game is decidedly dark in tone and full of secrets and side missions (the hunt for the Riddler's 400+ challenges and completing all of the challenge maps will take dozens upon dozens of hours). New Game+ adds even more time to an already meaty experience, and the top-notch presentation, skill-based combat system, and rewarding stealth gameplay all make Arkham City one of the best licensed games period and a definite contender for Game of the Year. Beware the bat as you'll lose sleep exploring the crime-infested streets of Arkham City.
Review Page Hits: 1 today (993 total)
mediahook