It's not too original but hell if it isn't fun. 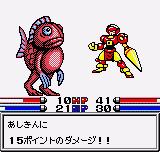 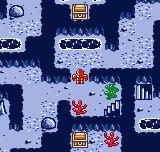 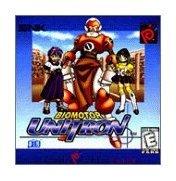 Biomotor Unitron was the first RPG on the Neo Geo Pocket Color. Your goal is to build up your unitron (mech creature) to become the Masters of Masters.


Gameplay
Much in the vain of Final Fantasy or Dragon Quest, Biomotor Unitron works on a random dungeon layout. But instead of traversing the areas in between towns and dungeons on foot, you simply choose from a menu. For example: to get to the forest you must leave the Works, go to the square in D-Town, and from there continue by choosing Forest. It cuts out a lot of time that RPGs normally take up. This leaves the item fetching strictly in the dungeons. Battles work much like Pokémon where one player goes first and chooses an attack and then the second player does the same with whomever's HP falling to 0 first losing.

You choose from one of five races (Lizardman, Forester, Human, Birdian, Mariner) at the beginning and from there build upon your unitron by buying parts at the shop and finding items in the dungeons. There are 8 different variants (Earth, Mirror, Fire, Dark, Water, Light, Wind, Wood) you can equip your unitron with and will also face in battle. Like normal, each variant has a weakness and a strength against another.

Aside from dungeons you can also enter tournaments to challenge your unitron's ability and gain experience.


Graphics & Sound
For a first generation Neo Geo Pocket Color game the graphics are nice and detailed. The characters are designed well and with all the customization of your unitron, each one is distinct. The environments at times can seem kind of simple but the animation during battles make up for this. The sound is nice as well with the theme song being quite catchy and not reparative/annoying.


Replay Value
Once you beat the game the only thing you can do is re-enter the random dungeons and tournaments to increase your unitron's strength. But the customization is so vast that you can replay the game many times with many different styles of unitron. This makes having three game slots to save your game in very handy.

This is a good first RPG effort for the Neo Geo Pocket color and a very solid one at that. The game is even playable on the original Neo Geo Pocket. Even though there isn't much to do after you beat the game, RPG fans will have a great time going back through and trying all the different unitron combinations.
Review Page Hits: 1 today (396 total)
mediahook